Beacon residents and visitors are being offered a free ride — gift-wrapped, in fact — for the next 16 months. But if they want it to continue, they have to climb aboard.

The Beacon G Route, a little-used Dutchess County line that began running through the city in 2013, received a significant upgrade this week when it was relaunched as the Beacon Free Loop. 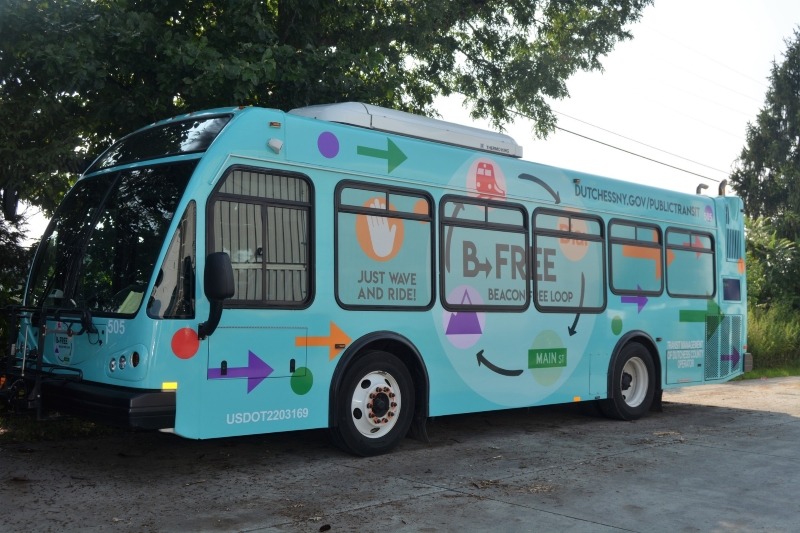 The bus operates from Monday to Saturday from 6 a.m. to 9 p.m. and will make stops at the Metro-North Station, Dia:Beacon, Main Street, the Mt. Beacon parking lot and other spots along its 23-minute route. The bus is operating now but its official launch will take place at 10 a.m. on Thursday, Aug. 30, at Polhill Park.

As its new name suggests, there’s no fare. “Anybody can ride the bus for nothing,” said Mayor Randy Casale. “Hopefully it will be a good way to start reducing traffic on Main Street.”

The route and times will be the same each day. At commuters’ rush hour, for example, the bus will leave the train station at 6:25 p.m. and make five stops before returning to the station at 6:48 p.m. In addition, twice a day the bus will travel to and from Poughkeepsie via Route 9 and Vassar Road.

“The loop bus has been in existence for several years, but there were a lot of barriers,” said Kelly Ellenwood, the most recent past president of BeaconArts, who last fall approached the City Council with the idea of giving the route a refresh. “People just didn’t know about it.”

Artwork by Kyra Husbands, a recent Beacon High School graduate, that will adorn a bus shelter along the line (Image provided)

There are two buses serving Beacon, and one has been given a facelift — although both will be “Free Loop” buses moving forward. Under Ellenwood’s direction, the new, bright “wrap” was created by BeaconArts President Rick Rogers, Brianne Linden of Marist College’s NorthRoad Communications — a student-run marketing and communications design firm — and former BeaconArts board member Kirsten Heincke of KHCreative.

In addition, BeaconArts curated and installed designs from local artists — including 2018 Beacon High School graduate Kyra Husbands, who was recognized by the Dutchess County Executive as a student with exceptional promise in the arts — in six bus shelters with funding from Dutchess Partners in the Arts. BeaconArts also plans to bring events to the bus and shelters this fall such as pop-up art lectures and concerts. 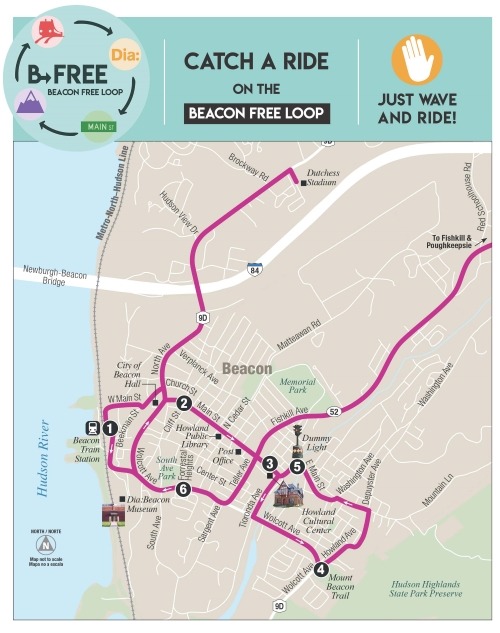 “You can walk to a lot of places in Beacon, but if you have a baby or groceries it’s not as easy,” she said. “This has been a concern of mine, and now I can get on the Beacon Free Loop and be home in minutes.”

The G Route has historically been the least-ridden route in the county, and over the past two years peaked at 389 riders per month. Some of the county’s other routes that serve larger populations and areas can draw more than 15,000 riders per month.

The City Council in May approved spending $5,000 this year and $11,000 in 2019 to subsidize the standard $1.75 fare, eliminating at least one barrier that may have contributed to low ridership.

“That can get expensive if you ride two or three times a week,” said Casale. He noted the bus can also be flagged down, as long as it’s safe for the driver to pull over.