We throw it away, and the Chinese buy it.

Or they did. For years, China was the world’s top purchaser of recycled materials, and the U.S. supplied 40 percent of its raw cardboard, paper and plastic. The material was remade into everything from shipping boxes to construction pipes.

That changed last year, when Chinese leaders announced plans to tackle the country’s historic pollution by recycling more material from its own waste. The rules seemingly changed overnight, said Steve Hastings, the director of municipal development for Republic Services, the company that hauls trash and recycling away from Beacon.

While Vietnam, Thailand and other countries continue to buy U.S. recyclables, the ripple effect of the disappearing Chinese market has reached the Highlands and nearly every other local market in the country, Hastings told the Beacon City Council at its Monday (Aug. 27) meeting. 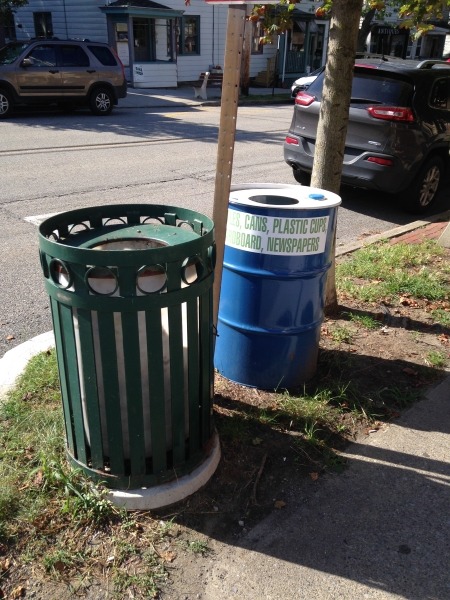 Cold Spring has placed separate cans around the village for trash and recyclables. (Photo by J. Simms)

China also banned the import of mixed paper (i.e., junk mail), which had accounted for 20 percent of its inbound stream.

As demand has plummeted, expenses have skyrocketed, Hastings said. A year ago, Beacon could sell a ton of recycled paper for $15, which added up to $16,000 in revenue in 2017. Today, City Administrator Anthony Ruggiero said, the city is paying $65 to dispose of that same ton. 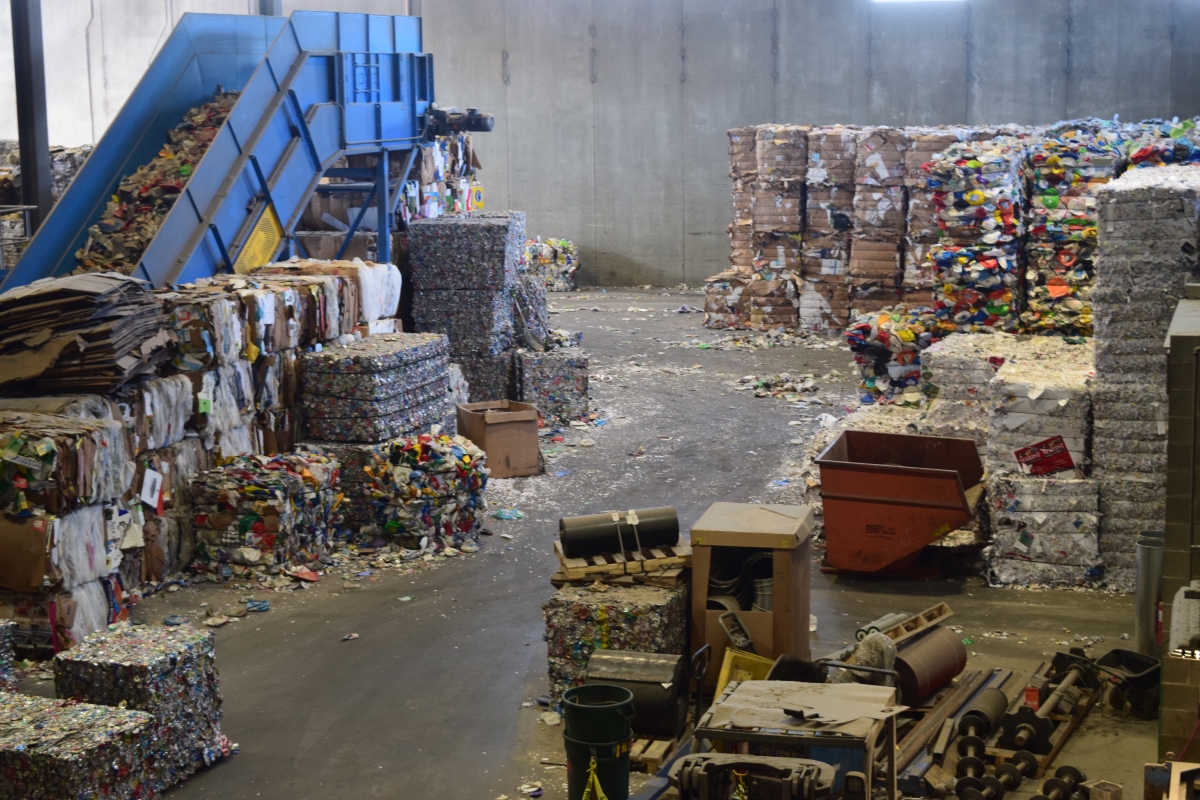 In Cold Spring, the village used to receive revenue for providing recyclables to ReCommunity, a firm in Beacon, said Deputy Mayor Marie Early, but as China stopped purchasing recyclables, the village had to start paying for the service. While the initial cost of recycling was about half that of trash disposal, Early said, the village now pays nearly $67 per ton for recyclables compared to $81.50 for a ton of garbage. Those figures do not include wages, fuel or vehicle maintenance, she noted.

Nelsonville is in the midst of a three-year contract with Royal Carting for recycling and trash collection, while Philipstown residents must contract privately with services such as Royal or Lombardo Carting but can take recyclables to the town landfill on Saturdays.

In June, the Beacon City Council approved a budget amendment to allow the city to pay for recycling disposal through the end of the year. It will begin wrestling with the 2019 budget next month, and it’s likely to include similar costs.

Refresher Course: How to Recycle

Clean materials of food residue. Rinse if necessary.
No stained cardboard, such as pizza boxes.
No caps or lids.
Labels can remain on cans.
No broken glass.
Do not flatten cans. Do flatten plastic containers.
No mixed paper in plastic bags.
No aerosol cans, ceramics, coat hangers, diapers, flower pots, foam plastics, light bulbs, mirrors, paint cans, plastic bags, plastic toys, printer cartridges, Pyrex or wood.
Alkaline batteries can be thrown in trash. Lithium or rechargeable batteries can be recycled at Home Depot.
Plastics must be marked 1, 2, 3, 5, 7 or 9.

“We all agree we want to recycle,” Ruggiero said, “but we’re going to have to do an educational program [for residents] because there’s so much contamination. It’s not going to be a quick fix.”

The recycling industry may “have to go back to the basics,” Hastings told the council on Monday. Across the country, single-stream recycling, which allows residents to place paper, plastic, glass and cans into one bin for curbside pickup, may need to be replaced by the old method of sorting recyclables into separate containers.

The new rule is “when in doubt, throw it out,” Hastings said. “For a long time, it was the opposite.”

But going back to the basics could introduce its own set of problems, such as the increased carbon footprint of expanding pickup services.

Sarah Womer, the founder of Zero to Go, a Beacon-based company that provides zero-waste event services and a compost pickup program for Beacon, says that if composting becomes as common as recycling, the contamination rate of recycled materials would likely fall.

“Forty percent of what we throw away is compostable,” Womer said. “If municipalities in the Hudson Valley would get on board with organic materials programs and make them accessible and understandable so that people would use them, it would definitely make a difference.” 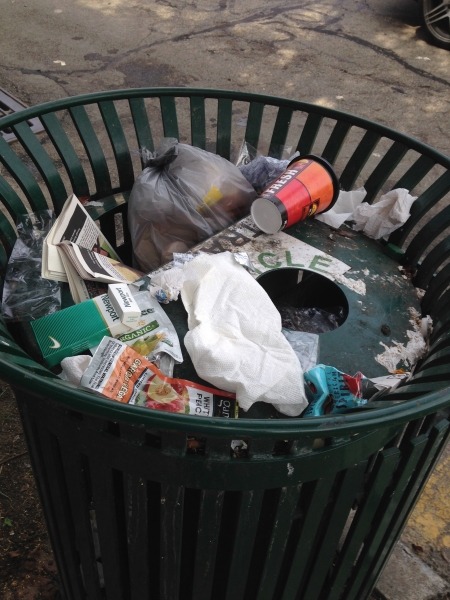 These two-in-one cans are supposed to separate trash and recycling on Main Street in Beacon. (Photo by J. Simms)

She points to Kingston, which secured a $63,000 state grant last year to develop a waste management program that includes composting.  The city’s municipally operated compost facility is expected to bring in more than $100,000 this year.

The market for compost, Womer added, wouldn’t be dependent on finding foreign buyers. “Every farm in the Hudson Valley buys yards and yards of compost every year, sometimes twice,” she said.

City Council member Amber Grant said on Monday that Beacon needs a “full-court press on teaching people how to recycle, but we also have to give them the tools to do it.” Grant cited the two-in-one trash and recycling cans on Main Street, which often overflow over weekends, as “set up to fail.”

Those cans will likely be replaced, Ruggiero said. But an educational campaign will still be necessary. “Every resident has got to want to help,” he said.

One thought on “A Recycling Problem”