As many as 100 tires were dumped this month in and near Indian Brook in Garrison, prompting an investigation by state and local officials.

About two weeks ago, dozens of truck, tractor, all-terrain vehicle and automobile tires were found in and along the brook from above the waterfall to about a quarter-mile upstream, near the hairpin turn on Indian Brook Road. 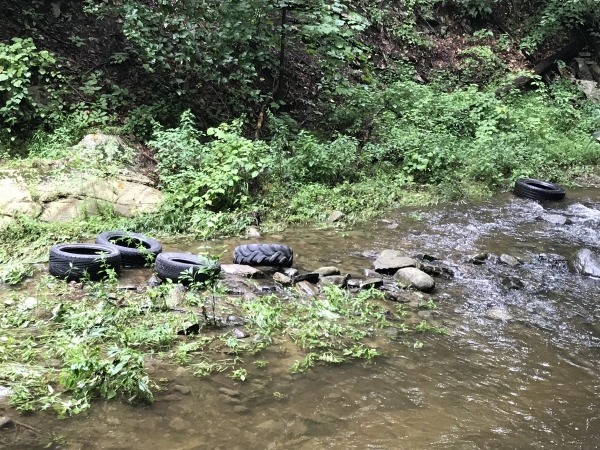 Philipstown resident David Marzollo said he noticed on Friday, Aug. 17, that a few tires had been tossed below Indian Brook Road as he prepared to go for a run.

“I thought pulling them up to the road would be my exercise for the day,” he recalled. “I care about that place. My friends and I have been going to Indian Brook all our lives.”

Marzollo, who is the son of Claudio Marzollo, a longtime member of the Philipstown Recreation Commission, and the late children’s book author Jean Marzollo, got more of a workout than he expected.

“I thought there were maybe a dozen tires” he said, but he ended up lugging 52 to the road. He left about a dozen tires in the brook because they had become embedded in the mud and were difficult to remove.

While he was placing the tires on the side of the road, a passerby, Paula Andros Provet, photographed him and his vehicle. “She thought I was the one dumping the tires!” he said with a laugh.

After realizing Marzollo was in cleanup mode, Provet thanked him for being “a savior of our beautiful environment” and shared her photos with the Hudson Highlands Land Trust and The Current. The land trust posted the images on Facebook, recognizing Marzollo as a “conservation hero.”

Evan Thompson, the manager of Fahnestock and Hudson Highlands State Parks, said another 12 tires were removed the next day (Aug. 18) from Indian Brook on state-owned land just above the waterfall. 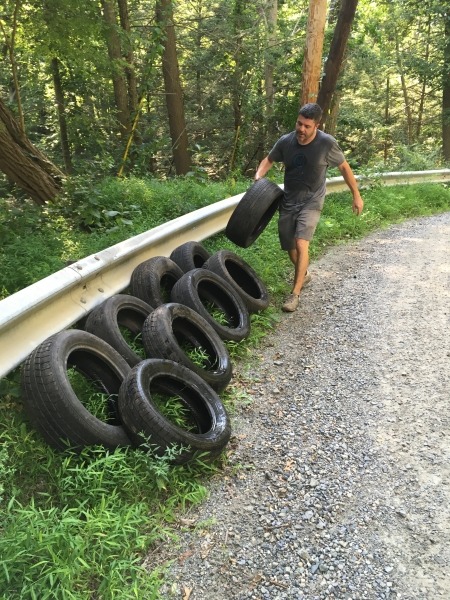 Dave Marzollo collected 52 tires on Aug. 24 that were illegally dumped in or near Indian Brook in Garrison. (Photo by Paula Provet)

George Lansbury, who lives on Avery Road, said he also removed a number of tires from the brook, which flows near his property. Those tires and the 52 collected by Marzollo were stacked near his driveway, waiting for disposal.

Lansbury said he has seen occasional littering along Indian Brook Road, “but never anything like this; this is astronomical.” He estimated that at least 100 tires have been dumped along the road and last week posted “No Dumping” signs on two trees at the hairpin turn that warn of video surveillance.

Lansbury said he was heartened by the number of residents who offered to help with the cleanup. He also hopes that efforts by the town and state, along with media coverage, will discourage further illegal dumping. “If people see something, they should say something,” he said.

Where to Take Your Tires

State law requires tire sellers to accept the same size and quantity of used tires for recycling when new tires are purchased or installed. But some retailers, as a community service, will accept any tires. Mavis Tire, for example, which has shops in Philipstown and Beacon, will recycle up to four passenger car tires per person, per year, even if not purchased from Mavis, for $1 each.

The Transfer Station in Beacon at 90 Dennings Ave. accepts waste tires from city residents, and people can drop tires for a fee at its transfer station at 409 Route 82 in Hopewell Junction. The Philipstown Recycling Center on Lane Gate Road does not take tires, nor does the Village of Cold Spring curbside program.

Waste tires are reduced by recycling plants to “crumb rubber” that can be repurposed as playground mats and construction products. (The steel belts are removed with magnets.) Used tires also can be retreaded, which requires 7 gallons of oil compared to 22 to manufacture a new tire.

As many as 20 million tires are discarded each year in New York State, according to the DEC. A $2.50 fee was added in 2003 to nearly every new tire sold in the state to fund the cleanup of tire dumps.

A woman who lives in the area who did not want to be named may have happened upon a culprit while driving along Indian Brook Road with a friend at about 10 p.m. on Aug. 22, five days after Marzollo’s efforts. She said she became suspicious of a truck stopped near the hairpin turn.

“There was a shirtless man standing at the back of a red pickup truck; it had a cap on the back,” she recalled. “He seemed startled when we stopped and immediately got in his truck and drove away fast.” 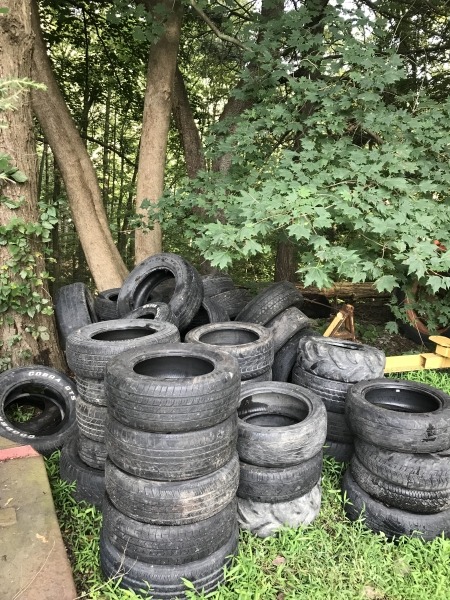 The tires were stacked waiting for disposal. (Photo provided)

She and her friend spotted a tire at the side of the road. When the site was checked in the morning, it was apparent that more tires had been rolled down the embankment. The incident was reported to the Putnam County Sheriff. (Anyone with information about illegal dumping also can alert the state Department of Environmental Conservation at 844-332-3267.)

Carl Frisenda, the Philipstown highway superintendent, said he met with town and state officials at Indian Brook on Tuesday (Aug. 28), and counted at least 20 tires still in the water. He said the sheriff and DEC are cooperating on the investigation.

One thought on “Tires Dumped into Indian Brook”