Dance and movement as communication is at the core of the many strands of Suzi Tortora’s work.

Tortora, who has been teaching classes, conducting workshops and working with children and adults for three decades, works, separately, in therapeutic and expressive modes.

The former intersects with the latter for the clients Tortora sees in psychotherapy sessions, which include the analysis of non-verbal cues as a way of understanding what is triggering them.

“The body is a map of all of our experiences,” she says. “Becoming attentive to the qualities of nonverbal cues provides a window into a person’s experience, expression and development of their sense of self. These qualities include the rhythm, tempo, muscular tension, spatial pathway and amount of strength used to perform the movement sequence. Each individual’s personal movement style is made up of a unique organization of these qualities.” 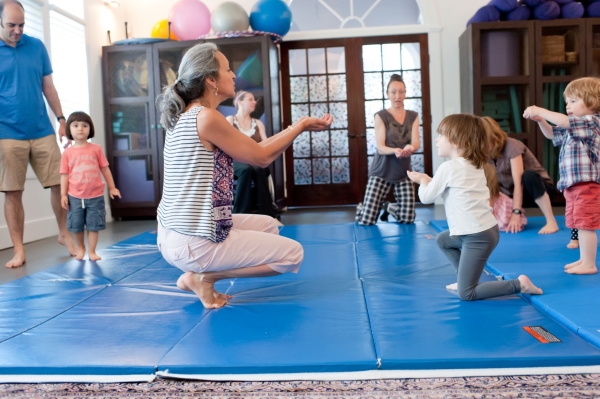 Working from Dancing Dialogue, her Cold Spring studio on lower Main Street, Tortora offers movement classes designed for infants, toddlers and elementary school children. Focusing on playful movement, with both stimulating and soothing activities, Tortora “guides parents into trust-building with their baby, which then assists the baby into trusting the world around them.”

When Tortora moved to Garrison in 1986, she was in the process of obtaining her doctorate, specializing in infant mental health. “I was then ‘cutting edge,’ as people were still debating whether babies had ‘minds,’ ” she recalls. She was also working with an osteopath in the city, who realized there were “medically unexplained symptoms for which he knew the physiology, but not the psychology.”

Tortora believes “a lot of chronic pain, for example, is a manifestation of adverse childhood conditions. There is a high correlation between severe childhood events and chronic health conditions. I grew my professional practice in that way, focusing particularly on the infant/parent bond.”

Shortly before she finished her doctorate, in 2001, Tortora moved into the Skybaby building, where she started offering dance classes.

“I like having the balance in working with neurotypical children [who follow a typical developmental path] and having a separate, therapeutic practice,” she says. Her classes took root after Tortora, with a young child of her own, became involved with a Mothers on Mondays group that worked on getting the Tots Park built in Cold Spring, among other projects.

There she met Polly Townsend, and at the urging of friends, the duo opened a preschool, which they ran for a year out of Townsend’s Garrison home.

“At the end of the year, Polly needed to use the space in her home for other purposes, so it ended,” Tortora recalls. “I realized I was more interested in running the dance piece than operating a preschool, and that was the impetus for beginning the dance classes.”

Word of mouth filled the classes, and they continue to this day (see suzitortora.com). Some of her first dancers are now in their 30s.

In addition to running her studio and her practice, Tortora travels widely to lecture and has developed an online training program. (One of her students uses it to work with refugees.) She also is the international medical creative arts therapy spokesperson for the Andréa Rizzo Foundation at Memorial Sloan Kettering Cancer Center and runs a dance/movement therapy program for the foundation called Drea’s Dream.