The Cold Spring Board of Trustees denied a request at its Sept. 4 meeting by Green Mountain Energy to promote its services on Main Street.

A Green Mountain representative, David Baumann, had asked the board to allow the company to set up a table in front of Kismet at Caryn’s at 72 Main St. through Thanksgiving to pitch residents and visitors on its renewable energy plans. The company often sets up a table on Main Street in Beacon. 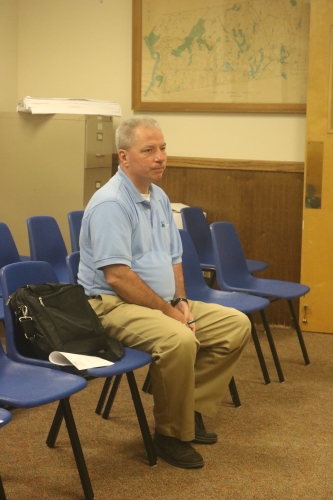 David Baumann of Green Mountain Energy at the Cold Spring Village Board meeting on Sept. 4 (Photo by M. Turton)

Trustees turned down the request by a 4-1 vote after Mayor Dave Merandy expressed concern over precedent and Trustee Steve Voloto questioned the company’s ties to NRG Energy, which last year had operating revenues of $10.6 billion.

“If we allow this to happen, that opens the door to other people who want to do the same exact thing,” Merandy said, noting that village code requires merchants to keep sidewalk merchandise within 3 feet of buildings. “I don’t know if we really want to have tables. It’s a narrow area.”

Voloto opposed the request mainly on environmental grounds. Most people interested in green energy “wouldn’t want to buy if they knew that your company is actually owned by one of the largest coal, oil and natural-gas energy companies,” he said.

“We are owned by NRG,” Baumann responded, noting that 100 percent of the energy offered by Green Mountain is generated from renewable sources. He also said the company has 600,000 customers nationwide and acknowledges its ownership by NRG when asked.

But Voloto suggested Green Mountain was “hoodwinking” customers by not saying up front where its revenue ends up. “The company that’s going to profit is as far from green energy as you can get,” he said, using an expletive. “Pardon my French!”

Merandy asked the audience to “forgive Steve’s little outburst; he’s passionate about energy and doing it right,” but questioned whether the village could lawfully deny Green Mountain’s request simply because the trustees didn’t like that the firm works with “big oil.”

On another front, Trustee Fran Murphy expressed concern that Green Mountain’s presence could confuse residents as the village contemplates the bulk purchase of electricity thorough the Community Choice Aggregate program.

Lynn Miller was the lone trustee to vote in favor of allowing Green Mountain to set up a table.

Trustees approved a photo shoot in the village today (Sept. 7) by 519 Productions, which will take photos for the electronics firm LG in the area of Depot Square, Rock Street and the riverfront.

The Philipstown Community Congress Trails Committee will host Philipstown Bikes Day on Sunday, Sept. 30, to show support for building a more bikeable and walkable community. Bikers, walkers and non-motorized movers will be invited to use a closed 1.7-mile loop east of Morris Avenue and Chestnut Street. Email [email protected] for information.