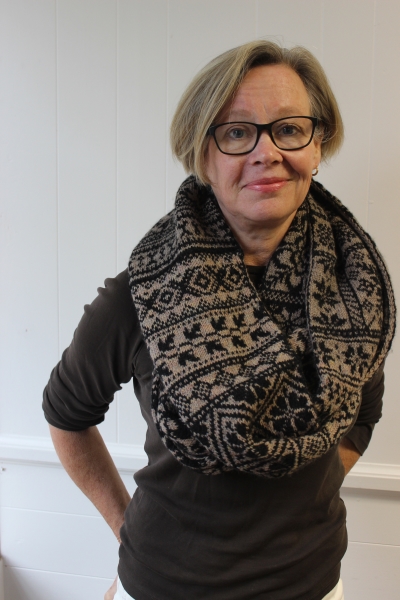 Alice Matthews, a native of Hot Springs, Arkansas, who now lives in Beacon, won multiple ribbons last month at the Dutchess County Fair for her knitting.

When did you start knitting?

In 1995, after a friend opened a knitting shop. Nobody starts out good. Even Yo-Yo Ma has to practice. It becomes a combination of aptitude and attitude. I’m a craft freak. My grandfather called me “dorky,” and not the admiring kind of dorky. I’ve become one of those old ladies who knits and cusses.

Do you enjoy the Knit Together group?

Oh, yes! It’s amazing. We meet at Howland Library every Tuesday morning at 10. Sometimes there are three people and other times there aren’t enough chairs. There are men and women; we love our men, when they come. Some people bring babies. We often do work for charities. Recently we knitted for Syrian refugees.

How does the fair judging work?

There are so many categories, and probably 300 to 400 entries. I’d never entered before. I never even knew it existed, but I have gardener friends who have won ribbons, and I wanted ribbons, too! I won Best Knitted Scarf/Cowl; Judge’s Choice; and a Blue Ribbon. My goal now is to compete at the Sheep and Wool Festival; that’s like the Nobel Prize or the MacArthur grant of knitting. Something like 60,000 people participate, people crazier than I am. But crazy is OK — it’s a victimless crime.

What is a cowl?

One continuous piece, doubled, and deceptively easy. I knitted a different piece I think is better, but I gave it away as a wedding present. The one that won is called Fair Isle, or “charted” knitting. Typically, they are historic patterns. This one had 19 charts, which look like graph paper. There are white and black sections and it’s simple, as long as you’re not drinking. I separate patterns by the “What you can watch on TV while you’re doing it” method. With the hardest things, I can’t watch anything. With the easiest one, I can watch a Japanese movie — and drink.

Did your professional life have anything to do with crafts?

Nope, although I’ve had a million jobs. My last job in Arkansas was at a newspaper called The Trucker. My worst job was as a car hop at Shoney’s, although they did have chocolate cake with ice cream and hot fudge that made it almost worth it. Now I’m retired and spending time in the yard and doing crafts. My husband and I wanted to get out of New York City. The first time we visited Cold Spring, we got two parking tickets and felt so welcomed we moved nearby.