Her dream wasn’t over — just deferred

The usual starry-eyed wannabe begins her trajectory to stardom after college (or even high school) setting the alarm for 3 a.m. to wait in line at open calls where she hopes to be noticed, let alone cast.

Then there’s Natalie Arneson. She put marriage and children first and pursued her dream with babies in tow.

The Putnam Valley resident put together an award-winning show, Mama Drama, spoken and sung, about the absurdities, frustrations and joys of mixing show biz and motherhood. Arneson will perform it at 7:30 p.m. on Saturday, Sept. 22, at the Philipstown Depot Theatre on Garrison’s Landing. 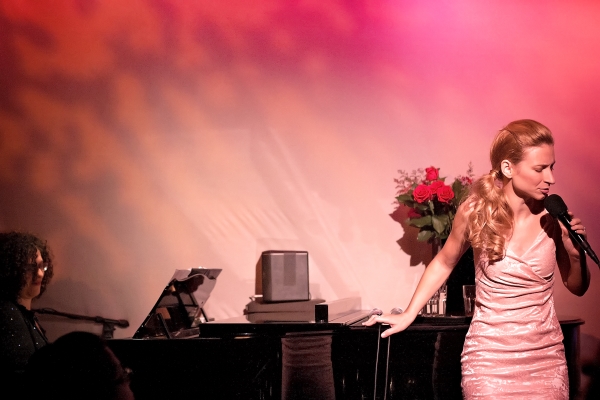 Arneson performs Mama Drama at the Metropolitan Room in 2014 with Tracy Stark at the piano. (Photo by Andreea Ballen)

She’ll be accompanied by music director Tracy Stark, drummer Tom Cunane and bassist Bob Renino, as well as Lisa Sabin (who lives the script, as well) and Joshua Lance Dixon. Tickets are $25 at brownpapertickets.com.

Raised in Houston, Arneson attended an acting conservatory in Guildford, England, and after graduating was cast as a “swing” (understudying many roles) in a West End production of The Woman in White. Unfortunately, the production company was not prepared legally to hire an American and withdrew the offer.

Crushed, Arneson returned home to think things over. She also met and married Kent Arneson, a lighting board operator for television and films. 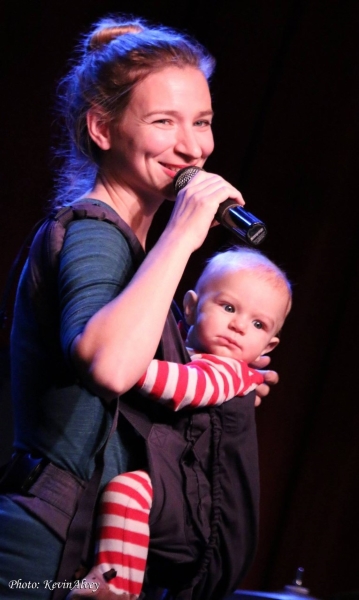 “I was at Birdland in New York City and Nikolai was too young to leave for very long — so when I wanted to sing at the open mic, he came along!” (Photo by Kevin Alvey)

“My plan was to stay in Houston, where I could always find work, and get my equity [union] card,” she recalls. “I was one show away from getting it. Then I found out I was pregnant.”

She and Kent planned to pursue their careers in New York City, but with a child, a great apartment, and family nearby, they lacked motivation. A hurricane changed their course, destroying the apartment and causing heavy damage to Houston’s theater district.

“We were staying with my parents and one day my husband said, ‘Why don’t we just go ahead and try New York?’ ” she says.

It was 2009, the height of the recession, and the Arneson family, including 11-month-old Chloe, landed in New York, knowing no one. “I was so excited, although it was all incredibly humbling,” Arneson says.

Natalie became a Starbucks barista for $9 an hour, and Kent worked in retail for $12. “I would get up at 4 a.m. to get on [the audition] line early,” she says. “Kent was picking up freelance work, and I kept auditioning. I would go with my breast pump. I joked that what I had become was so ridiculous, so laughable, that I should do a show about my life and call it Mama Drama.”

A few years later, her first attempt at that show “was all about my New York City experiences,” she says. Revisions shifted the focus to being a parent in the arts, and she fine-tuned to “make sure it would work in the best cabarets. I wanted the material to be tight and specific. Cabaret is different from traditional musical theater, because you are totally exposed” while alone onstage. 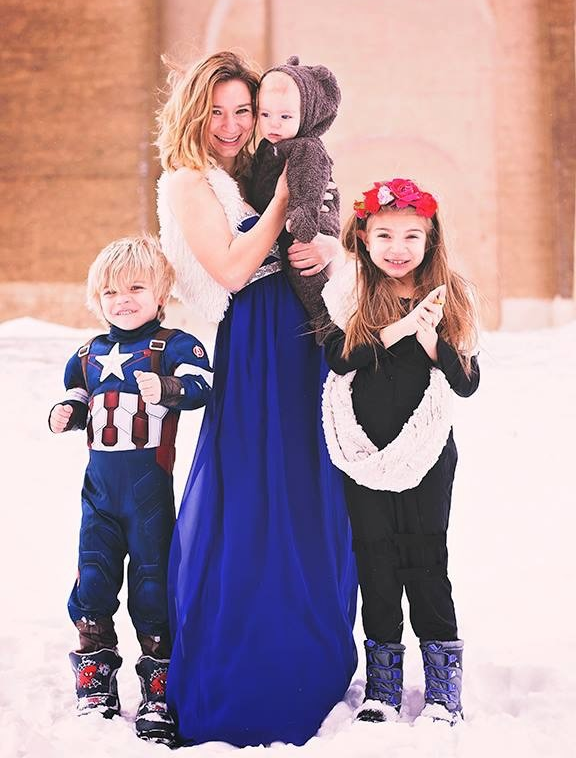 Arneson and her children (Photo by Andreea Ballen)

After Arneson performed the show in a competition at the Metropolitan Room and made it into the top 12, a booking agent emailed asking if she would perform it there again. She did, several times, despite being pregnant with baby No. 3. (The second had arrived about two years after the move to New York.)

Mama Drama won Arneson a Manhattan Association of Cabarets Award in 2016 for best New York debut. She continued performing the show, as well as a tribute to Peggy Lee. She has appeared frequently in the Sondheim Unplugged series at 54 Below, directed by Garrison’s Phil Geoffrey Bond, and will be seen at the Philipstown Depot Theatre again on Sept. 29 in Hello Jerry!, a musical tribute to Jerry Herman hosted by Bond.

In 2017, the Arneson family left the city, somewhat reluctantly, for Putnam Valley. Since moving, Arneson has directed musicals and plays at James O’Neill High School in Highland Falls and the Croton Academy of Art. This fall she plans to open Center Stage Putnam Valley to offer musical theater classes.

Auditioning for Broadway has been put on hold. “With no agent, going back on line is prohibitively expensive,” Arneson says. “For a while I was in an ‘actors with kids’ cooperative, but that gets difficult when they get older. I’m at a point when I’m perfectly happy to enjoy this time with my children. When they’re older, I’ll go back on line again.”