No medallion on Cold Spring plot

The Putnam County Veterans Service Agency assisted a Cold Spring family in getting recognition for their late grandfather as a veteran.

James V. Christian, who served in the U.S. Army during World War I, was recovering from battle wounds at Walter Reed Hospital when he met his future wife, Anna. After his release, the couple married and settled in Cold Spring, where they raised two sons and had seven grandchildren. 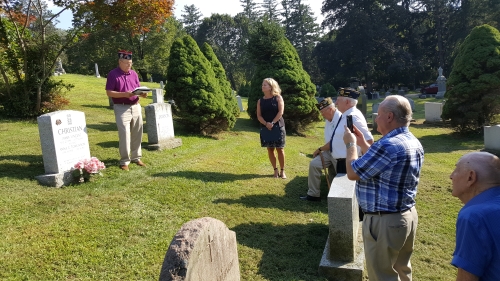 During a brief ceremony at Cold Spring Cemetery, a bronze medallion was added to the gravestone of James Christian, signifying his Army service.. (Photo provided)

Christian died in 1968 and is buried in Cold Spring Cemetery but nothing on his headstone indicated his status as a veteran. His granddaughter, Gail Christian Byrnes, contacted the agency and on Aug. 28 a bronze medallion was added to the stone.