Near the end of July, two vans packed with Highlands grandmothers and their supporters headed south from Beacon toward the Mexican border to protest a federal policy of separating undocumented families when they come into the U.S.

When the group, Grannies Respond, reached McAllen, Texas, eight days later, after making 10 stops in cities along the route, the caravan had grown to more than 200 people in 30 vehicles.

On Sept. 16, some of the participants spoke at Beacon Beahive about the trip. As Dan Aymar-Blair, the trip organizer, explained before the group left in July, the idea was to combine the moral authority of grandmothers with an event that tied into the legacy of journeys of protest, from the Freedom Riders to Gandhi’s March to the Sea. 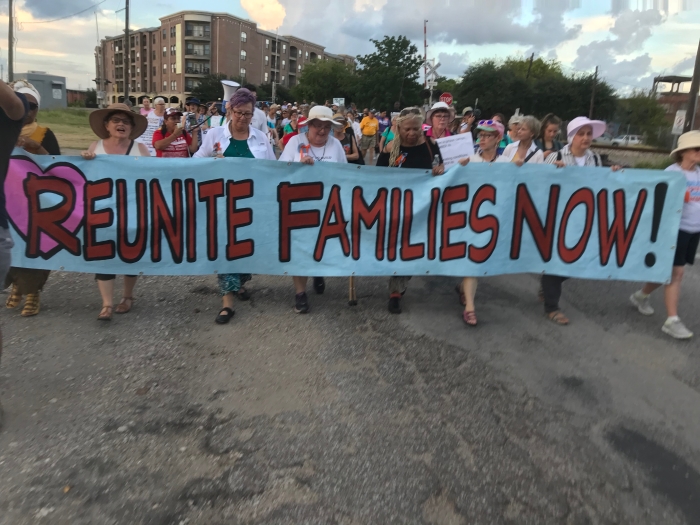 “Our idea was to protest, to have our voices heard, and hopefully make a difference,” he said on Sept. 16. “What happened was much different. A big part of the trip was about seeing the impact of this policy on human dignity and human lives. The things we saw were things we did not know we were going to see.”

After the group left Beacon, it stopped in New York City and twice in Pennsylvania, once to protest at the Berks County Residential Center (one of the oldest residential detention centers in the country) and in Pittsburgh, where they met Edith Bell, a 94-year-old Holocaust survivor and lifelong activist.

The participants said they encountered two situations repeatedly along their route:  Locals who were already protesting what they saw as injustices against immigrants (such as a group called Shut Down Berks) and community and religious groups who fed the travelers with potluck dinners and found them places to sleep.

“There was this sense that they were so glad that we were there to support them and the things that they were concerned about,” said Tina Bernstein, who made the trip.

In Louisville, the group met two asylum seekers who said they had fled political and gang violence in Central America. They were being sponsored by local Catholic groups while they awaited their hearings. 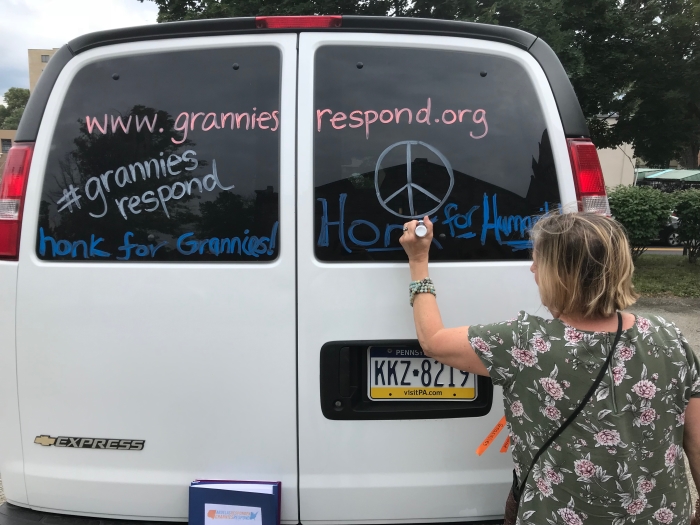 A marcher adds a message to the back of a van being used in the caravan. (Photo provided)

Carla, 28, came from Honduras with her husband and three children; he and one child were being held at a detention center. She described a caravan her family had joined in El Salvador that walked to the border, sleeping on the side of roads.

She said her family spent four days together at a federal detention center where the guards called them “dogs” and threatened to take her children. Carla told the group that she would have loved to go with them to the border, but immigration officials had attached an ankle bracelet to track her movement.

Carlos, 22, the other asylum-seeker, said he crossed the border with his 6-year-old sister after their father was killed by gang members in Guatemala. He said his father had survived a previous attempted killing, and the family identified the attacker, who was arrested. They spent seven months in safe houses in Guatemala before returning home, where the gang caught up with their father. 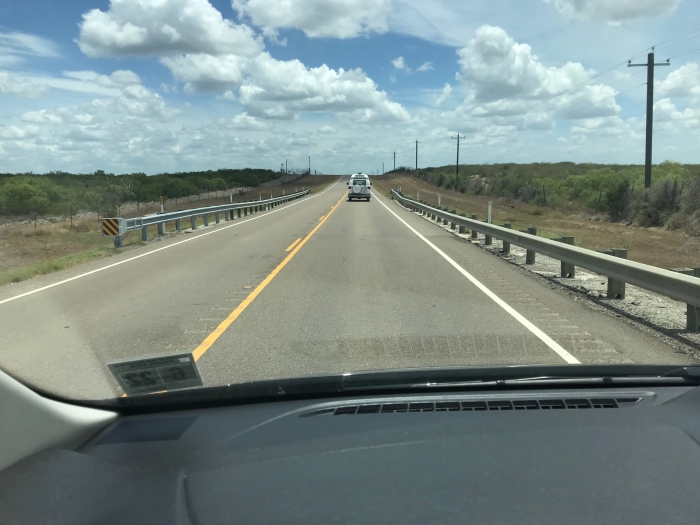 A view of the road on the last stretch of the drive to McAllen, Texas (Photo provided)

Speaking at Beahive, the caravan participants said Carlos was probably in good shape to be granted asylum because he could provide evidence that his family had a “credible fear” of their lives being in danger if they were forced to leave the U.S.

At the border, the participants said, they learned more about the process of obtaining asylum. They said they were told that those who were allowed to stay after an initial hearing were often discharged with a bus ticket but no information about what to do next.

The group wasn’t able to tour any detention centers, which was not unexpected. Outside the largest family detention center in the country, a camp in Dilley, Texas, built in 2014 and housing 1,900 families, group members were threatened with arrest after they asked if they could go inside.

But while speaking with activists who spent their days at bus stops handing out water and food to undocumented immigrants, the group members said they figured out what to do when they returned to New York. The group created a project called The Overground Railroad to raise money for supplies to provide to undocumented immigrants in Louisville, New Orleans, Mobile, Houston and other cities.

“We got to connect with people all across the country who are in this struggle,” said Bernstein. “Every place we went, they thanked us, they came out in numbers, and the numbers kept building. I have never been hugged so much in my life.”