Cooking (or food preparation, in this case, because the recipe requires no heat) has been painted as an art or a science, a perception which unfortunately has often placed it within the strict province of experts, too complicated and esoteric for common folk.

In addition to being necessary for life, food and cooking are often spoken of in hushed and worshipful tones, pointing to deeper currents, their ecstasies well beyond the realm of mere mortals, with mysteries subject to the same sort of taboos and apprehensions as, say, sex — that other elemental human activity and need — although most of us eat a couple of times a day.

But let’s bring it back to putting food on the table. Tradition, habit and routine — what we’re used to — affect our tastes more than we like to admit. This was driven home as I was checking out at Adams Fairacre Farms on Route 9 in Wappingers Falls. The gentleman behind me in line wondered what I was doing with fennel.

“It’s not even the holidays yet,” he said, and when I questioned him in return, he said that Thanksgiving and Christmas were the only times anyone cooked or ate it in his family.

Poor fellow. It’s hard to understand how such a useful and available vegetable has fallen into such neglect. A hardy vegetable-herb, fennel is indigenous to Mediterranean coastal countries and is consequently a staple of French, Italian and Greek cuisine. Although fennel’s peak seasons are fall and winter, it is available most of the year. 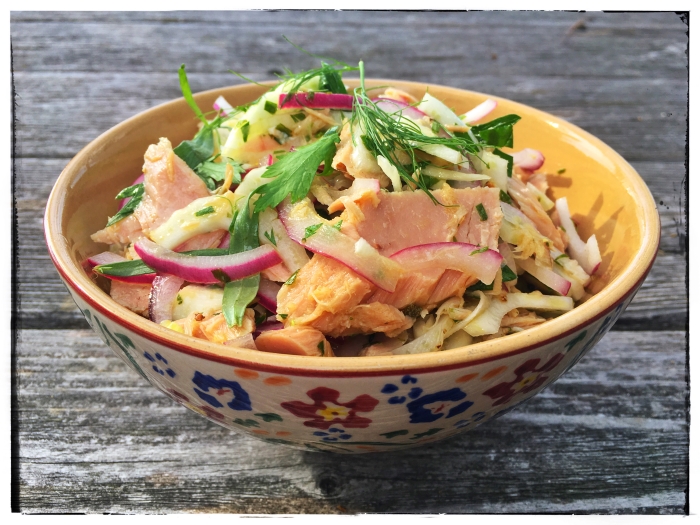 I was shopping for fennel because it is an ingredient in this Mediterranean-inflected tuna salad, a much-requested pantry staple in our house and a particular blessing to the time-strapped designated cook. This lighter-and-brighter mayonnaise-free version makes for a quick, satisfying and flexible addition to any working menu repertoire, any time of year.

Fennel, red onion and celery are sliced thin — a mandoline makes quick work of this — and the vegetables are tossed once with a quick dressing of lemon juice and olive oil, chopped tarragon, parsley and capers. They are then tossed again with chunks of quality drained, oil-packed tuna.

The simplicity and texture of this recipe benefits exponentially from a jar or two of Ortiz or Tonnino bonito or yellowtail filets (available at Adams) left in bite-sized bits rather than flaked or pummeled to death. Bumblebee or Chicken-of-the-Sea might do in a pinch, but never use the water-packed style. This is admittedly a more expensive proposition but worth every cent. Save some fennel fronds for a final garnish.

This healthier version of a universal deli staple can be used in a usual manner: served atop a bed of greens or ona sandwich layered with sliced tomato, where even a smear of mayo wouldn’t be out of place. Garnish either version with sliced avocado. It is best served at a cool room temperature but also nice to have on hand refrigerated.

As an adaptable menu staple, a couple of cups of cooked cannellini or white beans, or an equal amount of small cooked potatoes, turns the salad into a more substantial meal. Add three or four cups of cooked, shaped pasta to the same effect, plus another splash of olive oil, a squeeze of lemon and a pinch more salt and pepper to any of these variations to correct the seasoning.