Attempts to erect houses on lots that neighbors consider “unbuildable” put some Garrison residents at odds with newcomers on two rustic, private roads prone to potholes or other maintenance challenges.

Critics want the Philipstown Planning Board to stop both projects. It appears the objections came too late for one, on Upland Drive, at Philipstown’s southern end. A proposal for Lake Celeste Drive, off Old Albany Post Road, awaits further scrutiny.

Alex Campbell, a New York City resident, intends to build a 1,080-square-foot, eco-friendly “passive house” and 485-square-foot garage on a parcel on Upland Drive, with access from Cliffside Court.

Upland twists up and down hills between Old Albany Post Road and Winston Lane. Cliffside Court, also private, intersects Upland near its midpoint.

He launched the project in 2016 and subsequently sought confirmation from the Continental Village Fire Department (CVFD) that Upland and Cliffside would provide appropriate access. 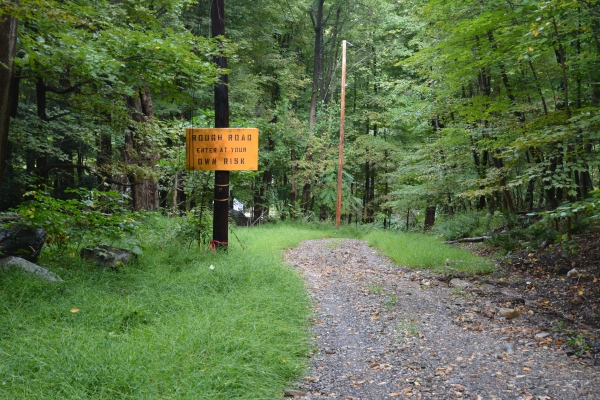 East of the intersection with Cliffside Court, a sign warns of deteriorated road conditions on Upland Drive. (Photo by L.S. Armstrong)

In August 2017, the CVFD replied that it is up to the Planning Board, not firefighters, to declare a road safe. It noted that “often the fire department responds when the roads are clearly unsafe [and] sometimes goes where there are no roads”; it pledged to answer calls on Upland or Cliffside “even if they are not safe and suitable.”

From that, Campbell told the Planning Board in April, “it can be inferred” that the roads offer sufficient access.

However, in May, the CVFD told Campbell that to aid emergency vehicles, Upland required upgrades, including widening the entrance to Cliffside Court; removing trees and brush; and broadening the mouth of the planned driveway. Having the potholes filled also wouldn’t hurt, it said.

Campbell agreed to fund the work and the Planning Board made its approval contingent upon fulfillment of that promise.

Then neighbors learned of the access approval and objected.

On Sept. 9, in an eight-page letter to the Planning Board, Abraham Wachsman, who owns three parcels on Cliffside Court, alleged that Campbell had made “misleading” statements about Upland. The road “is inherently unstable and continuously self-destructs” because of defects such as the lack of a proper roadbed and drainage, Wachsman wrote. One section has been “completely washed out and impassable” for years, he said.

Wachsman mentioned telling Campbell in 2016 that his parcel was unbuildable because of road conditions. He said that he and other neighbors urge the Planning Board to uphold what he called a long-standing policy of prohibiting development unless Upland Drive is improved.

The Planning Board put Wachsman’s letter on its Sept. 20 agenda and Upland Road residents turned out for the meeting. But the board entertained no comments, and, heeding counsel from its lawyer, Stephen Gaba, did not rescind its approval.

Gaba warned that the board could be sued for changing its mind and said the neighbors’ logical recourse would be to file their own lawsuit. He said that Wachsman presented no engineering analysis to support his claims and that a board should only overturn an approval if compelling evidence turns up. Even then, “it needs to be proof, not just allegations, that there were misrepresentations made — material misrepresentations,” he said; otherwise, a judge likely “would find it arbitrary and capricious.”

Town engineer Ron Gainer termed the parcel “landlocked,” with access only via an easement across a neighbor’s property. He referred to Lake Celeste Drive, a private lane already serving 14 homes, as “substandard and narrow.”

At a public hearing on Sept. 20, surveyor Jim Clearwater argued that Peck-Eyler “has deeded access through Lake Celeste Drive [and] the right to make improvements to the road to exercise that right.” Ben Fiering, the project contractor, suggested reducing a stone wall by 2 feet to accommodate Peck-Eyler’s plans and give emergency vehicles better access to all homes on the drive.

Neighbors wanted none of it. 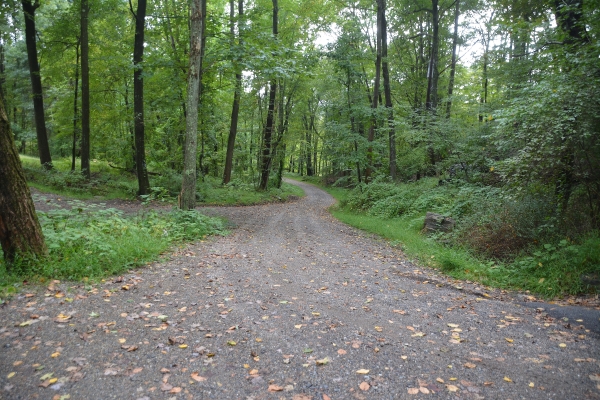 Another, Al Braverman, said that he once thought of buying the parcel now owned by Peck-Eyler but found it unbuildable because of its inaccessibility. “Why, all of a sudden, with no improvements to the road,” would anyone regard it as suitable for construction, he asked.

Bill Florence, attorney for the Lake Celeste Association, discounted the idea that the stone wall could be downsized without damaging it and said the fact the road varies from 7.5 to 19 feet wide further complicate matters. “There’s unusual unanimity against this” project, he said.

Perhaps with the allure of such havens comes attention from afar.

“There’s not much land left in Garrison to get hold of,” observed Paul Bonnar, president of the Lake Celeste Association. He added that his organization is prepared to go to court to stop Peck-Eyler’s home-building.

The Planning Board closed the hearing, but its review continues.

One thought on “New Homes on Old Lanes”