Struck tractor-trailer that overturned in front of him 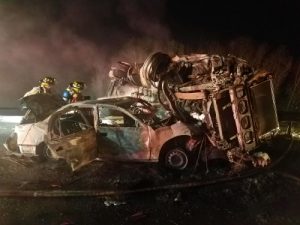 The scene of the crash (NYSP)

A 52-year-old Beacon man died early on Monday, Oct. 1, after his vehicle struck an overturned tractor-trailer on Interstate 84 near Kent.

Thomas W. Cipolla was pulled from his 1994 Toyota Camry by passersby and the truck’s driver after the 3:45 a.m. collision and taken to Putnam Hospital Center in Carmel, where he was pronounced dead. [A funeral service is scheduled for Oct. 13 in Beacon. Click here for details.]

The New York State Police reported that the tractor-trailer, driven by Sergio Khundiashvili, 36, of Brooklyn, was traveling eastbound in the left lane when it struck the median guardrail, causing the rig to overturn. Cipolla, who was also in the left lane, collided with the truck and both vehicles caught fire.

According to the state police, Khundiashvili and his passenger were taken to Danbury Hospital and treated for minor injuries. I-84 traffic was detoured to Routes 52 and 311 until about 2:45 p.m.

2 thoughts on “Beacon Man Killed in I-84 Crash”