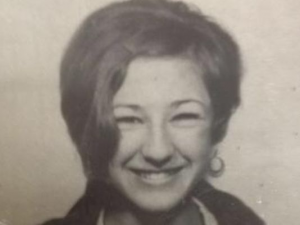 On Nov. 15, 1970, New York State Police troopers recovered the remains of Alice Lezan, 15, of Franklin Township, New Jersey, bound with rope inside a red sleeping bag at the bottom of a 60-foot drop near Camp Smith, off Bear Mountain Road, in Cortlandt.

The body was first discovered in March by a boy walking in the woods, but his parents did not believe his story. After the boy returned to the site with friends in November, his parents called the state police.

Lezan was identified using dental records. The coroner ruled her death a homicide.

The teenager was last seen on Sept. 26, 1969, near a hotel on West 48th Street in New York City. She was wearing gray-and-white pants with a purple shirt and was with a man believed to have attempted to lure her into prostitution. After Alice disappeared, prostitutes interviewed by investigators said the man stated she “went home.”

Anyone who has information about the case should contact the state police at 845-677-7300.