The Blue Devils continued their dominating football on Friday (Sept. 28), rolling to a 35-0 victory over visiting Hastings on homecoming weekend.

Senior Sam Giachinta led Haldane with 94 yards rushing and three touchdowns on 11 carries. Quarterback Dan Santos completed all five of his attempts for 78 yards and two touchdowns — an 18-yard throw to Jagger Beachak and another for 11 yards to Thomas Percacciolo. 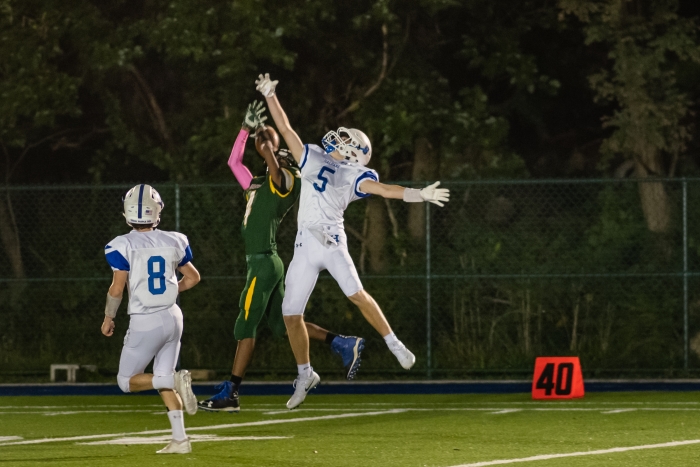 Haldane’s Matt Champlin (5) breaks up a pass to a Hastings receiver during the Blue Devils’ win. (Photo by Amy Kubik)

Haldane came out of the gate on fire, scoring all 35 points in the first quarter. Giachinta opened the scoring with a 16-yard run, and Percacciolo’s catch made it 16–0. Giachinta then ripped off touchdown runs of 9 and 7 yards before Beachak’s catch.

“Once again it starts with our offensive and defensive lines,” said Coach Ryan McConville. “We controlled the line and got our ground game going, and Dan got hot.” On defense, Giachinta had three sacks and Will Westerhuis one.

Beacon came up short, 20-14, on Saturday (Sept. 29) against the Yonkers Force in a game played at Gorton High school.

Yonkers led 14–0 at halftime before the Bulldogs (1-4) came storming back, tying the game in the fourth. But the Force won the game on a 7-yard touchdown run with less than a minute left.

“It was a great job by both teams, a hard battle from beginning to end,” said Beacon Coach Jim Phelan. The Bulldogs host Pearl River today (Oct. 5) at 6 p.m. for homecoming.