Frank Matheis hopes that visitors to the Howland Cultural Center, when viewing the photos in a show he curated that begins Saturday, Oct. 6, will hear music. The 130 images document the lives of musicians who played acoustic blues and other traditional genres, including folk, Cajun, and country.

The exhibit, American Roots Music, opens with a reception from 3 to 5 p.m. with music performed by Lowry Hamner. The show, which runs through Oct. 28, includes a tribute to the late Little Sammy Davis, a blues harmonica player who retired to the Hudson Valley after spending much of his career in Chicago.

Roots music predates electronics, synthesizers and modern recording methods. “It was the folk music that people played at home, in their own communities,” Matheis explains. “The roots of rock ‘n’ roll were acoustic blues, country and hillbilly music. Before there was rap, hip-hop, soul and funk, there was the rural down-home blues. 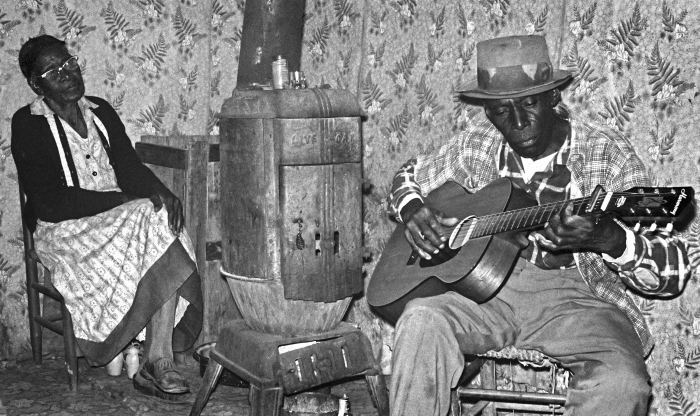 Joe Callicott and his wife, Newbit, in Mississippi (Photo by George Mitchell)

“The significance and the power of these photos shouldn’t be underestimated,” says Matheis, a longtime contributor to Living Blues magazine. “They document an oft-forgotten art form, much of which is of African-American heritage. It’s an art form predominantly made by poor people who were culturally powerless, yet it was significant for world culture. It emerged long ago as an international form.”

Matheis initially hoped to mount the exhibit using photos from his personal collection but realized they didn’t reflect the breadth of the subject. So he put the word out. Many of the thousands of images that came back have never been published. “I requested black-and-white images, and we stayed away from shots of the musicians playing electric instruments,” he explains.

“All of these photographers got close to the lives of these musicians; they had intimate access,” he adds. “Many shots were taken in the South, in the musicians’ homes, the places where they lived. You can see people on their porches, in their community, with their neighbors. In some cases, the photographers made field recordings as a way of documenting everything.”