Haldane won two of three matches last week, improving to 10-2 overall after wins over Poughkeepsie and Pawling. The loss was at Ossining on Oct. 5, in three sets. 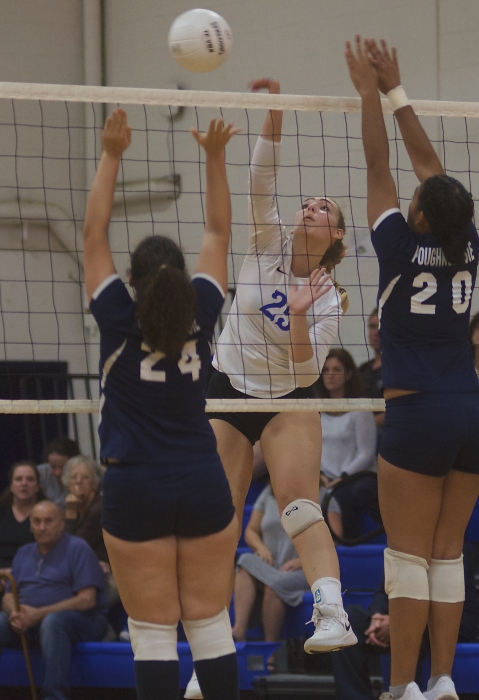 On Tuesday (Oct. 9) at home, the Blue Devils were too much for the visiting Pioneers, winning 25-5, 25-18, 25-19. Willa Fitzgerald led Haldane with nine kills and four aces and Olivia Monteleone added four aces and seven digs. Morgan Etta contributed four aces and five kills, and Melissa Rodino had five aces, four kills and 13 assists.

“I was happy with the way we came out swinging,” said Coach Kelsey Flaherty. “We didn’t play down to the opponent. Everyone was involved, so they all had a part in the win.”

On Friday at Ossining, the Blue Devils did not play well.

“That was a bad loss for us,” Flaherty said. “We had a lot of unforced errors and mistakes.”

“This is a match I look forward to because the teams are very equal,” Flaherty said. “Our defense helped us win — we reacted quickly — and got our offense set up well.”

The Blue Devils were scheduled to visit Westlake today (Friday) at 4:30 p.m. and travel to North Salem on Tuesday. The team will honor its seniors when Pawling comes to town on Thursday.