Whose job and at whose cost?

The report by Jennifer Zwarich, who chairs the village Tree Advisory Committee, during the Oct. 9 meeting of the Cold Spring Village Board was routine, but her later remarks during public comment prompted a lively discussion over who is responsible for sprucing up Main Street.

Zwarich argued that the village should set aside funds for Main Street beautification. “Even a few thousand dollars would make a big difference,” she said, stressing that her committee’s budget pays only for tree maintenance and safety issues such as removal of dead limbs.

Mayor Dave Merandy took exception to the idea of using village money to beautify only Main Street, charging that some businesses owners do not maintain the area in front of their shops. 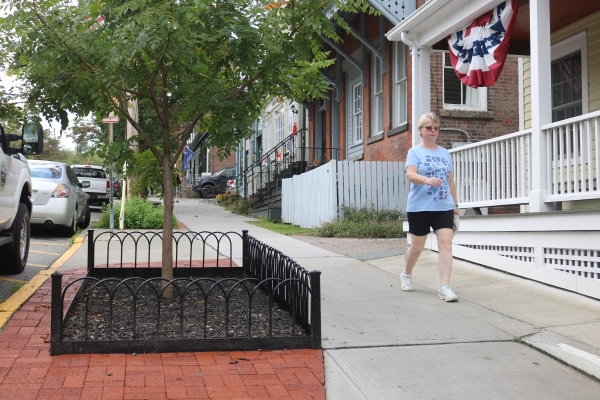 Mayor Dave Merandy installed these brick pavers, but the tree bed in the background remains weed-infested. (Photo by M. Turton)

“I’m willing to invest but what about other people on Main Street?” he asked. Merandy installed brick pavers on one section of Main earlier this year and purchased a set of $700 tree guards. Many of the tree pits are empty except for weeds, especially since volunteers who planted flowers stopped doing so a few years ago, Zwarich said.

Trustees Steve Voloto and Lynn Miller both said that some business owners mistakenly believe the village reaps a windfall in revenue from sales tax. “I have that conversation every week,” said Miller, who co-owns Go-Go Pops. In fact, Putnam is one of a handful of counties in the state that does not share sales tax with its municipalities.

“We’ve devoted a lot of time, but I’m played out,” Merandy said. “Other people have to step up.”

Part of the challenge of beautification is that public spaces are “owned by none of us and by all of us,” Zwarich said. She noted that tree guards can be sponsored for $650 to $1,200, and donations can help install permeable brick pavers that “add charm and help trees access needed water;” and that residents and businesses can take charge of individual tree pits. See coldspringtree.weebly.com. The page also has information about volunteering.

Zwarich reported that a $3,425 contract for pruning and removing trees has been awarded, with work to begin this month.

Zwarich, noting she was speaking as a resident, said that the village should not rent public parks for private events if they prevent access to the public. She suggested that the village limit the number of weekends that parks such as Dockside are rented.

Larry Burke, the officer-in-charge of the Cold Spring Police Department, was not at the meeting due to a helicopter rescue conducted earlier in the day at Breakneck Ridge. His written report said the CSPD answered 85 calls in September and made two arrests, one under the Mental Hygiene Law (where police determine a person is a danger) and one for assault. Officers issued 106 parking and 20 traffic tickets, including six for speeding, two for speeding in a school zone and two for crosswalk violations.

Superintendent of Water and Wastewater Greg Phillips wryly backpedaled on a comment he made last spring when he warned of the need to conserve water, given predictions of a dry summer. At Tuesday’s meeting he reported that during July, August and September, Cold Spring received more than 21 inches of rain. Phillips, who has managed the village water and wastewater systems since 1997, recently met with village officials to discuss his retirement, scheduled for next year, and the transition to a new manager.

Recreation Commission Chairperson Ruth Anne Cullinan-Barr addressed the board regarding a pending application for a food-and-wine festival in Mayor’s Park in August, an event that has taken place in eastern Putnam County. Board members agreed that outside groups can use village parks but that residents should be given priority.

The Historic District Review Board is monitoring the relocation of the Timme Arch, an architectural feature removed from Butterfield Hospital before it was razed. Preservation of the arch was a condition of the board’s approval of the demolition. The arch is being installed in the senior center under construction.