After suing both Philipstown and Nelsonville for rejecting its plans for new cell towers, Highland Towers recently offered a compromise — or two.

The cell tower developer intended to install a 180-foot tower on a hillside along Vineyard Road, near the intersection of Routes 9 and 301, in Philipstown, and a 110-foot tower on a wooded ridge on Rockledge Road, above the Cold Spring Cemetery, in Nelsonville. Both municipalities refused permission and Homeland Towers and its partner, Verizon Wireless, filed lawsuits. AT&T likewise sued Nelsonville, as a potential user of the Rockledge tower.

Now, after negotiations with Philipstown, which the court encouraged, Homeland has proposed to move the Vineland tower to a less intrusive spot on the same property and to relocate the Nelsonville tower to the Philipstown Highway Department on Fishkill Road, at the edge of Nelsonville.

Philipstown Supervisor Richard Shea discussed the proposals at Town Board meetings on Oct. 4 and Wednesday (Oct. 10). 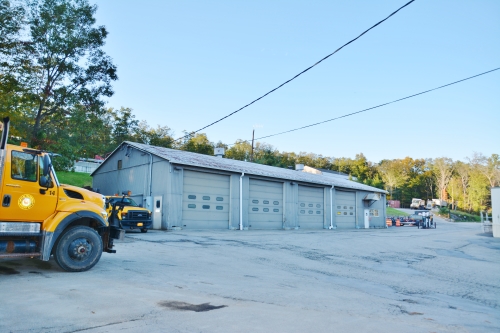 After a round of negotiations on Oct. 9, Shea said that “it seems like we’re close to settling” the Vineyard tower case, rather than engaging in “a long, protracted legal battle — which we’re not afraid of. But if we can reach a settlement, it will be in everybody’s best interest.”

The federal court set a deadline of Oct. 31 for presenting an agreement, Shea said. He explained that discussions in the Vineyard case led to the offer to locate the proposed Nelsonville tower on the town Highway Department property.

The Highway Department complex contains a garage, office trailer, shed, vehicles and gear. Moving the Rockledge tower “would eliminate the issue for Nelsonville” while providing Philipstown with rental income (the amount to be determined) and a structure for mounting Highway Department, law enforcement and emergency services communications equipment, Shea said. “The [county] sheriff really, really wants a communications antenna here in town,” he noted.

He also said the change would preserve the scenery in and around the cemetery, especially near the grave of Julia Butterfield, who endowed a now-demolished hospital in Cold Spring. “We’ve already knocked down the hospital, so let’s not desecrate her tomb,” Shea said, on Oct. 4. “If it comes down to a choice of having it at the cemetery or at our highway garage, we should really consider putting it up there” at the garage.

“It’s the lesser of the evils,” agreed Councilor John Van Tassel, when the board again discussed the matter six days later.

Nelsonville Mayor Bill O’Neill said Monday (Oct. 8) that the village played no role in the negotiations. “We have not been involved in any settlement discussions” and “are in a holding pattern” after submitting stacks of documents to the court in the Rockledge litigation, he said.

The idea of building a tower at the Highway Department came up several times during Nelsonville’s 10-month review of Homeland’s application. But the firm maintained that the Fishkill Road location would not fix a gap in wireless coverage. Even a tall tower there “doesn’t work,” said Robert Gaudioso, an attorney for Homeland, in November. “It’s simply in the wrong spot.”

Asked if the company had changed its mind, Gaudioso said on Sunday (Oct. 7) that, given the ongoing litigation, he could not comment.

While moving the Philipstown tower to a different spot on same Vineyard property would shield it from neighbors who objected to it, the structure would still be visible from Route 9 and a trailer-home community there, Shea said. Homeland plans a 190-foot tower (10 feet taller than before) but that “we’re trying to get them to take it down a little bit,” he said.

Shea described Homeland’s latest Vineyard offer as “a drastic change” from anything previously presented. (In August, he reported that Homeland had sent terms that the Town Board declined to accept.) But he also said that neighbors who opposed the location of the tower “will be the ultimate arbiters of what happens.

“Nobody likes to see towers, but they are a necessary piece of the infrastructure” for devices like personal phones, he said. “Everybody has one, so we’re all guilty.”

With Upland Drive in Continental Village deteriorating and some residents urging the town to act, Shea said on Oct. 4 that the board must “start using some sort of leverage” to compel maintenance of private dirt roads.

Michael Natiello, who lives on Upland, said the road has a homeowners’ pact covering upkeep, but that some neighbors refuse to participate.

The Philipstown Highway Department does not maintain private roads, but Shea said the town could guide residents in making improvements if they petitioned for help.

He described Upland as “horrendous,” requiring drainage, paving and sight-line adjustments. But before the town can step in, he said, at least 51 percent of the property owners must sign a petition seeking intervention.

The narrow lane, gouged by large and deep potholes and strewn with rocks and stones, winds steeply between Old Albany Post Road on the east and Winston Lane on the west, at the southern end of Philipstown. 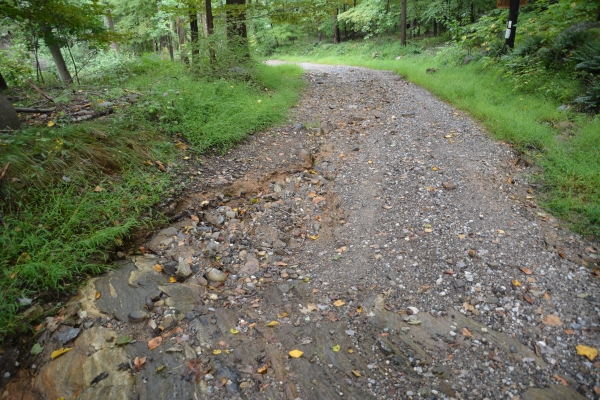 Some Upland residents became alarmed this summer when they realized a property owner intended to construct a house on a lot they regard as unbuildable and inaccessible. In June, the Planning Board approved access to the property contingent upon completion of changes recommended by the Continental Village Fire Department.

But Natiello told the Town Board that neighbors fear the house construction “is setting a precedent for future development” that will compound problems.

Shea said the Town Board should consider an Upland moratorium, so that “if anybody wants a building permit, the answer is ‘no’ … Nobody gets any permits for anything,” until the road problems are addressed. Furthermore, he suggested zoning changes, so “if you’re going to build on this road, you’re going to need more than the [present] postage-stamp lots that historically were summer camps” meant for limited, recreational stays.

The New York City Department of Environmental Protection, which maintains the Catskill aqueduct that supplies water to the city and some upstate areas, including Continental Village, intends to close the system temporarily for repairs at the end of October, Shea said.

He said the work could take five years, requiring periodic shutdowns of about 10 weeks each. Shea said Philipstown plans to contract with Cortlandt for water for Continental Village during the shutdowns.

Councilor Michael Leonard reported that the town’s Conservation Board is monitoring the project and “making sure it has the least impact as possible.”