When Hollywood Came to Beacon

No movies were shown at the Roosevelt Theater in Beacon during the summer of 1947. That year the Original VanWyck Players, a summer stock company of actors, pre-empted the cinema offerings with Broadway hits featuring Hollywood stars in the leading roles. 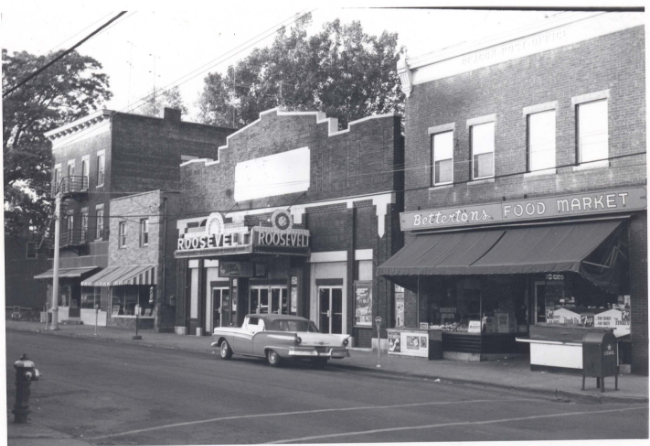 The Roosevelt Theater in the 1950s (BHS)

The summer stock season at the Roosevelt lasted 10 weeks, with each week featuring a new production and a new star. On June 23, 1947, Gloria Swanson opened the season in Goose for the Gander. The following weeks saw Conrad Nagel in The Petrified Forest and Miriam Hopkins in There’s Always Juliet. Other stars who visited Beacon were John Carradine, Zasu Pitts and Edward Everett Horton. 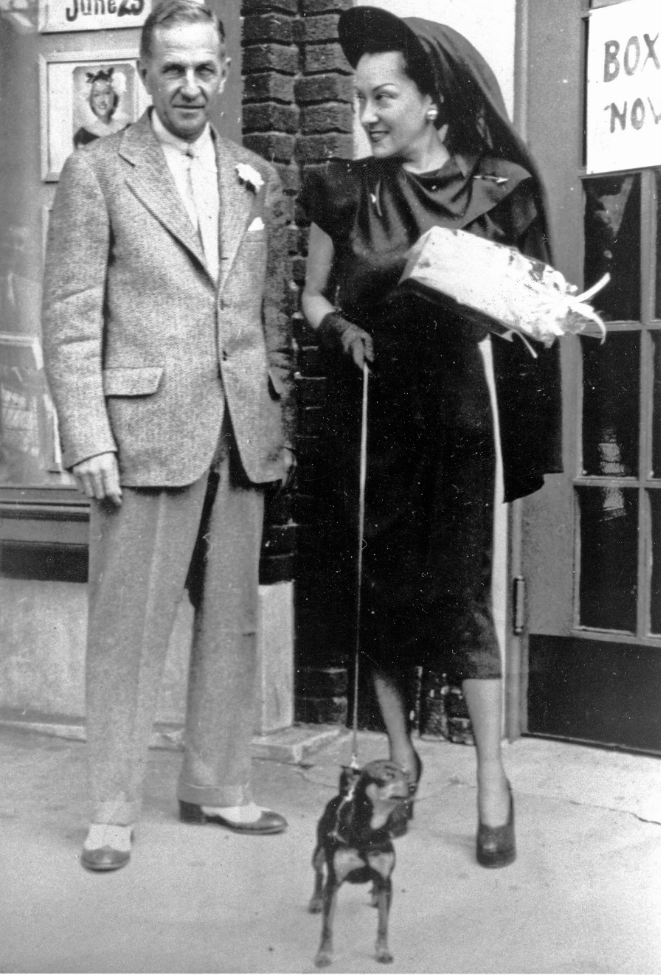 Beacon Mayor J. Lewis Bolton with Gloria Swanson in front of the Roosevelt Theater in 1947 (BHS)

Bringing Hollywood to Beacon was a gamble for Charles Butler, the manager and director of the VanWyck Players. Would the community turn out for these shows and pay ticket prices of up to $2 [$24 in 2018 dollars]? Apparently so, for the Roosevelt was filled for every performance.

Gloria Swanson proved most popular. On June 23, the Beacon News reported: “Miss Swanson was strictly an eye-catcher as she walked to the theater from the Dutchess Hotel where she was registered. Hundreds of pedestrians and motorists paused to gaze at her along the way.”

Alas, summer stock in Beacon only lasted that one summer. Cecil Gage of Fishkill wooed the VanWyck Players by building the Cecilwood Theater off Route 52 for the 1948 season. The Roosevelt Theater slipped back from high culture to “B” movies — horror films, budget westerns and sci-fi thrillers — which is how we older folks best remember it.

News coverage of the death of John McCain noted the Arizona senator’s near-death experience during the Vietnam War in 1967 as an A-4 Skyhawk pilot stationed aboard an aircraft carrier. An accidental release of a rocket by a jet on the takeoff deck started a fire and explosions that killed 134 sailors. McCain barely escaped his burning plane.

In his memoir, Faith of My Fathers, McCain recalled that “after a short while, I went to sick bay to have my burns and shrapnel wounds treated. There I found a horrible scene of many men burned beyond saving, grasping at the last moment of life. Someone called my name, a kid, anonymous to me because the fire had burned off all his identifying features. He asked me if a pilot in our squadron was OK. I replied that he was. The young man said, ‘Thank God,’ and died. I left the sick bay unable to keep my composure. Men sacrificed their lives for one another and for their ship. Many of them were 18 and 19 years old.” 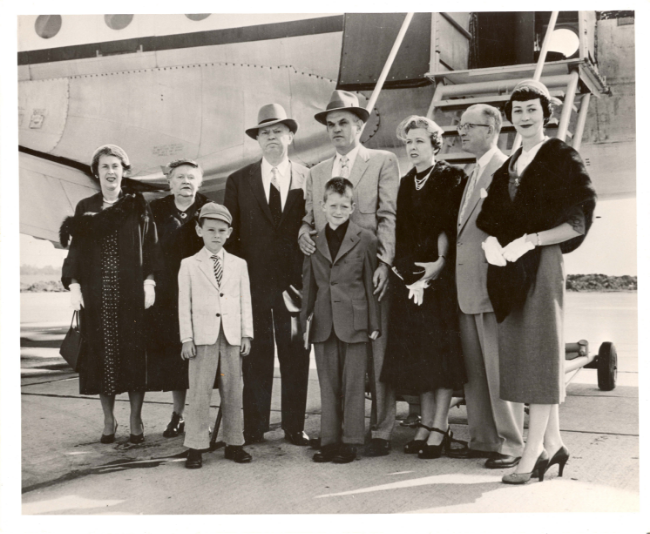 The Forrestal family and Beacon officials prepare to board a Navy plane at Stewart airport in 1955 to fly to Virginia for the commissioning of the USS Forrestal. (BHS)

The Forrestal was the first of its class of supercarriers, the biggest warship ever built when it was christened in Newport News, Virginia, in December 1954, five years after James’ death. The Navy invited Mrs. James Forrestal and her two sons, as well as a number of Beacon residents. They included James’ brother, Henry L.A. Forrestal, and his family, Mayor Henry Kennelly, former Mayor J. Lewis Bolton and the new principal of James V. Forrestal Elementary School, Franklin Den Besten. All were flown in a Navy plane to Virginia. When the carrier was commissioned in October 1955, the Henry Forrestal family and Mayor Kennelly again flew to Virginia aboard a Navy plane.

The USS Forrestal was decommissioned in 1993. The ship’s sailor heroes that McCain wrote about binds the ties between the Forrestal name and our city even closer.

In 1950, when the Spring Street school building was deemed to be no longer safe for the children of Beacon’s east end, the Board of Education purchased a tract of 12 acres off Liberty Street for a new school. By a vote of 1,746 to 90, voters approved spending $994,000 [$10 million] to build it.

It was a newspaperman, Morg Hoyt, writing in the Beacon News, who broached the idea of naming the school after James Forrestal. Some 40 years earlier Hoyt had hired a young Forrestal out of high school as a cub reporter for The Matteawan Journal. 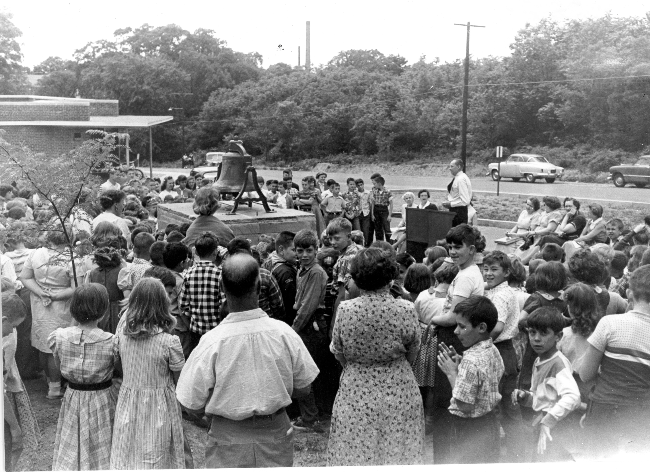 The teen distinguished himself with his writing ability and his drive to root out a good story. Hoyt reminded readers that Forrestal had graduated at age 16 from Matteawan High School (later renamed Spring Street School) — the same school about to be replaced. By coincidence the Liberty Street site also once had been part of the farmland of Matthias Toohey, Forrestal’s maternal grandfather.

The James V. Forrestal School opened in September 1953 and was dedicated in June 1954. President Dwight Eisenhower sent his congratulations. Soon after, the bell from Spring Street was put in place in front of the new school and today its clear tones ring for each retiring teacher and for each student completing his or her sixth year of study in the school.

The Coal Silos on Tioronda

The four massive cement silos on Tioronda Avenue seem curiously misplaced — so unsightly near the shops on Main Street, so aesthetically opposite of the lofty spire on the abutting old First Methodist Church, and so disconnected to Richard Morris Hunt’s architectural gem, the old Howland Library, across the street.

Yet oddly enough, after almost 90 years of dominating the skyline of Beacon’s east end, the hulking silos warrant attention in their own right as important relics of our city’s industrial and railroad past. 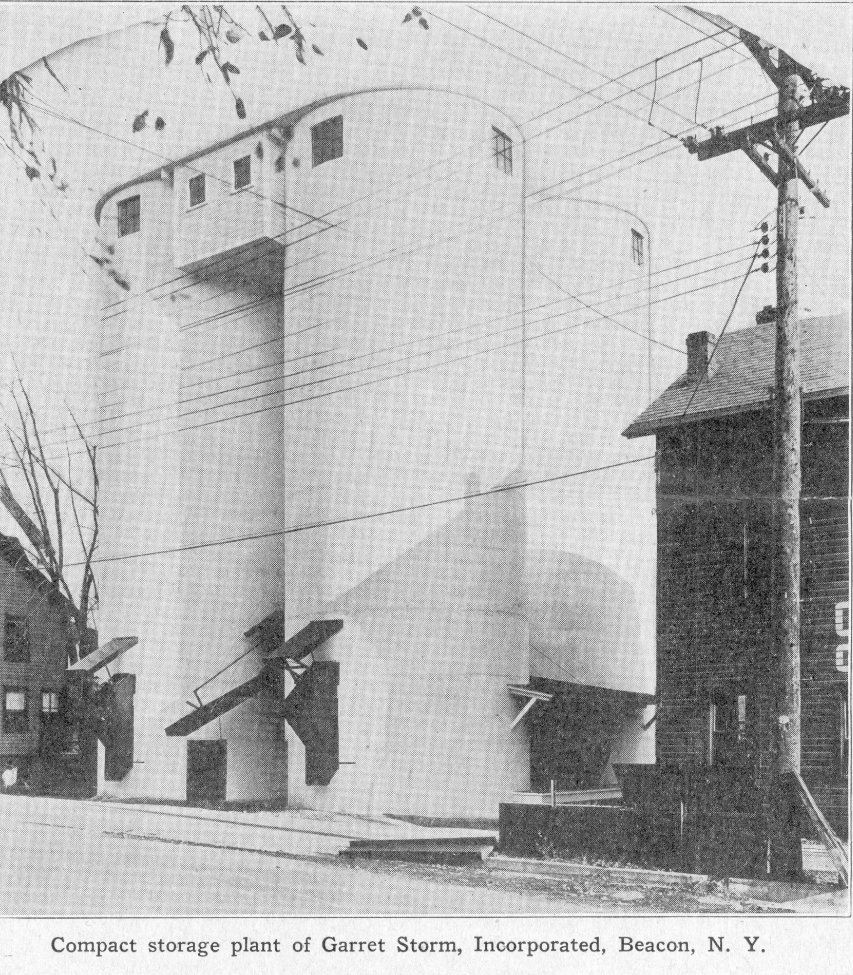 The silos were constructed in the fall of 1931 for the Garrett Storm coal business as a unique solution for the company’s limited ground storage space for its supply of anthracite coal, the heating fuel most commonly used at the time. Each silo stands 55 feet high, with an 18-foot diameter, and held 320 gross tons of anthracite.

The silos had a clever mechanism for receiving and dispensing: from a nearby siding a railroad car delivered the coal into a concrete hopper. A gravity chute fed the coal into an electric elevator, which lifted the anthracite to the top of each silo at the rate of 40 tons per hour. At the top, separate valves on the conveyor discharged the coal — whether “stove” (the largest), “chestnut” (midsize) or “pea” (for pot stoves) — into the proper bin. Three gates on the street side allowed access by delivery trucks.

The silos provided “air-rights” storage space for the coal yard. That concept, combined with the advanced technology of the delivery system, proved critical to the economic success of a small-scale yard like Storm’s. Today, the silos are being eyed as structures that could be converted into homes.