As a plein air painter, Barbara Masterson has spent years outdoors, capturing the landscapes of the Hudson Valley, particularly the pastoral areas near her home in Marlboro, in Ulster County.

Three years ago, she set up her canvas on a neighbor’s farm, when to her surprise, several men whom she perceived to be migrant workers came into view. Intrigued, she incorporated them into her painting as “sunlit shapes in the landscape.”

As she returned to that spot and others nearby, “these shapes became much more than figures,” she recalls. “Their forms became individual people with sunburned faces, discrete personalities, and with distinct life stories. My paintings began to change and to grow.” 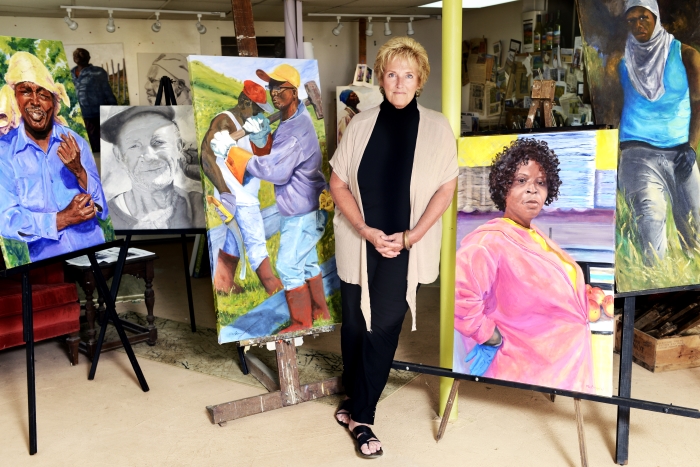 When it became too cold to continue painting outdoors, Masterson found she missed including the workers in her paintings. She began using photographs she had taken of the workers (with their OK) as winter substitutes. Slowly the workers overtook the landscapes.

“From that point, I’ve gone from landscapes to people in landscapes to figures and, finally, to portraits,” she says. “Now I mostly do portraits. So many people don’t see these people. They do jobs that most Americans won’t do. Yet each year from April to November, they work in our communities almost unnoticed. They remain unknown despite their presence here for many months each year. 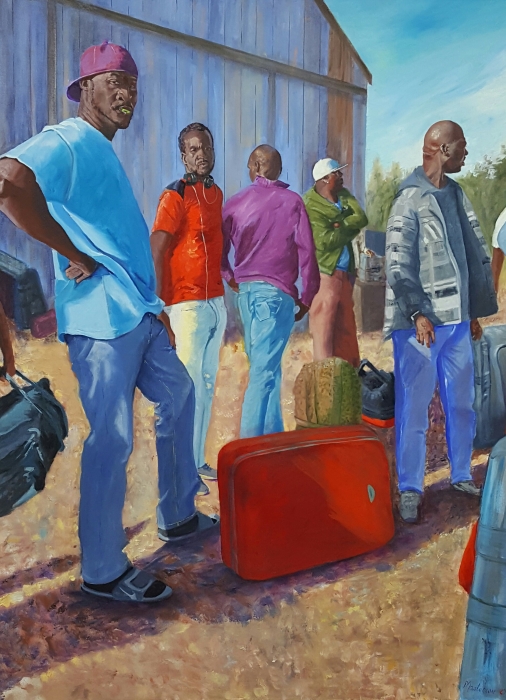 “Can you see them?” she asks. “What is life like for them? What role do we play in keeping them unseen? Nobody knows where their food comes from or who picked it.”

Masterson’s portraits are the subject of a show, People of the Fields, at the Lofts at Beacon that continues through Nov. 3. Masterson will talk about her work at 2 p.m. on Sunday, Oct. 21.

Masterson says when she shows her paintings, people often ask where she went to find the subjects. “I answer, ‘Right here, in Marlboro,’ ” she says.

Most of the workers come from Jamaica, Haiti, the Dominican Republic or Mexico, Masterson says. She says the heightened threat of deportation of undocumented workers under the Trump administration has added another dimension to her work. “I love and respect these workers,” she says. “They toil in the Hudson Valley, earning modest wages. We need to embrace them, welcome them. Even though it’s only been three years since I started, so much has changed. Now some won’t allow me to paint them; they’re afraid.”

Masterson, who lives on a farm, has painted since childhood. She earned a master’s degree in painting from SUNY New Paltz and worked as an art teacher at Newburgh Free Academy for 25 years before her retirement in 2014. (She notes that while hanging her latest show at The Lofts at Beacon, she went to lunch at the Melzingah Tap House and was pleased to see a mural there by one of her former students, Joe Pimentel.)

Masterson works in gouache for her smaller paintings and oil on canvas for larger ones.

“Outdoors I use big chunky oil bars, and in the studio I use brushes,” she explains. “The gouache allows me to work faster and looser. I do take a little artistic license, sometimes changing colors to where I’d like your eyes to go.”

“Two years ago I had a solo show at the Falcon, in Marlboro,” she recalls. “I went to the workers’ barracks and was able to persuade three of them to come with me. Tony Falco, the Falcon’s owner, welcomed them with a free Sunday brunch, and they came, in their work clothes, and we walked around, and people were shaking their hands. There was a woman there who had bought a couple of the paintings in which one of the men was the subject. She happened to turn up, and they met. I cried all the way home; it was so moving.”