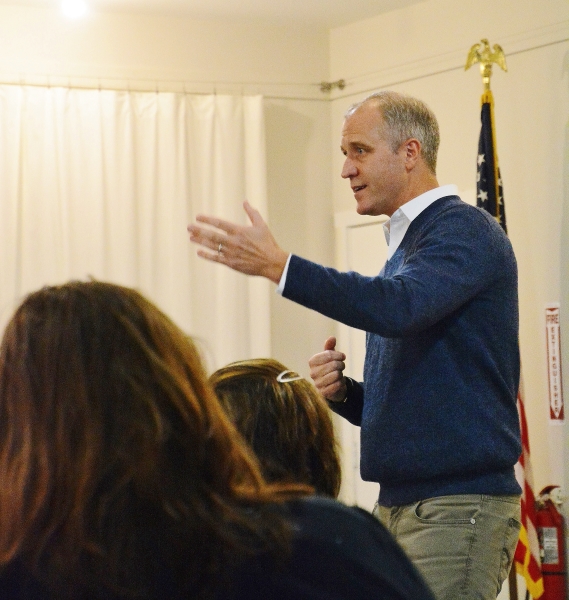 With congressional campaigns in full swing, Rep. Sean Patrick Maloney stopped close to home on Sunday (Oct. 14) to explain his failed run for state attorney general, defend bipartisanship, and express determination to see Democrats become the majority in the House of Representatives.

Maloney, who lives just outside Cold Spring, is seeking his fourth term representing New York’s 18th District, which includes the Highlands. He spoke at the Old VFW Hall to about 40 people at a gathering announced two days earlier.

After entering the race relatively late, Maloney finished third of four candidates on Sept. 13 in the Democratic primary for state attorney general. He ran for that office while remaining a House candidate and on Sunday termed the outcome “bittersweet.” He added: “You want to know why I ran for attorney general? Because I can do more” and not feel like “I’m nibbling around the edges, figuring out what I can do” in Congress as a member of the minority party.

Now, he said, he’s working to win his own race and get enough Democrats elected for the party to control the House and pass legislation on climate change, investigate Russian meddling in U.S. elections, oppose President Trump and reverse the GOP’s deregulation efforts.

Although he has called his Republican opponent, James O’Donnell, an Orange County legislator, one of the weakest challengers he’s faced, he said “we’re not taking it [the race] for granted.” He said O’Donnell had a good biography but little name recognition. (Maloney also has raised more money, about $2.5 million versus O’Donnell’s $327,000.) Nonetheless, “I’m watching like a hawk,” he said. He observed that despite winning in a district where a majority of voters went for Trump, “I have never won Putnam County. That’s a goal.”

As for other House races, he said of the Democrats, “if we don’t take the House, shame on us.”

Maloney said that a Democratic-majority House could probably enact gun control laws but not necessarily everything some constituents advocate, at least not immediately.

Maloney, who has two daughters in high school, said a school gun attack “is my worst nightmare, every parent’s worst nightmare.” He proposed that Congress take “common-sense measures,” such as banning assault rifles. “You can do that under the Second Amendment,” he said. “This is not a constitutional issue.”

After Maloney encouraged Democrats to “reach across the aisle” on gun control, an audience member objected that enlisting Republicans would mean “watering down” any legislation. Maloney countered that “it’s not watering down” but “how to function” in a divided society. Engaging those with different views “doesn’t mean changing your values,” he said. And “standing up and yelling at the other side doesn’t work.”

Maloney said that 30 bills he introduced became law with some Republican support. Bipartisanship “is the kind of politics I’ve had to practice” but “is not popular right now in the Democratic Party,” he observed. He criticized Democrats for ignoring many parts of the country, leading fellow citizens to assume that it’s impossible to approach, talk to or trust Democrats.

“The blue team has to build a bigger coalition [and] try to stop trying to control everything” and listen and broaden its base, he said. “That’s the space I live in.”