Langley, a Garrison resident, was elected a year ago, defeating Don Smith, who had held the office since 2002. About 35 residents attended the meeting to hear the officers respond to written questions.

The abuse of opioids and other narcotics is a continuing challenge for law enforcement, said Capt. Jon Jennings, who heads the sheriff’s criminal investigations bureau. He said that while the department traditionally regarded overdoses as emergency service calls or unattended deaths, it now also investigates them as crime scenes. “Our intention is to go after the person who supplied it,” he said. “It’s a complex problem with no great answers.” 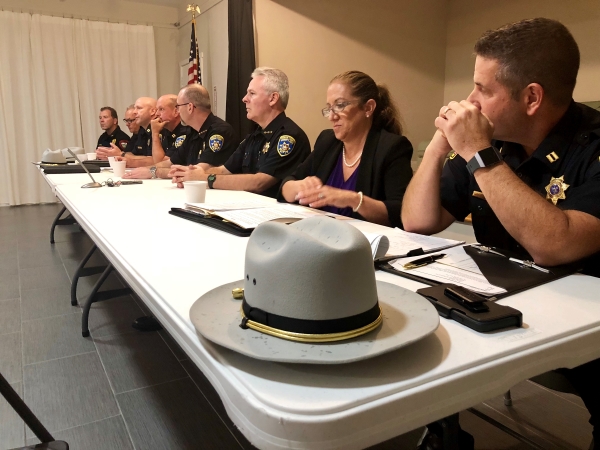 Capt. Kevin Cheverko, who oversees the county jail, noted that “80 percent of the jail population is there on drug charges or drug-related charges,” such as stealing. Inmates often suffer from mental illness or homelessness, he said, and “jails become the safety net. It’s a huge problem and we have to be creative.”

The department recently received a $156,000 state grant for anti-addiction programs, including efforts to help inmates continue treatment once released, he noted.

Capt. Harry Tompkins, the patrol supervisor, said the department’s six dogs are “the stars of the show, in most cases.” The K-9 officers can detect black powder, munitions, narcotics and accelerants used in arsons, as well as trail suspects.

And the dogs specialize, Tompkins said. For example, the department’s bloodhound concentrates on tracking, while two German shepherds do tracking and drug detection. Whatever their role, each has “a great following,” he said.

Capt. James Babcock, who handles operations, said the department recently acquired a powerful drone, whose functions “are endless. It’s going to be an awesome asset for us” to find lost hikers, locate a property, reconstruct an accident or crime, and for surveillance before serving a warrant. The drone will also be used to assist local police and firefighters, he said. 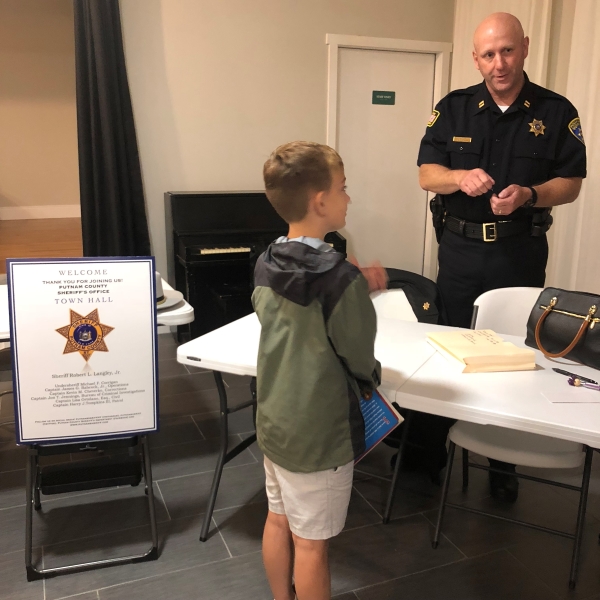 With a drone in hand, the department has another hot item on its wish list, Tompkins said. “Most patrol cars don’t come equipped with chain saws,” he noted, but they’re invaluable for some rescues and other incidents, he said.

Further, the department wants to create an emergency services unit, conduct training with fire departments and other agencies, and generally become more versatile in crises. “It will just bring a better service to the people of Putnam County,” he said.

Tompkins, Undersheriff Michael Corrigan and Jennings, a former FBI agent, said the Sheriff’s Department has excellent relationships with state and federal law enforcement agencies. Corrigan observed that “crime knows no borders. We can pick up the phone and call anybody any time in any country to help us.” He added: “It’s a two-way street.”

The Sheriff’s Department personnel and Officer-in-Charge Larry Burke of the Cold Spring Police Department, who also responded to questions, emphasized the importance of building trust with the community. Their strategies include having school resource officers (SROs), who are sheriff’s deputies on duty at public schools, become friendly and familiar to students, Langley said.

“You can’t underestimate the relationship cultivated” with SROs, Corrigan added. “These relationships become so trusting that there are many times” when a student will confide information about another child who has suffered physical abuse, or considered suicide or engaged in harmful behavior. The SRO can intervene, while shielding the student who spoke up, Corrigan said. “We don’t want anyone to be sorry they came to us.”

At the Cold Spring Police Department, part of building trust means “it’s back to community policing for my guys,” Burke said. “It’s more uniforms out there, and more communications,” especially during tourism season. “It’s more for the community, more for the visitors, more for the residents.”

Praising the Sheriff’s Department as a terrific partner, Burke mentioned their common motivation — they’re all cops. “We do this because we love it,” he said. “This is what we give to you guys [the public]. It’s not a job. It’s what we were born to do.”