Band with unique sound to perform at Chapel

The band scheduled to perform Friday, Nov. 2, at the Chapel Restoration in Cold Spring is called Gangstagrass, which sounds odd until you hear what it plays.

Hip-hop. And bluegrass. At the same time.

Gangstagrass, which leaves in January to tour the U.K., includes two MCs who drop beats that interact with a dobro, banjo and guitar. The group was formed in 2006 by a Brooklyn producer who goes by the stage name Rench. He describes his youth as “breakdancing on cardboard to RUN-DMC during recess, then going home and listening to my parents’ favorite country artists, Johnny Cash and Willie Nelson, on the stereo.” 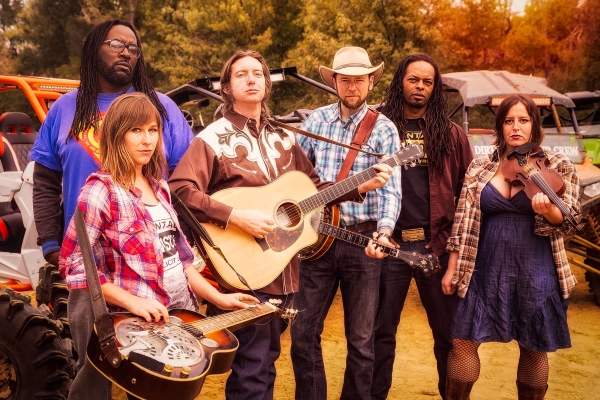 Later, after Rench began producing hip-hop artists, he combined their tracks with samples from bluegrass, blues and electronic beats. “There are a lot more people out there with Jay-Z and Johnny Cash on their iPod playlists than you think,” he says.

Gangstagrass released its first album in 2010 with T.O.N.E.-Z, Lightning on the Strings, Thunder on the Mic. The band began to gain a national following when producers of the Elmore Leonard-inspired crime drama Justified used one of the band’s singles, Long Hard Times to Come, as the opening theme. That led to an Emmy nomination for Rench and T.O.N.E.-Z for best original title song.

Gangstagrass’ next album, Rappalachia, released in 2012, features rappers such as Kool Keith, Dead Prez, R-SON the Voice of Reason and Dolio the Sleuth. And its third, American Music, in 2015, reached No. 5 on the Billboard bluegrass charts.

The band’s current tour features a lot of new material, Rench says. He hopes on the next album to have tracks each recorded live at a different venue. “It’s bittersweet when we play to an audience with such a connection,” he says. “It makes me wish we could have shared that with everyone.”

Gangstagrass will appear as part of the Chapel Restoration’s ongoing Roadhouse series, with food by Pappi’s Mediterranean and beer by Industrial Arts available for sale. The Chapel is located at 45 Market St., in Cold Spring. Tickets are $25 at eventbrite.com. Paid parking is usually available in the adjacent Metro-North lot.