A ‘big ask’ pays off

When The Current chronicled Leesa Thompson’s search for a kidney last summer, the 61-year-old speech pathologist conceded her plea for an altruistic donor was “a big ask.”

But the “ask” paid off. On Oct. 10, Thompson, who lives in Cortlandt Manor and has been an active member of the Beacon Sloop Club for more than 35 years, received a new kidney at NewYork-Presbyterian/Weill Cornell Medical Center in Manhattan.

She was fortunate. More than 120,000 people in the U.S. are waiting for a transplant, according to the National Kidney Foundation.

Thompson set up a website and Facebook page to find a donor, a search also supported by renewal.org, an organization that assists people suffering from kidney disease. But it was a mass email sent by her significant other, Jeff Fruithandler, that brought results.

When Ed Holowinko read Fruithandler’s plea at his home in Norwalk, Connecticut, he thought, I can do that for her. He had never met Thompson. 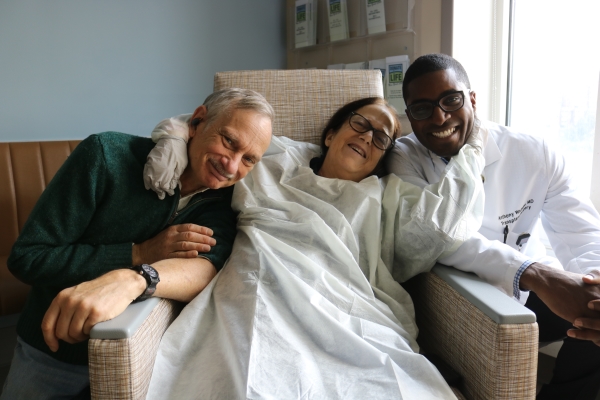 As it worked out, Thompson could not receive Holowinko’s kidney because their blood types did not match. Instead, he agreed to what is known as a “paired exchange” in which two recipients, both with willing but incompatible donors, “swap” donated kidneys.

That was another stroke of good fortune, as only about 500 of these exchanges can be arranged each year.

On Oct. 9, a kidney donated by a woman in California which was compatible with Thompson was shipped overnight to Weill Cornell. At the same time, one of Holowinko’s kidneys was removed and shipped to Boston, where it was transplanted into a male patient who matched with him. Thompson and Holowinko may never know the identity of the California donor or the Boston recipient.

Thompson learned in February that her kidney function had deteriorated so badly that she had two choices: dialysis or a transplant. Things moved quickly after she and Holowinko were listed on the paired exchange in August. She received the call on Sept. 10 from Weill Cornell that a matched donor had come forward and that her surgery would take place in October.

“I was ecstatic that I wouldn’t need dialysis,” Thompson recalled. “Ed saved my life.” Asked how she could thank him, she said, “We’re going on a cruise to Montreal and Boston” as soon as she is cleared to travel. “I have a new family,” she said.” I’m very happy, very grateful.”

Holowinko said that he didn’t hesitate to donate because, at age 64, he has a healthy lifestyle and follows a vegan diet. An avid cyclist, he has resumed workouts on a stationary bicycle. “I feel like nothing happened,” he said. “What’s the big deal?” The postoperative recovery took about five days, he said.

His decision to donate a kidney wasn’t as easy for his wife. “It was very scary to me,” admits Beth Siegerbaum. “But it’s hard to argue against helping someone else live.”

Thompson’s surgery was performed by Dr. Anthony Watkins, a transplant specialist who estimates he has done more than 500 kidney transplants. He said that while some cases can present difficulties, Thompson’s three-hour operation was straightforward. “Her kidney function is good; her prognosis is good,” he said.

A direct donation is when a person offers to donate to a specific person. However, the kidney must be compatible with the recipient. In a paired exchange, the donor gives his or her kidney to another recipient in exchange for one that is compatible.

With advanced donation, the exchange takes place but not at the same time. Finally, a good Samaritan donor gives a kidney to a stranger and sets off a chain of paired exchanges that typically involve from two to 30 patients. Dr. Anthony Watkins noted that the largest of these chains occurred in 2008 and involved more than 50 transplants, all “triggered by one man coming forward.”

Watkins said that Holowinko should also do well. For healthy donors, “studies show there is no decrease in survival, and no increased risk of kidney failure,” Watkins said.

The number of kidney donors in the U.S. has remained steady in recent years, but Watkins said the number of paired exchanges has been increasing. While a hopeful sign, he said, “they are still a small percentage in the grand scheme of things.”

Alvin Roth and Lloyd Shapley won a Nobel Prize for economics in 2012 for work that included the creation of the kidney exchange. They noted that while dialysis costs about $70,000 per year, a kidney transplant costs about $260,000, making it cost effective in fewer than four years.

Thompson said her goal now “is to have the best quality of life possible.” She quips she may write a book and call it Kidney Transplants for Dummies. Discharged from the hospital on Oct. 24, she has more challenges ahead: She will need surgery for a postoperative hernia, and she remains weak. Her medical bills are paid but she is not working (she cannot return to working with children because they carry too many germs for her compromised immune system) and faces expenses not covered by insurance. These incude an extended stay in a hotel near the hospital for the next six weeks. A GoFundMe page has been established to help.

One thought on “Leesa Has a New Kidney”