Who will be growing our food?

Leslie Lewis was 24 and expecting to pursue a career in public relations when she took time off to work at a 6-acre Connecticut vegetable farm.

“After that I knew I wanted to be a farmer,” she says.

Soon after, Lewis, who grew up in Illinois, landed a job in development at Scenic Hudson, the nonprofit based in Poughkeepsie. But after a few years in the office, she quit to travel in South America.

In Argentina, she worked at two organic farms. “I was doing what’s called ‘wwoofing,’ which comes from a program called Willing Workers on Organic Farms,” a network also known as Worldwide Opportunities on Organic Farms. “You work for room and board,” Lewis says. “It was a lovely way to see the world as well as other ways of farming.”

When Lewis returned to the U.S., she was ready to dig in and found work on a farm in Red Hook.

“It was owned by a woman, and the only other worker was also a woman,” Lewis says. “Women are still a minority among beginning farmers, but there are many more of us than in the past. The work is inspiring and empowering and nurturing. Women are by nature farmers.”

The work at Red Hook was intense and demanding. “There’s so much more to farming than people know and so many skills to hone,” Lewis says. “Which tools for weeding? When are vegetables ready for market? What are the techniques for planting seeds? I realized I had so much to learn.” 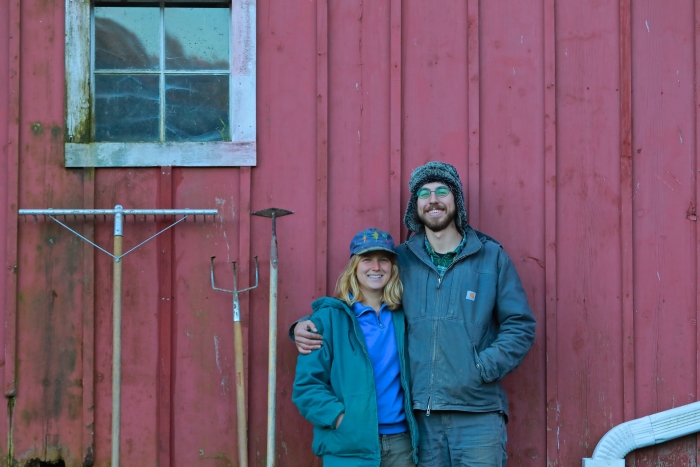 That is why, she says, she signed up earlier this year as an apprentice at Glynwood, a nonprofit farm outside Cold Spring that allows beginner vegetable and livestock farmers to live, work and study on the farm for a season. Her lessons have included instruction in finances, small-engine repair, carpentry, soil and forestry.

She also met Anthony Post, a fellow apprentice who abandoned his pursuit of a doctorate in physics to go into farming. The two fell in love and next spring will start farming vegetables as partners on a 1.5-acre parcel they have leased in Gardiner, in Ulster County.

Lewis says that, like the vast majority of young farmers, she and Post are committed to organic and sustainable practices. Their parcel will be part of a larger farm, one of the number of operations in the Hudson Valley that allow beginners to lease a small plot to test their skills. Lewis and Post plan to sell shares of their crops to customers through a CSA (Community Supported Agriculture) system. Residents pay a fee at the start of the season and then can pick up weekly packages of seasonal vegetables.

Lewis says she and Post already have 50 shareholders. Their immediate goal is to learn how to make a profit, so they can expand. But the price of land is a huge barrier, she says.

As for where to farm and what to grow, Lewis laughs and says, “It’s like dating. There are so many things to take into account.” One dream is to someday have a small nonprofit farm for women who have recently been in prison. “Farming is therapeutic, gratifying and grounding. It would be a place for rehabilitation and empowerment.”

When farmers retire without heirs, most of the land that they leave behind and that younger farmers could lease or buy, has already been used to grow conventional crops, with pesticides and tractors that contradict “no-tillage” organic standards. So, will young farmers dedicated to organic and sustainable farming be able to find suitable and also affordable land?

“There are many remedial things that can be done on that kind of land, including replacing the lost organic matter,” Lewis says. “The Hudson Valley is not only beautiful, it has such comradeship in the farming community. It gives us enormous support, and has abundant resources to help people like us become farmers.

For Larisa Jacobson, farming is more than just farming — it’s about creating a more just and healthy world and righting the wrongs of racism, colonialism and oppression.

As the manager at Soul Fire Farm in Grafton, east of Troy, the Beacon resident is part of a team that this season trained 120 aspiring farmers, all black and brown people in what has traditionally been a white (95 percent) and male (86 percent) industry.

At 41, Jacobson’s resume spans continents and the most challenging, life-or-death issues of our time: HIV/AIDS services for immigrants, sustainable energy and public health, and preserving ethnic identity. As she worked with disadvantaged communities, she says, food and farming intersected.

“Through the lens of structural racism, I saw scarcity and disconnection from the land and access to nutritious food,” she says. “Discrimination and barriers to prevent black and brown people from thriving were issues that kept coming up.”

Jacobson, who grew up near the Squirrel Hill neighborhood of Pittsburgh with a Chinese mother and a Jewish father, said attending schools that had primarily black leadership and racially integrated student bodies “helped shape my path.” Racism struck close to home on Oct. 27. Her grandfather attended the Tree of Life Synagogue, where 11 people were killed by an anti-Semitic gunman, and her parents live nearby. 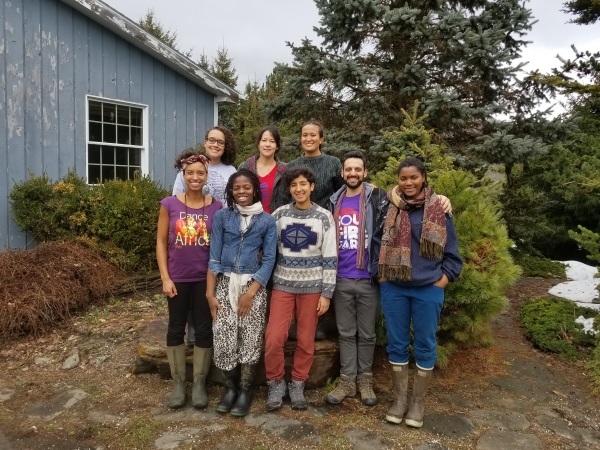 Larisa Jacobson (middle, back row) with the team at Soul Fire Farm, including co-founders Leah Penniman and Jonah Vitale-Wolff. (Photo by Eb. Brown)

At Soul Fire Farm, where Jacobson stays two to six days per week, she and her colleagues have trained nearly 500 people through the Black-Latinx Farmers Immersion Program (the “x” signifies gender inclusivity) and nearly 90 percent have gone on to work in farming and food-justice programs.

Soul Fire’s program covers all of the things you might find in other programs about how to grow food and run a farm, but it also addresses the trauma people of color suffer from institutional racism, the history of farmers of color, and builds a safe, supportive community, Jacobson says. Work is done in a way to help heal the farmer’s relationship to the land and celebrate their connections.

Her approach to farming uses regenerative practices she describes as “healing the soil.” The food Soul Fire Farm grows on 2 acres in Grafton is delivered to doorsteps in the community around Albany through a CSA (Community Supported Agriculture) that works on a sliding scale based on cooperative economics. The farm offers 80 to 100 shares each season and feed an average of 350 people, she says. Shares cost $23 to $50 per week and this year they gave full scholarships to immigrants, refugees and people affected by violence. “We want to make food available to everyone in the community regardless of income or other barriers,” Jacobson said.

Jacobson says the crops include black diasporic and indigenous food at the community’s request such as collard greens, okra, hibiscus, tomatillos, maize, amaranth and chile peppers. “Typically [commercial] food is canned, processed and high in sugar,” she says. “We offer food as medicine; it supports life. Fennel, for example, has been used for centuries to support the immune system and digestion.”

Soul Fire’s website has a “reparations map” that charts members of the Northeast Farmers of Color Network and food-justice projects, allowing visitors to donate land or money to account for land and labor taken over the centuries from indigenous and people of color, she notes. “The map is to coordinate in partnership,” she says. “It’s not an official effort for reparations but in spirit.”

The nonprofit assists veterans “who want to get into farming, or need to know what resources are out there to help them,” says Lemondes, 53, whose military career spanned 27 years.

“It’s not a ‘pay-for-your-equipment’ type-thing,” he explains. Instead, the chapter guides veterans toward resources to assist with land acquisition, financing and the other nuts and bolts of an agricultural operation.

“Farming is one of the hardest vocations that exists in our country,” says Lemondes, who first worked, at his father’s insistence, on a farm picking fruit during the summer after fifth grade. “The risk factor is tremendous.”

In addition, the industry is in the midst of a massive demographic shift as large numbers of farmers are close to retiring “and there’s not enough new farmers behind those who are producing our food to take their place,” he says. 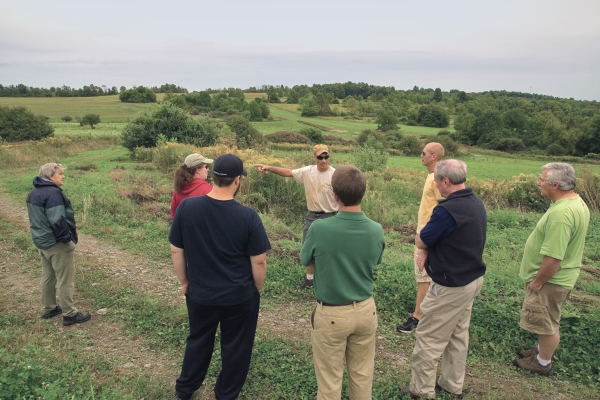 John Lemondes (center) leads other veterans on a tour of his farm, Elly’s Acres. (Photo by James Bemus)

That concern led New York to create, in 2014, the Beginning Farmers Workgroup to provide on-the-job training for veterans seeking careers in farming. The Small Farms Program at Cornell University also partnered with the state to expand its training in which veterans receive wages as well as a military housing allowance through the G.I. Bill. And last year, Empire State Development, in coordination with the state Department of Agriculture and Markets, launched a $250,000 Veterans Farmer Grant Fund.

Cornell has trained more than 800 veterans — from 24 to 67 years old — in the last three years, says Dean Koyanagi, an associate with the university’s veterans in agriculture program known as “Farm Ops.”

“We have a wide range of participants, from people on Wall Street to young guys who have served four years in the military and are finished,” Koyanagi says. “We offer a customized service for each person.”

Most of their participants, regardless of age, are attracted to the farming lifestyle — hard work, long hours and all — but may lack the administrative know-how to run a business, he says. “Our support is to keep track of that veteran, so he or she can actually get all the resources that are out there.”

All the various programs, Lemondes said, show that the state “is recognizing the people [farmers] that the public takes for granted” before they’re gone.

If they’re not recognized, he says, “these guys are retiring, and there’s going to be a problem.”