What happens when the children move on?

Joe Hasbrouck, 74, is the fifth-generation of his family to farm in the Hudson Valley, dating to the 17th century. His forebears settled in New Paltz along with other Protestants fleeing religious persecution in France. They moved to farm in the Rondout Valley near Kingston on what is now 330 acres of corn bordered by Esopus Creek.

Hasbrouck and his wife, Vivian, have two daughters who each live half a mile from the farm. One is a teacher, the other is employed in banking. Like the offspring of other farmers across the valley, neither has any interest in agriculture. The Hasbrouck farming line will soon come to an end.

A third of the farmers in New York state are 65 or older, and one survey found that 90 percent of them have no successor. Two million acres of farmland could be taken out of production in the next decade or two. More than 4,000 farms have been lost to real estate development in New York since the 1980s, according to the American Farmland Trust.

Liz Corio, vice president of development at Glynwood, a farm-based nonprofit outside of Cold Spring that promotes Hudson Valley farming, notes that, according to an agricultural census completed in 2012 (the most recent available), the average age of farmers in Putnam, Dutchess and nearby counties is 58. “Every year we hear of farmers deciding to just move out and go,” she says.

Fifteen organizations, including the American Farmland Trust, Glynwood and the Dutchess Land Conservancy, have created a coalition, the Hudson Valley Farmlink Network, to prevent that from happening. One of its projects is an online farmland finder, which, like a dating site, matches farms for sale or lease with aspiring farmers. Its listings include 16 farms in Dutchess County, 17 in Orange, 17 in Ulster, and four in Putnam, including the 250-acre Sugarloaf Farm on Route 9D in Garrison. The group also helps farmers with succession plans.

The life of a farmer is notoriously demanding. As farmers age, the load typically shifts to the next generation. But if there is no successor, farmers often must shift to low-maintenance, low-labor crops, as Joe Hasbrouck did.

“It’s not a lucrative business,” he says. Fifty years ago, when he started, the farm thrived with sweet corn, a labor intensive but profitable crop that required 50 farmworkers during the summer who are today not so easy to find. 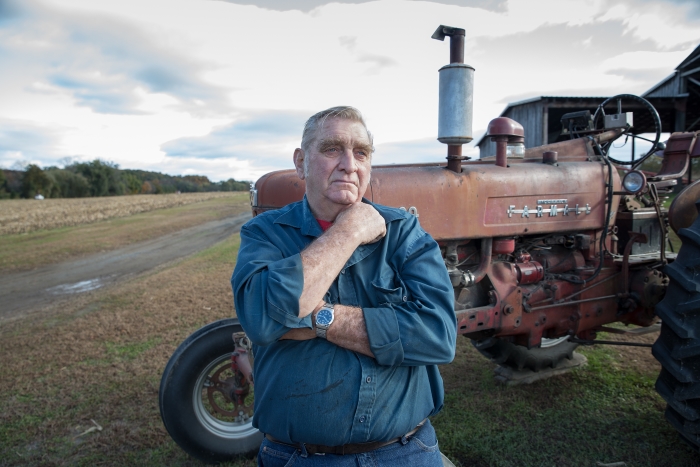 Gradually Hasbrouck switched to field corn, which can be harvested with a machine and is used mainly as livestock feed. He also experimented with red beans, which don’t require much labor, but eventually dropped them. He has an employee who has been with him for about 30 years, and the employee’s son. “We farm about 285 acres and we do everything ourselves,” Hasbrouck says.

As with most farmers, Hasbrouck’s equity is in his property and equipment. Without an heir, a farmer usually is forced to sell to finance retirement.

“My health is not perfect, but I’m not ready to quit yet,” says Hasbrouck. But, he concedes, if he were offered the right price …

“I have no regrets about being a farmer,” he says. “I’ve had a good life. But I have a degree in agricultural engineering and if I’d had a crystal ball, maybe I’d have gone to work in something where there are benefits like those a person in the business world gets when he retires.”

One of the challenges facing farmers is the lack of a profitable export markets. “Foreign countries get subsidies so their products are cheaper,” Hasbrouck says. “It’s not that I want subsidies — I want a fair market.”

He adds: “I don’t see people rushing into farming unless it becomes profitable. Middlemen get the profits at farmers’ expense. Agriculture in general was looked down on for so many years. Even now people are so far from farms they think their food comes from the grocery store. Nothing will change until people are educated about how important farming is.”

Hasbrouck Farms is surrounded by farmland that has been abandoned. “You’d see a lot of farmers back if we could at least get a 10 percent profit for our produce,” Hasbrouck says. Climate change has added to the burden. “For example, wheat was a common crop,” he says. “Now almost none is grown because of the increased moisture. It sprouts on the stem — something you never heard of 60 years ago.”

He admits it will be a heartbreaker when he sells, especially if the property stops being farmed. “The son of my employee expressed interest, but he would need considerable financial help,” Hasbrouck says. “It costs me at least $200,000 a year to run the farm, and it’s a complicated business. He’d need guidance for at least a few years.”