Barbara Scuccimarra, a Republican, is seeking her third, three-year term on the Putnam County Legislator representing Philipstown and part of Putnam Valley. She is being challenged by Nancy Montgomery, a Democrat and member of the Philipstown Town Board. The general election is Tuesday, Nov. 6. 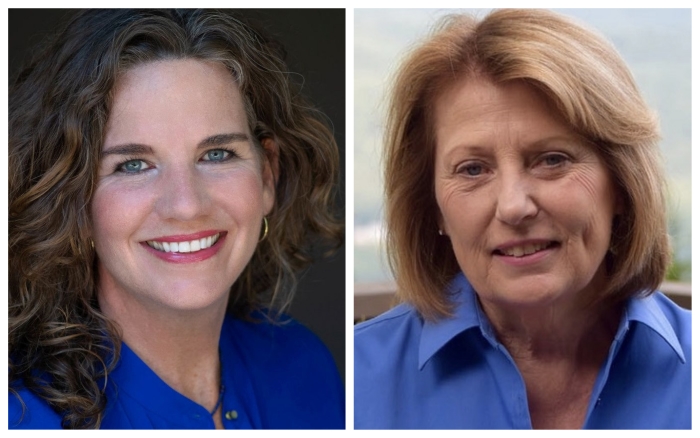 What is the most important issue you would like to see the legislature address on behalf of Philipstown residents?

Montgomery: Each town in Putnam County has its own needs and has elected a representative to the Legislature whose role is to advocate for those needs. What has been missing is representation to address issues specific to our district. As your representative on the Legislature, I will make the issues of Philipstown and Putnam Valley a priority. The No. 1 issue that I’ve heard residents from all sides of the political spectrum express is taxes. We can tackle this issue at the county level by cutting wasteful spending and the bloated budget.

Scuccimarra: The top priority for all elected officials is the health and safety of the people they represent. I care deeply about my constituents’ quality of life. I do so first by listening, then by working actively to get things done. I have been at the forefront in the creation of the new Friendship Center in Philipstown: our seniors deserve a space where they can access important services. The new center is also vital to our community; a space for expanded county services that haven’t been available in western Putnam. The local environment is also important to me, as demonstrated by my strong environmental activism. I introduced legislation to ban takeout Styrofoam containers in food establishments. I worked with Riverkeeper, Scenic Hudson, and our state and federal representatives to stop the Coast Guard from parking hazardous barges along the Hudson River.

The county contributes $7,500 annually to Cold Spring for garbage collection because of the large number of visitors. What more could the county do, if anything, to support tourism in Philipstown?

Montgomery: Seventy-five hundred dollars to Cold Spring for garbage collection is welcomed with gratitude but it’s not a fair deal out the close to $2 million in sales tax revenue or as a portion of the $224,000 tourism budget. The county should be allocating funds and resources based on need and opportunity. Cold Spring has to manage literally boatloads and trainloads of tourists. No other town in Putnam sees this kind of tourism, yet the bulk of county tourism dollars are spent elsewhere. Both the need and opportunity are here – in this district – and resources from the county should be increased to match. And what about things like Hudson Valley Restaurant week? Dutchess, Rockland, Ulster and Westchester are all sponsors. Putnam is not. Such missed opportunities to generate tourism dollars.

Scuccimarra: The county already does quite a bit to support tourism in Philipstown. Cold Spring and Garrison are well-represented on the Putnam County Visitors’ Bureau website. Cold Spring is the only community that receives a direct county payment to help defray the impact of tourism. Every year I have to fight for it, and will always do so. The trolley is exclusively county funded and transports tourists to destinations throughout the town. My goal is to improve its ridership by working with state parks and the Cold Spring Chamber. Next spring the trolley will add a tour of our area museums.

What should the No. 1 priority be in Putnam County to help stem opioid abuse?

Montgomery: This is a crisis that is always personal, deeply shattering to families and touches everyone in our towns. What I’ll bring as a county legislator is a stronger, coalition-based approach. Residents of all ages, the afflicted in all stages of recovery, and leaders in all levels of government need a seat at the same table to have an honest discussion. I’ve heard firsthand from our children that peer pressure is the biggest cause of anxiety and temptation when it comes to drug use. NewYork-Presbyterian Hospital just opened operations in Philipstown, yet there is not one office for behavioral mental health. Philipstown’s own recovery treatment coordinator and I have started the conversation with NewYork-Presbytetian and local emergency rooms to make behavioral health resources as accessible in Philipstown and Putnam Valley as getting a flu shot.

Scuccimarra: I’m chairwoman of the One Army in the War Against Addiction Task Force, an issue that is critical to me. The first task force initiative, “T-21,” which raised the legal age to purchase tobacco and vaping products to 21, was just passed this month. I also successfully championed legislation to ban the sale of synthetic drugs in Putnam. Next on my legislative agenda is to require local pharmacies to take back unused or expired prescriptions.

Should the county own a golf course and Tilly Foster Farm?

Montgomery: It’s not a good thing for government to be competing with privately owned golf courses and privately owned restaurants. The county has bonded millions of dollars to provide these amenities, which are money losing. This is not the role of county government, to manage these money pits while raising taxes, failing to provide even one new program for seniors or teens in Philipstown or Putnam Valley, and cutting funding for critical safety programs like school resource officers. So, at this time, no, the county should get out of the golf course and restaurant business. Leave that for rich guys like the president.

Scuccimarra: Probably not. However, given that a previous administration purchased these properties, using open-space funding, we couldn’t easily dispose of them. The county has worked to recoup the taxpayers’ investment. In the past, they were neglected, but are now generating revenue, enhancing their long-term sustainability, while maintaining open space and protecting the watershed.

The political divide between eastern and western Putnam County is cited often. How can east-west communications be improved?

Montgomery: Improving communication between eastern and western Putnam County can resolve everything that divides us – and this is why I am running. I would like the residents of District 1 and their elected officials to be more confident of the county’s ability to communicate in response to disasters, preparedness or to general overall information sharing. We can start by encouraging and offering training in the Federal Emergency Management Agency’s method of National Incident Management System. Being trained, at the minimum to what the federal government recommends for elected officials can break the divide and help the county understand the importance of communicating with municipalities in their jurisdiction.

Scuccimarra: There shouldn’t be a divide. As your legislator, I am Philipstown’s representative to the county. I report on county business at monthly town board meetings, televised for all to see. No other county legislator does this. I always ask for feedback at these meetings, but honestly, I rarely get any. I believe open communication is the best way to serve all residents. I truly enjoy listening to residents’ concerns and questions. I also work to help residents on an individual basis. I’m just a phone call or email away.

I want to clarify the perceived issue of not getting “value back” from the county for sales tax collected in Philipstown and sent to the county. Philipstown contributes about 4 percent of the county’s annual sales-tax revenue. In return, the county pays for local elections, our community college costs (which no other county does), provides sheriff patrols, highway maintenance, social services, and helps fund our libraries and museums, among other things.

Is the new senior center at Butterfield a sound financial deal for taxpayers?

Montgomery: I want services for seniors and a wonderful place for them to go during the day. The county could have been providing more services all along and chose not to – that’s why I initiated services through the Philipstown Recreation Department. Putnam County has committed taxpayers to a 15-year lease that will cost at least $2.85 million over its term. This year alone Putnam County has paid more than $200,000 in rent for an unoccupied space. This is not a sound financial deal for taxpayers considering the county services could have been delivered just as well at a revitalized American Legion hall. We could have helped our veterans in tandem with more programs for seniors if the county had made better choices.

Scuccimarra: For years, our seniors have dealt with inadequate facilities. Finally, Philipstown (which has the county’s largest percentage senior population) has an ideal location to access services and activities. After years waiting, what is that worth? Are schools meant to be a sound financial deal for taxpayers? Libraries? This is a responsible deal for taxpayers, and I worked very hard to make it that way. We now have our own senior center, funded by the county, bringing additional tax dollars back to our community. The landlord has leased the space to Putnam County at below market value, and at discount rate over commercial tenants. This space is vital to bringing important community services to this side of the county.

The Legislature often seems to simply go along with the county executive. As a co-equal and separate branch of government, should it be more independent?

Montgomery: The Putnam County Charter clearly defines the separation of powers and duties between the county Legislature and the county executive. Good government works when there are checks and balances. Yet, years of essentially one-party rule has resulted in what looks, feels and acts like a rubber stamp from the Legislature. Our towns need representation that works for them – not the county executive. When you hear me say “we” as a county legislator, I’ll be talking about us, the people of District 1, not the administration.

Scuccimarra: The Legislature is entirely independent from the administration. As items are presented, they are referred to relevant committees of the Legislature where they are researched and debated. It is very rare for there to be complete agreement, and none of these discussions include the county executive. I encourage Philipstown residents to attend these committee meetings to see how the process works. After legislation is voted at committee, it goes to the full legislature for discussion and a vote. Some issues, like the T-21 law, take months in committee and on the floor of the Legislature for a consensus to emerge. However, I’ve also been the only “no” vote when I have believed the outcome wasn’t in the best interests of my constituents or the county.