For a long while it was thought unlikely that mechanical devices could ever do the delicate, risky job of identifying and destroying weeds on Hudson Valley farms without damaging crops.

But with a continuing shortage of farm labor, along with a preference for organically grown, pesticide-free produce, robotic weeders are creeping into the agriculture industry.

Robotic weeders, using artificial intelligence, are replacing humans spraying pesticides. They will soon take the place of workers on organic farms who bend over for hours to pluck weeds, and aircraft dropping pesticides. 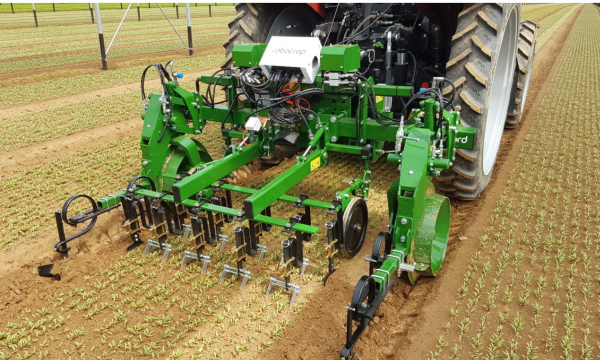 “No one in the area has made the investment in one yet, price being the main reason,” says Ethan Grundberg, a vegetable crops specialist with the Cornell Cooperative Extension who attended the demonstration. Robotic weeders c currently run between $120,000 and $175,000.

In Texas, a company called Blue River Technologies has designed a robot called See & Spray that can identify a crop and deliver herbicides only to the weeds, covering the equivalent of four football fields per day. (The John Deere tractor company recently bought Blue River for $300 million.)

Once there is confidence in their effectiveness, and the price drops, weeding robots are predicted to reduce pesticide use by about 90 percent globally, which will pose a huge threat to the pesticide industry. And for many growers, especially organic farmers, robotic weeders will dramatically reduce the cost of labor.