Stan Lindwasser says he has an internal, creative need, at age 71, to “work on the possibilities until I get bored.” So every day he paints. “I like making shapes and forms, letting the liquid dry. I like natural forms, gravity, movement.” 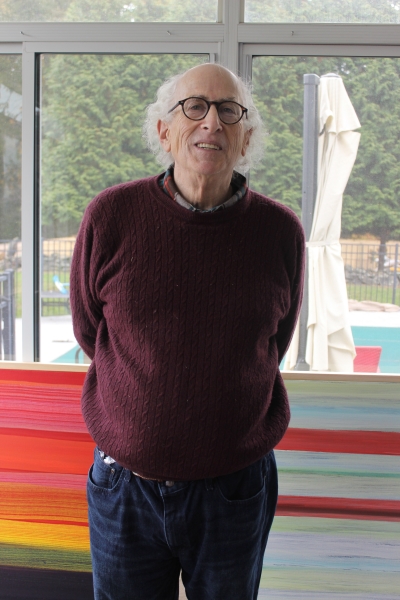 Stan Lindwasser (Photo by A. Rooney)

Earlier this year, a few of his many paintings were hung at Oak Vino Wine Bar on Main Street for the opening reception of Beacon Open Studios. The proprietor, Rinny Shah, liked what she saw and invited Lindwasser to mount a solo exhibition. Titled Paintings 2018, it opens on Second Saturday, Nov. 10, with a reception from 6 to 8 p.m. Lindwasser’s colorful, striped paintings are all untitled because, he argues, “naming things is a misdirection.”

Lindwasser paints in his studio on the perimeter of his Beacon backyard. He and his wife, Helen Crohn, a therapist and social worker, moved to the Highlands in 2016 from a brownstone in Hoboken. They were introduced to the area by their daughter. “She thought it would be good for us. We were going to Manhattan less and less; the New Jersey taxes were terrible; the transportation was good; and we wanted more of the country,” Lindwasser says.

The artist says he knew from an early age what he wanted to do with himself: “I was told in kindergarten I was gifted in finger paints!” He grew up in Brooklyn and Westchester and benefited from an inspiring high school art teacher. Before his senior year, his family moved to Manhattan and he feasted on all the art there; he later earned a BFA and MFA from Hunter College.

His first works were installations. He painted on cord, then strung the cord on frames, forming three-dimensional grids. One was exhibited in the courtyard of the Brooklyn Museum and others at the Brooklyn Public Library and the Bertha Urdang Gallery in Manhattan. He began to paint, and there was a period when all he did was self-portraits, “varying the proportions of the features, though not in a fun-house way, although it did scare the kids a little. It was sort of like a collection of ancestors — but they were all me.” 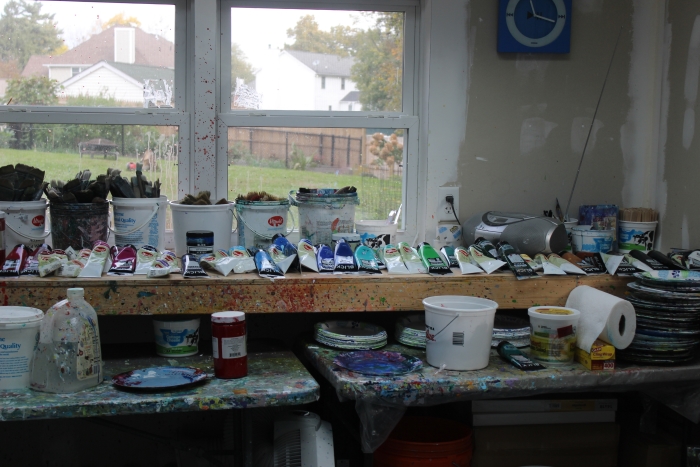 A painter’s tools (Photo by A. Rooney)

He also taught full-time to pay the bills. He and Crohn met at a synagogue. “He picked me up at a kiddush,” she recalls with a grin. Along the way, they moved from 14th Street (the rent — he remembers each amount — was $46 a month), to Delancey Street to a sixth-floor walk-up on 9th Street ($85) and, finally, to a nine-room apartment on 84th and West End Avenue (you don’t want to know how little it cost back then). They moved to Hoboken when Helen became pregnant with the first of their three children.

Throughout those years, Lindwasser taught art during the day and made art during the evenings. “He was never a promoter,” Crohn says. “He was very paternally focused.” His teaching took him to a Bronx school for emotionally disturbed children, then to a psychiatric facility, then to homeless shelters to teenagers at Harlem Hospital.

For Crohn, there was acceptance. “That’s the way it goes,” she says. “We didn’t live in Europe, where there was government-sanctioned support for artists. And we had no rich parents.” She adds, wistfully, “I sometimes think that if we hadn’t met, Stanley would have been more recognized.” Her husband isn’t buying it. “The most important thing is family,” he says. “And making art. That’s it.”