John Benjamin doesn’t remember his grandfather well, but as the 100th anniversary of the Armistice that ended the fighting in the first World War approaches on Sunday, Nov. 11, he hopes others will remember what Thomas H. Ellett accomplished. 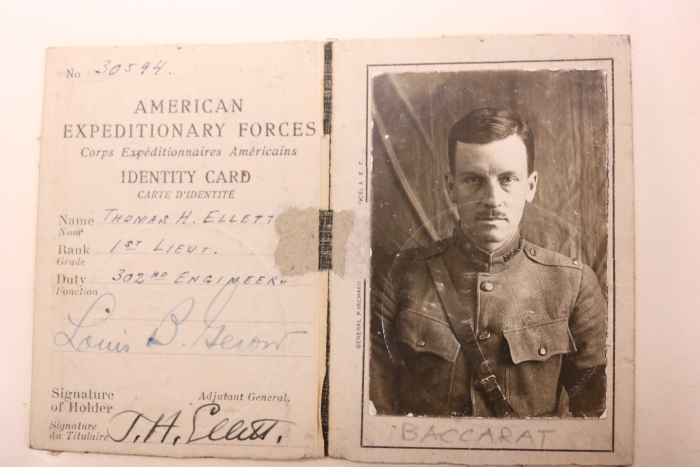 A captain in the U.S. Army who later in life moved to Philipstown, Ellett left behind a wartime diary that is on display at the Desmond-Fish Library through Nov. 15. It provides a detailed account of life on the front lines in France leading up to the 1918 Armistice. (See below for excerpts.)

“It’s important to have such a clear, detailed, immediate record of the events” from a century ago, says Benjamin, who lives in Garrison. “If we don’t know where we have been, how can we know where we are headed?” 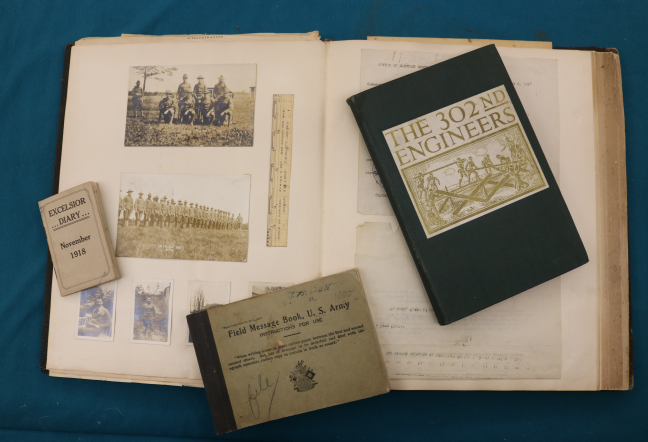 A scrapbook and other material owned by Thomas Ellett (Photo by M. Turton)

Thomas Ellett was born in Red Oak, Iowa, in 1880 and graduated from the University of Pennsylvania in 1906. When the U.S. entered the war in 1917, he was a 37-year-old architect. He enlisted, completing basic training in Plattsburg, New York.

Once he arrived in France, Ellett commanded Company E of the 302nd Engineers. Its duties included building and rebuilding bridges and keeping roads passable for horses, vehicles, artillery and troops. The company often came under fire; two of Ellett’s men were killed and five wounded while the company worked on a foot bridge over the Meuse River.

Ellett didn’t shy away from the action. An article in the New York Evening Sun on Oct. 20, 1918, described him scouting the Aires River for a suitable location to construct a bridge. After he waded into the river, “machine guns opened fire upon him,” according to the newspaper account. On the far bank, Ellett located the machine gun nest, fired at it several times with his pistol, “took a quick survey of the north bank,” and waded back to shore. 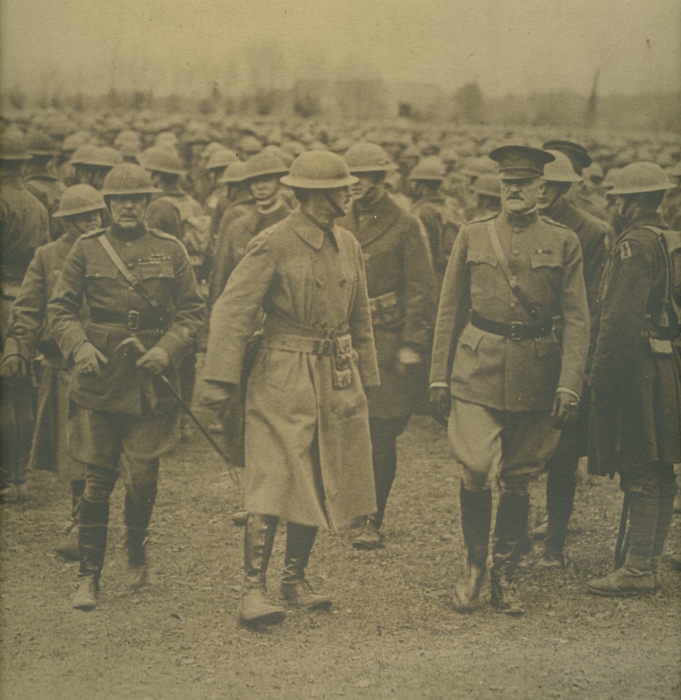 Thomas Ellett (center) with General of the Armies John J. Pershing (right), who commanded the American forces on the Western front in 1917 and 1918. (Photo courtesy John Benjamin)

At the time of the Nov. 11 armistice, Ellett wrote in his diary that he hoped to be home by Christmas, and he was, John Benjamin says, returning to his career.

Benjamin hopes his grandfather’s war documents, which have never been seen outside of the family, can be put to good use, possibly providing material for a graduate thesis. There is a great deal of material that is not on display, he says, including maps and sketches of buildings, bridges and other engineering projects in France.

In 1937, Ellett moved from Iowa to Garrison, where he married Joan Bigelow of Highland Falls. He died in 1951 and is buried in the churchyard at St. Philip’s.

The Benjamin family has a long history of military service. John’s great-grandfather, Samuel Nichols Benjamin, graduated from West Point in 1861, in the same class as George Custer, and served in the Civil War. Another great-grandfather, John Bigelow, also graduated from West Point. His father, John Hoffman Benjamin, served in the Army during World War II in North Africa and Italy. 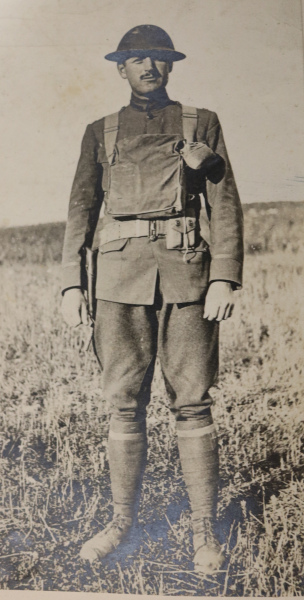 Try to work on St. Juvin ­— Champigneulle Road. Stopped by violent M.G. [MG 08, the standard German machine gun] and 9mm fire. 2 squads out in PM … Scouts watching … Moved from camp at 6 AM. 5 men wounded by shell fire while getting out. Camp on road bank – near St. Juvin. Dig in … under shell fire.

Move co. out at 10 AM … clear and fill many shell holes. Into town at 5:15. Later learned that patrol captured 3 Bosche [Germans] there half an hour before. Enemy in full retreat.

Up at 4:30. Co. moved before 6 AM. Moved at 12:30. Good lunch for men before starting. An awful fast time keeping up with enemy. No resistance. Col. informs me he has recommended I be returned to U.S. as major.

Move at 8 AM to hillside just west of St. Pierremont which was being heavily shelled. – HQ at old stone mill near by. Big comfortable rooms.

Up at 5:30. Co. marches to Oches to work on artillery bridge. (1 squad on culvert) Salvaged heavy RR rails and ties. Orders to stop work at 4:45. 45 min. would have completed. Move to La Berliere … 1 pltn [platoon] back at night to complete bridge. Civilian woman welcomes us with joy.

Awake at 2:30 AM by Capt. Simmons. Orders to move at once to Rancourt. Lt. Gray and I start at 4 and reach Villers des Mouzon at 7. To bridge site Meuse. Notice 5 Bosche [Germans] 200 yards away. Shout to them for 15 minutes. They did not fire. Reported reconnaissance … Completed foot bridge at 3:15. 2 Inf pltns [infantry platoons] passed over at once. I had 2 men killed + 5 wounded on job (mostly after work was finished). Back to Rancourt to billets with French family who cannot do enough for us. “La Deliverance!” they all shout in the streets. We were first horsemen in. Great invention: Bread + Jam. Very tired. 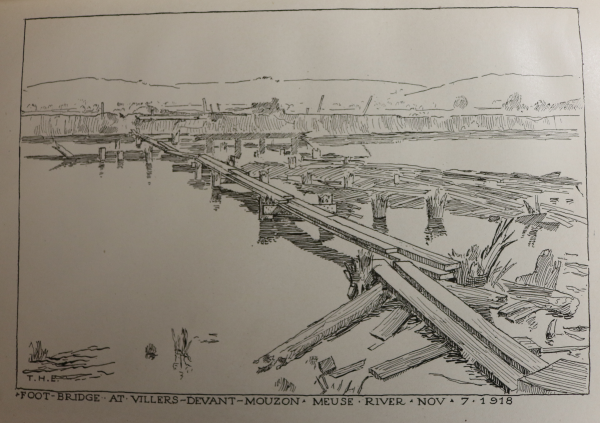 The footbridge constructed on Nov. 7

With Col. Simmons + 117th Captn (42nd on our left) to Remilly. Constructed a foot bridge across canal! Some distant Bosche. Saw sedan burning on our left. No orders for tomorrow! Col. G prophecies war will be over within a week. (A few shells … last night.)

Burial squad to Villers M for Pvt. Hartman + Brill. 1 platoon in PM filling mine crater and shell holes on Remilly – Autrecourt Road. All excited about peace rumors. Col. G wants no more men killed or wounded. Unofficial that there will be no more shelling of towns. German officials crossed our lines yesterday to see [French general] Foch.

Free day. No work. Except to find and guard bridge material for Meuse … Baths and clean clothes. Capt. La Fetra returns from hospital. He is named as sub for me. To return to U.S. as major – Capt. Collins + he for dinner

“Hostilities will cease along the whole front 11 Nov. 11 hours French o’clock. After that date + that hour there will be no further advance of Allied troops.” Gen. Foch telegram, 7:20 AM. All very excited, especially French people. French taking over our sector. Town crier informs civilians they can come back to village.

French relieve us. Civilians cheer as they march in. 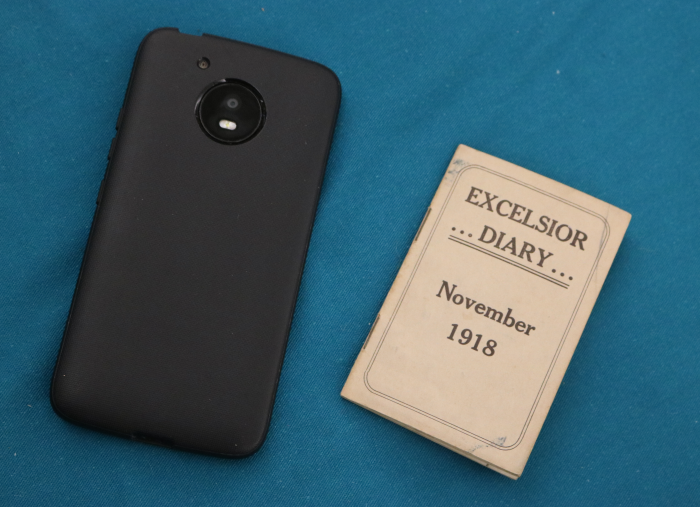 Beefsteak lunch – 1st for several weeks. Informed I have been recommended for Belgian Cross, 8 in Division. My bridge detail cited in 9.0. Kaiser gone to Holland 11 Nov. Co. works on road.

Cleaning up transport and equipment … Hope to go home soon. My bet is that 77th Div. (or 302 engr [engineers] at least) will be home by Christmas! Dinner – Sardines! Steak, Potatoes, Rice, Tomatoes, Grape Jam, Coffee, Cigars.