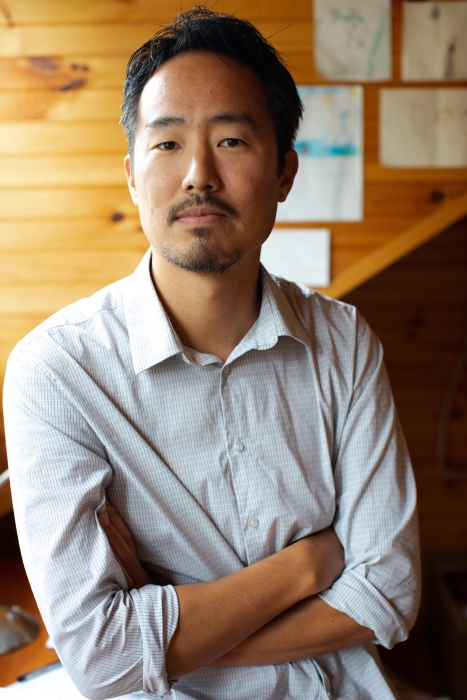 Jeffrey Yang, who lives in Beacon, is a poet whose most recent collection, Hey, Marfa, was published last month. In 2009 he won the PEN/Joyce Osterweil Award, which is given biennially to an emerging American poet. He will read at Split Rock Books in Cold Spring at 7 p.m. on Friday, Nov. 16.

When you moved to Marfa, Texas, in 2011 for a writer’s residency, did you know what form your work would take?

I actually went to Marfa to translate [human rights activist and Nobel Peace Prize winner] Liu Xiaobo’s June Fourth Elegies. I had no idea I would want to write anything myself. It was a gradual process over maybe five years for me to know what the book would be like. Once I hit upon a structure, then I felt more like, “I’m actually going to do this.” With poetry, for me, there always has to be a willingness to revise. There’s a lot written that is not in the book.

You’ve called Hey, Marfa “a desert diary scaled to music.” Every page of the book has a specific design, and the words almost resemble musical notations. Did you intend that?

I’ve been in other deserts, but there’s a specific vastness in the air and elevation in that part of Texas. So, the way the poems look on the page is important. I wanted to convey what it’s like when you’re out there walking or driving in extended landscapes of sand, scrub grass and hills. There’s a sense of repetition, but when you look closely it’s more unique. The look of the book is all part of trying to carry a certain kind of rhythm.

Conducting lines golden in the light

greet a few low-pitched roofs at the end
of the road, pink posts planted in a row small
heaps of dirt, weed clumps, square shadow door-

way cast on a wall, zigzag edge veers round
the posts, runs the fence perimeter, divides
the vicinity from the mind’s machinery

Spirit living energy, the matter—not with the fire
In me now—of survival, where the windswept sands
fade to asphalt, and the lines like the strings of a lyre

Strung through the sky, converge on a visible
chord sustained across the urban wilderness

reflection in the inner light outside the picture

Will you ever write about Beacon?
[Laughs.] Well, I’ve written an essay on it, but it’s hard to write about where you live. And I know so many people here. Living here feeds into what I write, although not always in obvious ways.

Does working as a translator, and also having your own work translated, make you more acutely aware of your choice of words?
It’s hard to say, because the two feed into each other. It’s been said that translating is the best way to learn how to write. For me, the appeal of a lot of poetry is the music of the language. My work has been translated into Chinese, which I know, and German, Spanish, Malay and Dutch, which I don’t. I let the translators do what they want to do; I don’t interfere.

On Amazon, Hey, Marfa, is No. 6 on the list of Asian-American poetry best-sellers. How do you feel about being classified like that?
What? I had no idea. That’s great. I’m fine with that. I have no idea what kind of algorithm is going on there. I wonder who the first five are, though?