Last month, while I was typing away to you about how to decorate your home and where to find everything, my editor reminded me: “Don’t forget to write about how to balance work and kids.” Oh, that. I prefer hiding behind shopping recommendations. Writing about work and children is a minefield of guilt triggers for me.

I mentioned this to a friend who does not have children. She confessed that she never understood why mothers struggle with guilt about working. “Do what you need to do!” she said. Right.

A week later, my crew and I were at a neighbor’s house. She’d absorbed my older two for a movie night, so the baby and I joined them after I’d fed him dinner at home (too hard to bring this messy guy anywhere). Over a plate of ravioli, she asked, “How is it all going?” 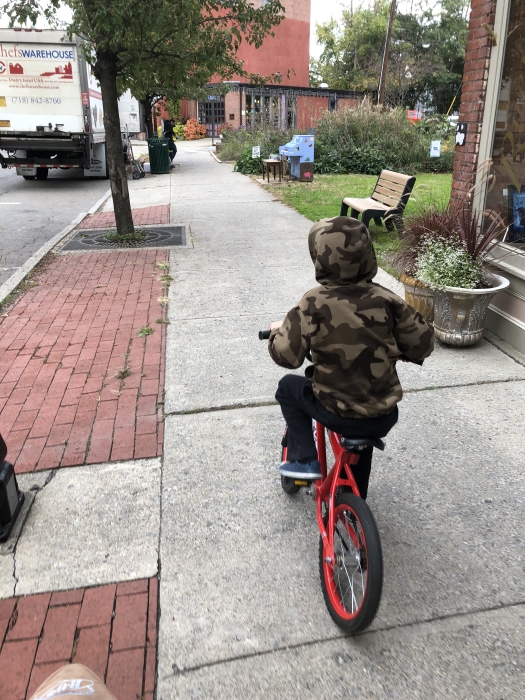 Biking to school in Beacon (Photo by K. Martin)

Since everyone is asking, here’s a day in the life of this mom. Balance comes in moments. There are plans, projections and predictions, but it all comes down to minute-by-minute acceptance and forgiveness of how it all turns out.

It was early on a Tuesday in October. Mount Beacon was barely awake in the haze and chill, and I was hoofing it to my office at 8 a.m., wearing my most fashionable set of jeans and good shoes. A company had rented my space to hold a retreat, and I needed to let them in. In Parent Time, that’s before School Drop-Off, so I was overachieving, and overcommitting.

Ahead of me was a smartly dressed young woman headed, I imagined, to her first job in New York City. As we passed each other, we did double takes. “Hey!” the woman said. I hadn’t recognized her. She was a mom-friend from the PTA, headed to her job, but rockin’ it in her day clothes with her hair blown and styled, good shoes, and cool bag. I normally see her in baggy sweats. “I thought you were a teenager!” she called to me over her shoulder. “I thought you were a teenager!” I yelled back. Mom-friends usually talk while walking away from each other.

There we were, in our work moments, kid-free, warming up our work brains as we rushed to meet deadlines. Liberating as this sounds, I was racing against a time bomb. My neighbor had graciously agreed to bring over her daughter and sit with my three children while I dashed to the office. The clients were late, so I left a key and dashed back home.

All of the children were ready. It was 8:45 a.m. You’re late for school at 9 a.m. The plan was that everyone would climb into my car, and my neighbor would go straight to work. But there was that promise I made the night before that I had forgotten. I had told my son he could ride his bike to school.

He just learned how to ride his bike — and by “learn” I mean he can pedal two times before losing his balance. Getting anywhere took a while. I put on my biggest “I’m-so-sorry” face. He’s not a crier, but his eyes welled with tears.

The other schoolchildren and my neighbor were staring at me, waiting for the verdict. Will she derail everything for the bike? “Can you take the girls?” I asked. “I’ll take this guy on the bike and stroller the baby.” I knew we’d be late, but I took the late hit and we headed to school, happily.

That is a start of a typical day. I’m out of space and it’s not even 9 a.m. Mornings are the toughest. The rest is cake, unless someone gets sick, or there’s a snow day. Oh, dear … I can’t think about that now.