Groups work to save  an overlooked resource — farmland

While sprawl has claimed millions of acres of farmland across the country, the tide may have turned — for now — in the Hudson Valley.

Rebecca E.C. Thornton, president of the Dutchess Land Conservancy, reports a “strong interest” in farmland preservation but also warns that the risk of losing land will never go away. Should real estate prices fall low enough in a downturn, there is always the chance that someone with the right funding will stockpile land for the next building boom.

“We’ve got Albany to the north and New York City to the south,” she said. “This is always going to be a high-pressure corridor for development.”

About 5,000 farms have been lost in New York state to real estate and other development since the early 1980s, but the number of acres devoted to agriculture in the Hudson Valley has stabilized, according to county data and federal numbers from 2012, the most recent figures available. 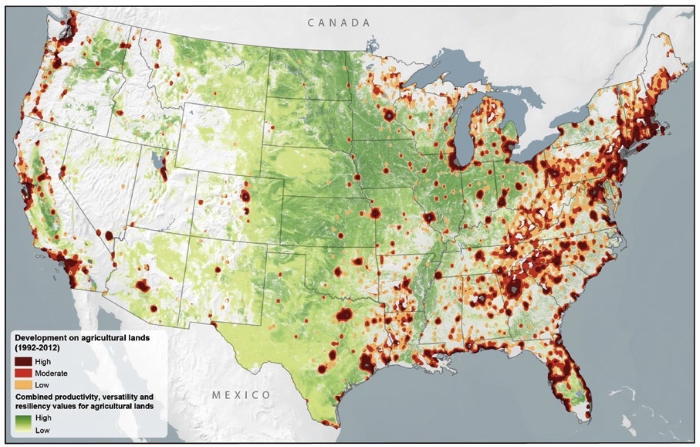 This map by the American Farmland Trust shows where farmland was lost to development from 1992 to 2012. The areas where the most land was lost are dark brown and red. The nation’s most productive, resilient and versatile farmland is shown in dark green.

But that may be deceiving. Land prices aren’t great, either, noted Maire Ullrich, the Cooperative Extension agriculture program leader for Orange County, so a farmer may stop milk production but still make hay or rent the land to a neighbor. Although the land is still agricultural, it doesn’t represent its most profitable use. And many farmers are in debt, she said.

Dutchess County has nearly 200,000 acres of farmland, which is about 38 percent of its total area. Orange County has more than 88,000 and Putnam County has about 6,000. Both Orange and Putnam’s acreages were up modestly from 2007, when the previous farming census occurred.

“We have been too wasteful too long in this country — indeed, over most of the world. We had so much good land in the beginning we thought the supply was limitless and inexhaustible.” —Hugh Hammond Bennett, “the father of soil conservation,” 1943

Those figures stand in contrast to national trends, which showed a 1 million-acre loss from 2016 to 2017. In a report issued in May, Farms Under Threat, the American Farmland Trust calculated that between 1992 and 2012, nearly 31 million acres of agricultural land (including nearby woodlands) was lost to development, about the equivalent of losing most of New York. It includes 11 million acres of the land best suited for intensive food and crop production. More than 60 percent of all development took place on farmland, it found.

“It is time for the U.S. to recognize the strategic value of our agricultural land and step up our efforts to protect it,” the report concluded, recommending the federal government dramatically increase funding for conservation easements.

Jennifer Fimbel, an educator with the Cornell Cooperative Extension of Dutchess County, said the Hudson Valley has already “gone through a lot” of the pains of losing farmland to shopping centers and housing developments. In recent years, she said, “there’s been a real push in town and county planning to say, ‘What’s going to affect farming first?’ ”

Fimbel is one of the co-authors of the State of Agriculture in Dutchess County, a report issued in early 2017 that showed the county’s agricultural districts have grown by 19 percent over the last eight years, with much of that growth occurring in the northeast quadrant of the county. Over the past 15 years, Dutchess farms have increased sales by 58 percent, it found. 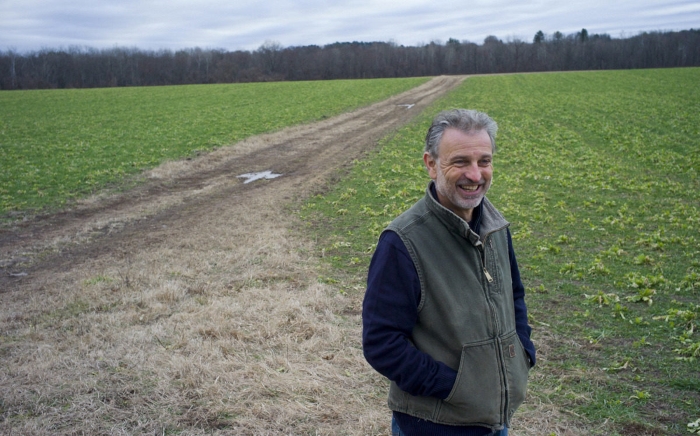 John Gill, a third-generation farmer in Ulster County, as a preservation measure in 2014 transferred ownership of his 1,200-acre farm to the NoVo Foundation, which is led by Peter and Jennifer Buffett, the son and daughter-in-law of investor and philanthropist Warren Buffett. It is now known as Hudson Valley Farm Hub. (Photo by Noel Camardo)

Adopted in 1971, the state’s agricultural district initiative authorized the creation of county programs to protect and promote farmland. In 1992, the state also created a Farmland Protection Program that, coupled with the ag districts, helps provide state and local partners for conservation organizations to protect farmland.

That’s often accomplished through the purchase of development rights from property owners, said Thornton. The landowner receives payment for a parcel in exchange for agreeing never to develop it, even if the land is sold. With the money, a farmer can stay on his or her land and use the funds for “dad to retire, a son to take over, to buy adjoining land or to improve infrastructure on the farm,” she said.

Through such agreements, the Dutchess Land Conservancy has protected more than 3,700 acres of farmland. Scenic Hudson, one of the largest land trusts in the region, has preserved 13,000 acres of agricultural land in the Hudson Valley, as well.

“Success breeds success,” said Thornton. “More farmers are coming to the table,” although “there’s never enough money” to meet all the demand.

Orange County appears to be more at risk than Dutchess because of the network of transportation corridors (Interstates 84 and 87 and Route 17) that bisect the county.

“One of the most pressing threats to farmland here is conversion to industrial uses,” says Matt Decker, director of conservation and stewardship for the Orange County Land Trust. “There’s a very high demand for industrial warehouse space” for companies like Amazon and medical suppliers.

“Those highways tend to be in flat areas and river valleys,” Decker said, which also happens to be “some of the best farmland.”