The Haldane state semifinal football game, scheduled to take place today (Nov. 16), has been postponed until noon on Sunday, Nov. 18, due to the snow storm yesterday.

The Blue Devils will face Moriah at noon at Middletown High School. The winner will advance to the Class D state championship game on Friday, Nov. 23, in the Carrier Dome at Syracuse University. There will be a sendoff for the team today at 2 p.m. at the school.

In its Nov. 14 poll, the New York State Sportswriters Association ranked Haldane No. 9 in the state in Class D. Moriah was at No. 4. Haldane has never reached the state title game, losing twice in the semifinals.

Haldane advanced to the Final Four after defeating Tuckahoe, 18-6, in the Section 1 title game on Nov. 3. Because some sections do not have Class D schools, the Blue Devils went straight to the semifinal game. 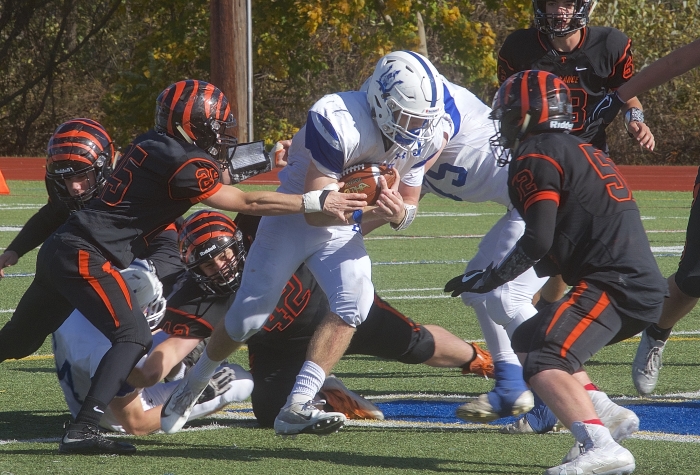 Because there are only two Class D teams in the section, Haldane and Tuckahoe play for the title each year. The Tigers handed Haldane (7-1) its only loss during the regular season when they scored a late touchdown on Sept. 7 in Cold Spring to win, 14-8.

The Blue Devils opened the game against Tuckahoe with a 5-yard run by senior Sam Giachinta in the first quarter, and he ran for two more of 10 and 29 yards in the fourth to seal the victory.

“This is the best team we’ve had in the last five years,” said Coach Ryan McConville, who is in his fifth season. “A lot of these kids were freshman in 2015, playing varsity football, and we lost a lot of games. But they grew up quickly, in the middle of a fire, and learned how to win.

“This is the first senior group we’ve had win two [sectional] titles,” he added. “Both of these teams know each other, so it’s about execution. We turned the ball over, but the guys made some big stops.” 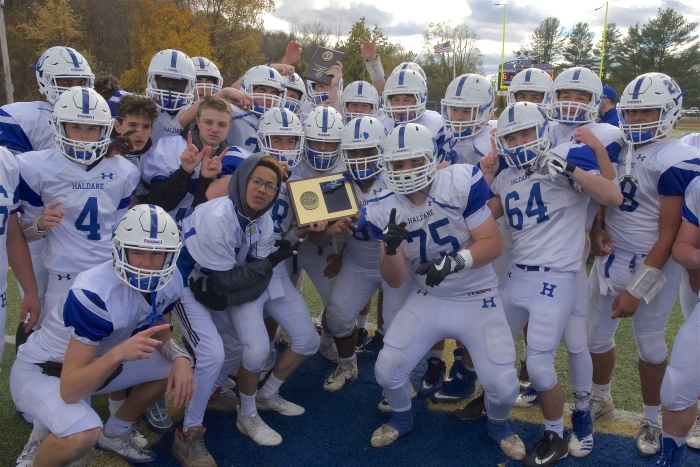 The Blue Devils got another monster game from Giachinta, an All-State pick last season as a junior. He ran 26 times for 218 yards and also stepped in at quarterback for most of the second half after starter Dan Santos went out with a back strain.

Giachinta, who has played on the varsity squad for four seasons, is approaching 4,000 career yards rushing and has 18 touchdowns this season alone.

“Sam is one of the top two or three players in Haldane history,” McConville said. “He wants the ball, and makes things happen. Matt Champlin had a big interception for us, too, and our offensive line — Will Westerhuis, Matt Ortiz, Peter Rodriguez, John Hankel — all did a great job with the pass rush. Craig Dowd also had a great game. Our guys came up big.”