Among the many New York-to-the-Highlands visual-artist transplants, Kathy Feighery and Richard Bruce are pioneers.

The two artists, who have frequently shared studio space, moved to the area (one lives in Cold Spring, the other in Nelsonville) 18 and 20 years ago, respectively, making them, if not quite old guard, at least forerunners of the common Brooklyn-to-Beacon (and now, increasingly, Newburgh) artists’ pipeline.

This weekend through the end of the year, they’ll be sharing an exhibit of new works at Create Community at 11 Peekskill Road in Nelsonville (enter on Pine Street). The show will open with a reception on Saturday, Nov. 17, from 6 to 9 p.m., and continue Sunday from noon to 5 p.m. The hours will be sporadic after that; call 845-416-1427 for an appointment. 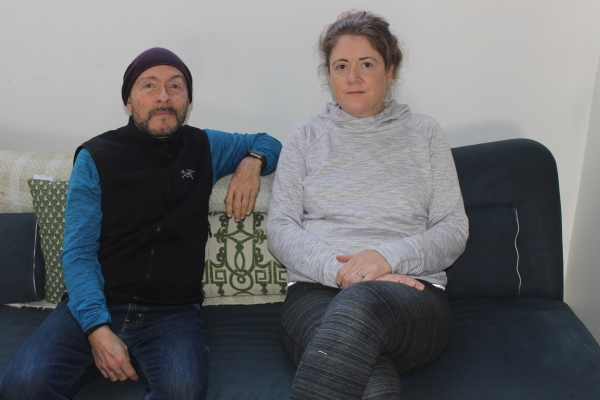 Richard Bruce and Kathy Feighery (Photo by A. Rooney)

Bruce and Feighery see their work as complementary. Both say they have been influenced by the beauty and experience of living in the Hudson Valley.

Bruce says his paintings in the show came largely from patterns he spotted in his garden. “I’ve done waterscapes and landscapes that had a beginning and end,” he explains. “This time I wanted to work with the paint in an immediate way. They’re still outdoors, just more abstracted. The paintings play off each other and create a dialogue.”

His technique, he says, is to use acrylic paint as if it were watercolor. This “wet-on-wet” process “brings in an element of chance. As the water evaporates and pulls from the pigment, the painting transforms repeatedly.”

Through her painting, Feighery says she hopes to create “a space for contemplation. Hopefully it allows a stopping and a quiet and a stillness — a moment in our chaotic world.” She says while painting she enjoys considering “how paint, light, and color convey a sense of an object. They can describe it but not necessarily recreate it.”

Bruce says he discovered the Highlands when he attended a workshop taught by Josephine Monter, who had a home at Manitou. The area reminded him of the West Virginia landscapes of his childhood. “We wound up driving around Cold Spring, and I was ready for a change,” he says.

Feighery, meanwhile, spent her childhood bouncing between Ireland and Putnam County. Soon after she settled in Cold Spring, someone mentioned a group show at Collaborative Concepts in Nelsonville. There she met one of the founders, Peter Clark, who “was leading a wave, gathering a collection of artists together,” she says. “He was very much a mentor, supportive and invested.”

She and Bruce met through mutual friends and both had studios at Collaborative Concepts after it moved to Beacon in 2001. “There were two studios in the back and the deal kind of was you would watch the gallery in exchange for the use of the studio,” Feighery recalls. They later shared space at other locales, including Beacon’s Bulldog Studios and at a repurposed former dairy in Peekskill (great light but freezing). Today, Bruce has a studio in Newburgh and Feighery works out of her home in Nelsonville.

Both artists have persisted despite the inconsistent art market. “You plug away,” Bruce says. “I’m at the best place I’ve been with my work.”

Adds Feighery: “You try to keep an even keel, but I have a 10-year-old, so I can’t do as much as I did. But painting is always there. I file away everything interesting I see. It’s your inventory; you’re always building from it.”