A fire in February 2002 that destroyed the Grand Union (now the site of Foodtown) left Philipstown residents without a supermarket and bereft of veggies and fruits. This stirred a group of community members to advocate  for a farmers market, which opened that summer across the street at the site of Butterfield Hospital and was an immediate success.

Open May through early November, the market moved twice, leaving Butterfield for the courtyard of The Nest next door and then landing in the parking lot at Boscobel, further south on Route 9D. In 2009 it expanded to 12 months, taking up residence at the Philipstown Recreation Center and, more recently, inside the Parish Hall at St. Mary’s Episcopal Church in Cold Spring.

This year’s winter market opened Nov. 10 and will continue each Saturday at St. Mary’s from 9:30 a.m. to 1:30 p.m. to April. It loses money but Susan Branagan, chair of the Cold Spring Farmers’ Market board, says that it’s important to provide continuity for shoppers and to support farmers. “Things are still growing, and still being harvested,” she notes. 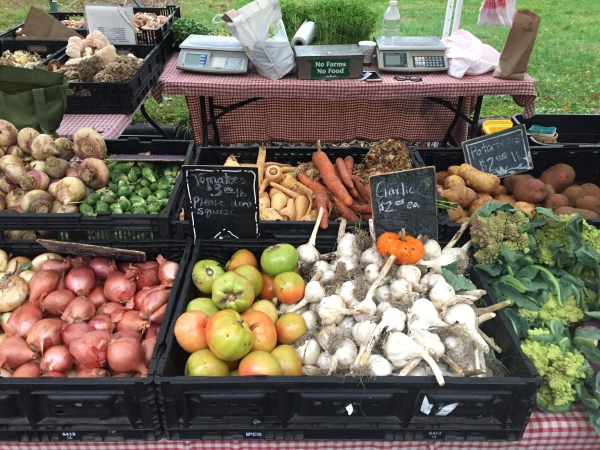 (In Beacon, the farmers market will be outdoors on Sunday, Nov. 18, next to the U.S. post office, then move on Dec. 2 inside the VFW Hall at the corner of Main Street and Teller Avenue, through April 28. The hours are 10 a.m. to 3 p.m.)

Cheryl Rogowski, whose Rogowski Farm is located in the black-dirt region of Warwick, began selling year-round at the Cold Spring market four years ago. She grew up on her family’s farm and is now on her own cultivating about 10 acres. For winter growing she uses a heated greenhouse and mini-tunnels. She says she appreciates the loyalty of her Philipstown customers and attributes the drop-off from the summer market to the change in venue and that “some folks don’t realize the market is year-round.”

These vendors are typically at the Cold Spring winter market each week:

Originally sponsored by the village, three years ago the CSFM became a nonprofit with a volunteer board and two part-time managers who earn salaries. It is supported by donations and fees the vendors pay to participate.

Tessa Dean, one of those managers (the other is Erika DaSilva), has been with the market for two years. She says sales are usually strong through Thanksgiving but taper off during the colder months, when “people don’t want to get out of bed. When the snow hits, our core vendors power through. Nobody is saying we should close it down; there’s just an acknowledgment that it’s rough at times.

“Behind the scenes, there’s the cost of insurance, accountants, rent,” she explains. “We focus on what is available and provide, for example, recipes in our weekly email, linking to what will be at the market and little things one might not know, like which potatoes hold their color. Most important, there’s still that personal connection to the vendor who grew the food.” 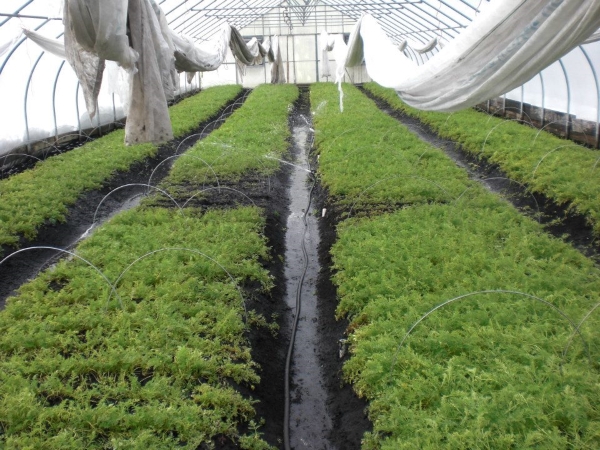 Farmers often use “high tunnels” to grow crops in the winter. (Photo by Cheryl Rogowski)

Setup in the winter is less work, she says. “There are no tents, fewer signs.” Plus, it’s “pretty toasty inside of St. Mary’s hall. Compare that to sweating or freezing outside! The challenges for the vendors are the travel and growing. But we have a nice camaraderie among the vendors and managers. What’s not to love about farming and food?”

As one of the first vendors to join the winter market, Madura Farm is a CSFM anchor. The farm sells at six markets in the summer and four in the winter, rotating among them, says Vivian Graziano, a manager at Madura and a familiar face to Cold Spring market-goers.

Madura, which is being farmed by the fourth generation of the family, at one time was 726 acres but has been divided, she says. “There are four brothers and all have their hand in farming, using different processes.” In preparation for winter farming, Dan Madura starts crops such as spinach, kale, arugula, chiso, beets and mesclun mix in a traditional greenhouse, before moving to high-dome tunnels. Mushrooms are grown year-round. 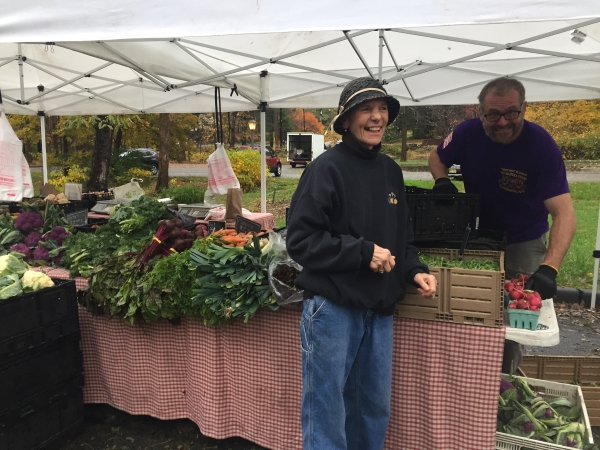 Vivian Graziano of Madura Farm (left) and her “helper for the day,” Ed Doty of Shawangunk Growers (Photo by Erika DaSilva)

She says Dan is always looking at new crops — right now it’s ginger and turmeric. “It’s about seeing something someone else is not doing,” she says.

Graziano says she enjoys the friendly confines of the Cold Spring winter market. “We help each other out — lending scales, picking up pieces that have dropped,” she says. Elsewhere, she says, “some markets are cut-throat” in part because of the increasing competition. “They’re popping up everywhere; there are several in Newburgh, plus there’s Pleasantville and Peekskill, Chappaqua, places that aren’t that far away,” she says. In addition, “grocery stores are trying to pick up what they’re calling ‘local’ produce, but frequently isn’t.”