It was an exceptional season for the Haldane High volleyball team, which won a league championship, advanced to the Section 1 championship for the third straight year, and had five players receive post-season honors.

“Our schedule was tough, and they played well against good teams,” said Coach Kelsey Flaherty. “It didn’t end the way we wanted it to [with a defeat to Valhalla in the Section 1 championship], but we can’t look at one loss and let that define the season.”

Haldane met a strong (and undefeated) Valhalla on Nov. 3 and lost in four sets, finishing their season at 19-4. 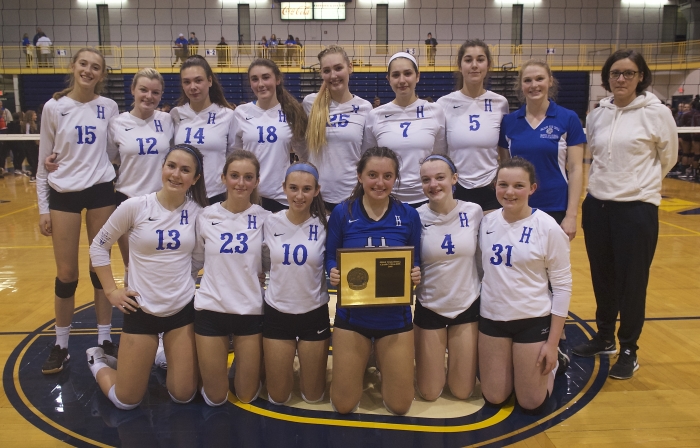 Senior Willa Fitzgerald and junior Melissa Rodino were both named to the All-Section, All-Conference and All-League teams.

“Willa and Melissa were our go-to players for offense,” Flaherty said. “Olivia started for us last year, and this year she stepped up for us as libero. Morgan is a smart player, always thinking about what’s next, and Grace is a power hitter, and was great on offense and defense.”

Flaherty also praised the efforts of two other underclassmen, junior Sofia Viggiano (“She really proved yourself”) and sophomore Maria Barry (“Without her energy and poise on the court, our dynamic  wouldn’t have been what it was”).

With only Fitzerald and Etta graduating, the team should continue to be competitive next year.

“We will have seven seniors next year,” Flaherty said. “We have a lot of talent back.”