After all the work that went into making that spectacular Thanksgiving feast, “leftovers” is such a sad and inadequate word to describe the remains of the mountains of honored family comfort foods that usually make up a fine celebratory repast.

Yet there’s something to be said — and secret pleasure to be had — from surreptitiously sneaking forkfuls of your favorite straight from the fridge, or even layering slabs of bread with turkey, stuffing and cranberry sauce in a slightly less feral attempt at civility. Keeping it simple, as it were.

But despite the days of dedicated scullery leading up to the main event, re-animating a holiday dinner’s “many wonders” (the late David Foster Wallace’s choice euphemism for said leftovers) usually leads a culinary obsessive (such as your humble correspondent) to energy-intensive solutions like a comparatively simple turkey-okra gumbo on the homey end or to a simple-sounding turkey enchilada that became primarily an excuse to replicate an authentic but incredibly intricate 21-ingredient Oaxacan mole negro. Never again.

Let’s face it: life in America — make that the world — is complicated enough these days. Simpler solutions are in order.

A quesadilla recipe remembered from chef Bobby Flay’s first big New York City restaurant, Mesa Grill, consisted of a simple two-level stack of flour tortillas layered with a revolving selection of seasonal protein and produce. It was baked in a hot oven rather than pan- or griddle-fried, and bound by oozy melted cheese. While not an absolutely authentic interpretation, that still seems a good strategy for approaching whatever’s left from holiday dinner. 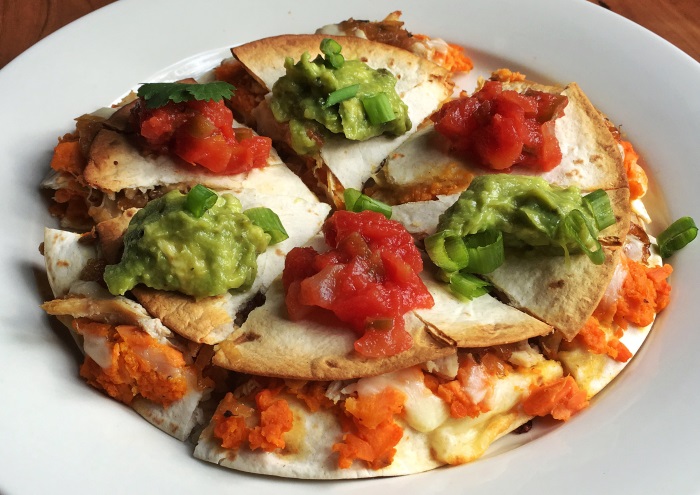 The version presented here marries turkey and what was left of a sweet potato casserole. The only new item is a bit of quickly caramelized onions, brightened a bit with some fresh lime juice. The flour tortillas are traditional for quesadillas, but baking them adds a bit of crunch, which contrasts nicely with the molten cheese. Traditionally, queso Oaxaca, a stringy Mexican cheese, is used but shredded mozzarella (perhaps supplemented by a more assertive cheddar or Jack cheese) is a readily available substitute. Even string cheese will work. Garnishes or toppings are flexible, but don’t make yourself crazy.

This reincarnated Thanksgiving meal — Reincarnitas! — could even go vegetarian. Those same sweet potatoes could easily be topped by your leftover Brussels sprouts: just be a bit sensitive to texture. If the potatoes are too chunky, mash them a bit to make a better base layer. The turkey should be either shredded or chopped into bite-sized bits for even distribution. And if you do use Brussels sprouts or some other vegetable, chop them roughly to avoid large chunks. You might even consider a version substituting leftover stuffing for the potatoes and cranberry sauce (particularly if it’s fashioned from whole cranberries and inclines toward the savory rather than the sweet) for the onions.

It may not be authentic but neither is it some culinary Frankenstein monster. With a little consideration you can re-animate whatever remains you have on hand.

(if lumpy, mash a bit for a smoother consistency)