Regulation would apply only to chain restaurants

The Putnam County Legislature is expected to vote at its monthly meeting on Tuesday, Dec. 4, on a measure that would prevent chain restaurants from using disposable containers made of polystyrene foam. But it is unclear if the ban has enough support to pass.

The proposed law, which would regulate items such as plastic bowls, plates, cups, cartons and trays designed for one-time use — would only apply to restaurants with 15 or more locations nationally.

Albany County passed a similar law in 2013 and New York City as of Jan. 1 will ban polystyrene foodware and foam packaging peanuts, although small businesses and nonprofits may apply for exemptions.

The Putnam proposal has been championed for years by Barbara Scuccimarra (R-Philipstown), who chairs the Legislature’s health committee and would like to see the measure become law before she leaves office this month after losing in the Nov. 6 election. The committee voted 2-1 on Nov. 14 to send the measure to the full Legislature. 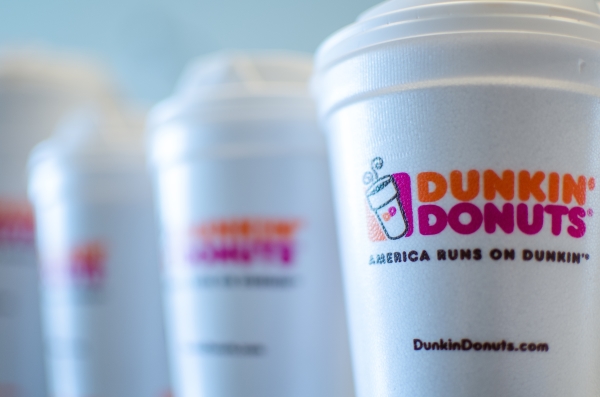 Under a proposed law, chain restaurants in Putnam County, including Dunkin’ Donuts in Cold Spring, would no longer be able to use foam plastic cups. (Flickr)

“We have talked ad nauseum about polystyrene and the effect it has on our environment,” Scuccimarra said during a discussion at the Nov. 14 committee meeting. “It doesn’t break down, but breaks up and stays in the environment for hundreds of years. These are just carcinogens that are not healthy.”

She said the ban would move the county a step closer to significantly reducing single-use plastics.

“That’s our goal,” said Scuccimarra. “Unfortunately, I’m not going to be here to push a plastic-bag ban. I hope someone will take charge of that.”

Ginny Nacerino (R-Patterson) suggested that enough lead time be given to allow corporations to use any stock on hand. “If this would put an undue burden on them, that’s not what we want to do,” she said.

Paul Jonke (R-Southeast) said he’s not comfortable moving forward without hearing feedback from local franchise owners. “Does Dunkin’ Donuts have a paper alternative for a 16-ounce cup?” he asked. “I’d like to hear from these people. We owe it to them to find out if they can do it.”

Amy Sayegh (R-Mahopac Falls) expressed reservations about a ban that might lead to other bans. “The next thing that’s going to happen is we’re going to ban the covering on the paper cups that they’re using for the ice cream cups instead of the polystyrene,” she said. “Then we’re going to say, ‘OK, you can’t use plastic bags.’ I mean, we’re just taking over the whole packaging materials” enterprise.

Styrofoam: The trademarked name for closed-cell extruded polystyrene (XPS), which is made by Dow Chemical and used for insulation and in crafts.

“We’re taking it over for a reason,” Scuccimarra replied. “Because it’s polluting Putnam County, it’s polluting our environment, and these are things we’re now realizing are a detriment. This is the way you should go. And some people might need a little push to go into that direction. But calling all these organizations to come in here and talk — this will never get passed.”

She pointed out that Putnam’s government stopped using polystyrene two years ago, and that the county’s interim health commissioner, Dr. Michael Nesheiwat, said his agency could handle enforcement.

She also proposed giving businesses fair warning by delaying the law from going into effect for six months. “We’ll tell them, … ‘get ready for it, it’s coming.’ I’m sure some companies are already thinking about this.”

One thought on “Foam Plastic Ban Goes to Putnam Legislature”