Philipstown’s Town Board has revived plans to change the zoning code to allow galleries and museums in the office-commercial district, which includes Magazzino Italian Art, the inspiration for the initiative.

The board released a draft zoning revision on Nov. 7 and scheduled a public hearing for 7:15 p.m. on Thursday, Dec. 6, before its monthly meeting at Town Hall.

Although it does not mention Magazzino, the measure specifically affects the 20th-century Italian art showcase, owned by Giorgio Spanu and Nancy Olnick of Garrison and housed in a former factory on Route 9 near the intersection with Route 301. 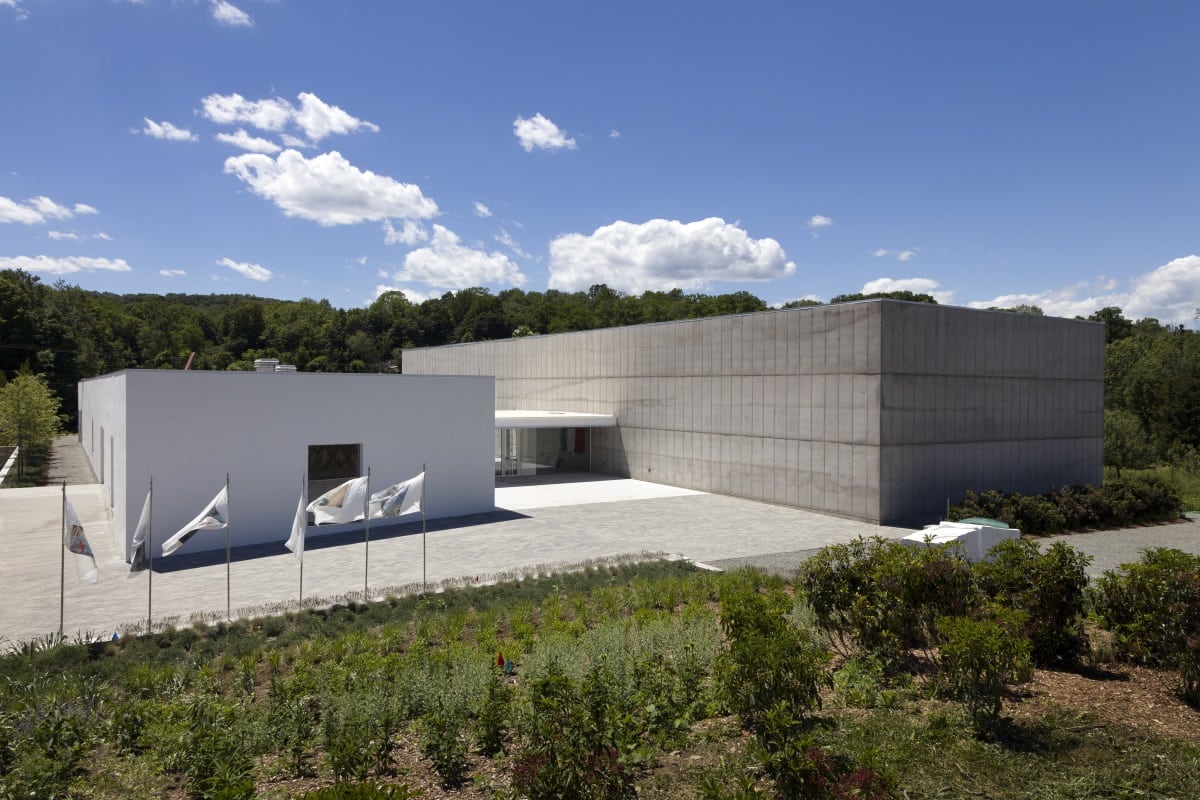 Philipstown Supervisor Richard Shea proposed the rezoning measure last March and the board further discussed it in June, before pulling back to tinker with its draft. The existing code does not include galleries and museums among acceptable facilities in the office-commercial zone.

The new law would change that. Moreover, it states that both museums and art galleries can be “open to the public or for private use and enjoyment.”

Town Board members expressed the belief the revision would allow Magazzino to operate more flexibly. “Currently, they’re under a restriction where you have to have an appointment to go visit. It’s just silly,” Shea said on Nov. 7.

However, unbeknownst to the board, in September Magazzino dropped its reservation system in favor of set hours, handed operations to a newly created nonprofit, the Magazzino Italian Art Foundation, and recast itself as a museum. (Under state law, an entity cannot call itself a museum unless it is also a nonprofit.)

A view inside Magazzino (Photo by Marco Anelli)

In emails this week, Spanu and Olnick said their for-profit company, Olspan LLC, still owns the building and land and pays property taxes but leases the building to the foundation, which they fund and established “to run Magazzino as a museum space and to handle related art and cultural philanthropic activities.” The foundation has applied with the IRS for tax-exempt status, they said. If the IRS grants it, “the foundation will be exempt from federal income tax,” they stated. “However, because the foundation does not generate any income, there will be none to pay.”

According to the 2018 Philipstown tax roll, the 6-acre property has a market value of about $2 million. It pays about $35,000 in annual property taxes that are split among the Haldane school district, Philipstown and Putnam County.

When Magazzino opened in June 2017 to house the Spanu-Olnick collection, its representatives insisted on calling it an “art space,” not a museum. After the Town Board began considering the zoning change last March, Spanu and Olnick wrote in a letter to The Current that they had “never implied that Magazzino is a museum, nor that we would like to obtain museum status.”

At the time, they referred to Magazzino as “a private initiative that seeks ways to give back to the community, both culturally and financially. Thus, we have elected to pay all the taxes required by federal, state and local laws, rather than have the option to avoid these taxes by becoming a nonprofit museum.”

This week, the couple said they established a museum after all because “we have been wonderfully surprised by the public response” to Magazzino and because they want to make it “more accessible to the public, so we would not be forced to turn away those who came to visit but did not make a reservation.”

How to Visit Magazzino

Magazzino Italian Art specializes in works of the contemporary Arte Povera (“poor art”) movement. Located at 2700 Route 9 in Philipstown, it is open from 11 a.m. to 5 p.m. daily, except for Tuesday and Wednesday. Admission is free. It also offers a free shuttle bus from the Cold Spring train station.

On Saturday, Dec. 1, at 3:30 p.m., Magazzino will present a conversation with Philip Larratt-Smith, author of a new monograph on the artist Jannis Kounellis, and Francesco Guzzetti, Magazzino’s newly appointed scholar-in-residence, on Kounellis’ work and influence. Art historian Bruno Corà will also speak from Italy. RSVP to [email protected]

On Friday, Dec. 14, at 7 p.m., Magazzino will host an hour-long concert of classic and avante-garde Italian songs curated by Garrison native Nicholas Tamagna. Tickets are $15 at magazzino.art.

Along with exhibiting art, Magazzino hosts talks, movies and concerts, and the couple expressed hope the change would enable it to “foster the ongoing growth of our community programs as well as the research we support that contributes to the greater art world.”

On Nov. 7, Shea and Town Board Member Nancy Montgomery praised Spanu and Olnick for their public-spiritedness. “I’ve said it numerous times: I couldn’t have imagined a better outcome for that [former industrial] space,” said Shea. “We have this incredible resource bringing people from all over the world,” who often patronize local businesses. Moreover, he said, “they’re paying full taxes; there’s no break there.”

“They just never set out to be a not-for-profit,” Montgomery remarked. “They pay taxes and offer this great space to the community.”

In a follow-up on Wednesday, Montgomery said she was unaware that Magazzino had become a nonprofit or a museum. But she said “Magazzino continues to pay full property tax. They have not filed for any exemptions.”

HOW WE REPORT
The Current is a member of The Trust Project, a consortium of news outlets that has adopted standards to allow readers to more easily assess the credibility of their journalism. Our best practices, including our verification and correction policies, can be accessed here. Have a comment? A news tip? Spot an error? Email [email protected]landscurrent.org.