There’ll be more than one singular sensation onstage in Beacon on Friday, Dec. 7 — there will be 21, if you count everyone in the cast of A Chorus Line, the high school’s fall musical.

They will join to form a cohesive group — of individuals. That’s at the crux of the groundbreaking musical, which asks each member of a chorus line to step forward and tell her or his story.

Anthony Scarrone, who directs the Beacon Players, says the young actors have become “very much like a family. When A Chorus Line begins, they are all ‘one,’ then the director breaks them down, and then they become one again at the end. That’s what it’s been like for all of us bringing the show to life.”

The cast raises its hats (Photo by Tony Cenicola)

The bare-stage production, which won 12 Tony Awards and the Pulitzer Prize for Drama the year after its 1975 Broadway debut, was developed through workshop sessions with theater dancers, whose personal histories evolved into characters.

Scarrone says the Beacon High School production has been calmer than most that he has directed.

“I think it’s because I’m not dealing with major set pieces,” he says. “But also, the kids truly feel engaged, because it’s like a replica of an audition, and that’s something they can relate to.” 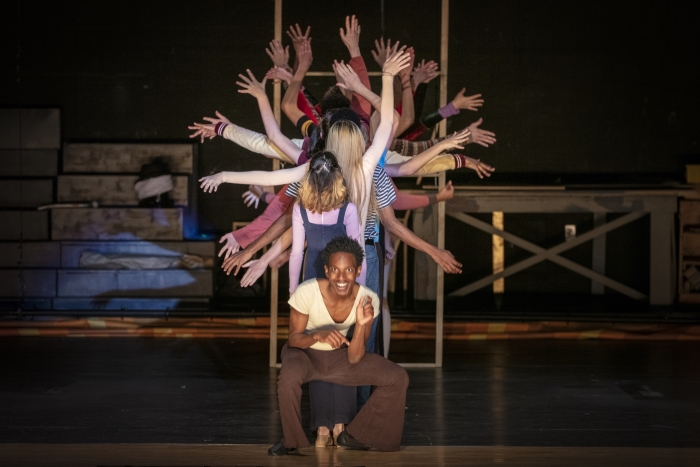 He says the major challenges have been the choreography (“We have runners from the track team doing jetées!”) and, to some extent, the maturity of the material. “It’s set in 1975 and the mores were different,” he says.

Two students volunteered to oversee the choreography but, just as production began, Scarrone received an email from David Bethards, whose son, Devin, plays the character Bobby Mills. Bethards was moving from Florida to the Highlands and asked if he could help in any way. He mentioned, almost as an aside, that he had played half the male characters, including Bobby, in a national tour. The two students were thrilled, Scarrone said, to assist someone who knows the original Michael Bennett choreography.

David Bethards says it’s been a wonderful challenge to teach the complicated material to the students, most of whom had never had a dance lesson. 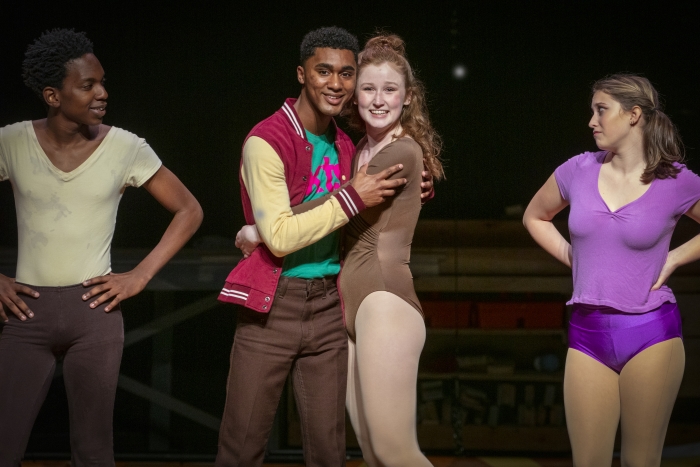 “The kids have been open-minded and I believe unaware of how difficult an undertaking this production is for non-dancers,” he says. “I give them the same notes that I would give to professionals. While there are moments when it is clear that a step or combination is too difficult, in considering their age and background, they are doing an admirable job.”

Devin Bethard said he had never watched his father work as a choreographer. “It’s something I wish I had the chance to do sooner,” he says. “It’s been incredible learning about the show from my father, seeing how passionate he is about it.” David Bethard says Bobby Mills was his favorite role, which Devin says has made the Beacon production “an even better experience. Hearing that I do the part justice from someone who loves the show so much feels beyond encouraging.”

A Chorus Line will be performed at the Seeger Theater at Beacon High School on Friday, Dec. 7, and Saturday, Dec. 8, at 7:30 p.m. and on Sunday, Dec. 9, at 2 p.m. Tickets are $12 for adults or $5 for students and seniors at beaconplayers.com or, if available, at the door.