Letting go of what you love

There is nothing like that first time you climb Breakneck Ridge: The way the undertaking looks impossible when you stand at the bottom and crane your neck; the first vertical patch where you get the sensation that you shouldn’t be doing this; the moment you realize it’s easier to keep going than to turn back; and the rush of empowerment when you reach the top, with the Hudson churning around Bannerman’s Castle beneath you, West Point shimmering to the south and a long silver train gliding north.

If it’s a weekend, that train is bringing company. Breakneck has always been a popular hike, thanks to having its own Metro-North stop and its reputation for danger. But the number of visitors has surged to more than 100,000 annually, which has prompted the New York-New Jersey Trail Conference to hire trail stewards on weekends for a multitude of tasks that include asking many of those 100,000 hikers what they’re doing here all of a sudden.

According to the Trail Conference, the main reason people say they visit Breakneck is because they heard about it through “word-of-mouth,” which, of course, means they found it online. No one learns about Breakneck anymore around a roaring campfire or from a grizzled backwoods sage at a local watering hole. They see it on Instagram. And now here they are.

A view from Breakneck (Photo by B. Cronin)

“I love the idea of lots of people going outdoors and exploring nature,” he says. “If we can create a situation that allows them to do that safely, without damaging the natural resources, that’s a win-win.”

With that in mind, the Trail Conference, working with New York State, the outdoors equipment retailer REI and other stakeholders, reached out to the Leave No Trace Center for Outdoor Ethics in Colorado. The center this year designated Breakneck as a “hot spot,” which led to me standing at the trailhead a few weeks ago on a blustery Saturday afternoon with Jessie Johnson and Matt Schneider.

Johnson and Schneider live on the road, traveling the country for the Leave No Trace Center to teach hikers to minimize their impact. There are 18 hot spots, including Breakneck, and next year there will be 20, including the High Peaks region of the Adirondacks.

“Unlike some of the other places we visit,” says Schneider, “you’re ahead of the curve.” 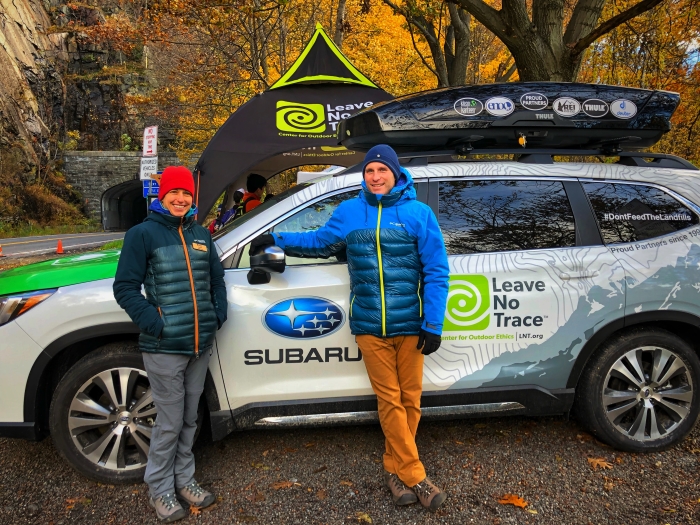 Jessie Johnson and Matt Schneider of the Leave No Trace Center for Outdoor Ethics, at Breakneck Ridge. (Photo by B. Cronin)

Sometimes, taking action to save the environment isn’t about marches or chaining yourself (or a friend) to a bulldozer. It’s about standing outside in freezing weather for hours on a Saturday to hand out maps while explaining that flip-flops and intoxication will not make for a safe hike.

Everyone I spoke to guessed that Leave No Trace would recommend expanding the trail stewards program to include points along the trail and aboard the Metro-North car that opens at the Breakneck platform. Johnson and Schneider suggested Breakneck might qualify as a “gold standard” site that becomes an example of how not to love a place to death.

“Loved to death” is a phrase that kept coming up when I visited Blue Hole in the Catskills, itself once a Leave No Trace hot spot. Love is what I keep coming back to when thinking about the Trail Conference, Leave No Trace, the Hudson Highlands Land Trust and everyone else who is putting in the work to save Breakneck — as well as the locals who have been taking care of it for decades, starting long before there was anyone watching.

But I have to say, I love the swarms. Not every visitor has been respectful, and summer weekends can feel like an invasion. A lot of us have abandoned Breakneck, leaving it to the tourists, which can be heartbreaking. But no one falls in love with the outdoors without experiencing it, and no one will fight for something they do not love. Breakneck’s accessibility by train makes it one of the few wild places that city dwellers can reach without a car, which can lead to a lifelong relationship with the land, the views and the Hudson that turns day trippers into activists.