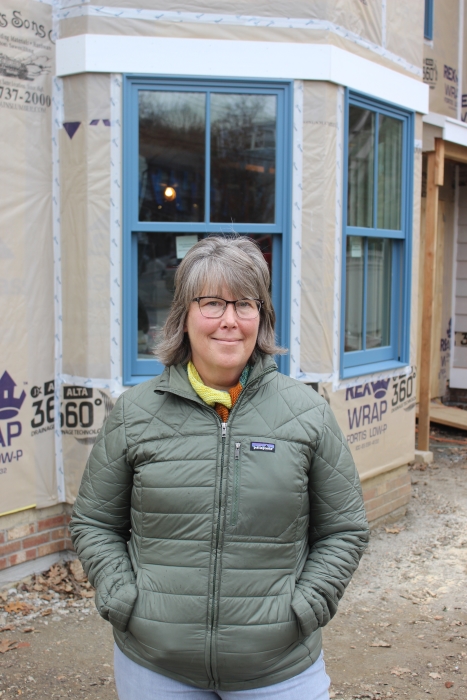 Sue Costigan (Photo by A. Rooney)

Sue Costigan, who lives in Nelsonville, co-owns the property at 126 Main St. in Cold Spring, the former site of Carolyn’s Flower Shoppe.

What’s being built on the site?

It’s going to be Endless Skein, my yarn shop for knitters and crocheters, which I’m optimistic will be open in May. It may grow into having supplies for weavers and felters, but I’ll start with what I know well, make every mistake in the book for the first couple of years, and take it from there.

Knitting seems to be undergoing a resurgence. Why is that?

One theory is that the extensive technology in our lives make us want to do something with our hands. But technology has also fostered a community of people interested in making things. Knitting and crocheting are timeless and appeal to older generations, but there’s also a younger, cooler group and many people who want to learn, so we’ll have classes. It’s just two stitches. I’m very slow with physical things, and I learned.

Which was easier: Raising six children, or birthing a business?

[Pauses.] It’s apples to oranges. Getting the building built has been far more involved than I expected it to be. I didn’t understand the goals of the [Cold Spring] Historic District Review board, but I’ve learned a lot. Because of the construction, the yarn business has been on the back burner, and I’m ready to put my focus on that. The construction has allowed me time to learn more about running a business. I took a semester-long class through the Women’s Economic Development Center. I’ve also taken courses specific to this industry at the TNNA [The National Needlearts Association] trade show.

How did this begin?

My youngest child will be finished with college soon. I know you’re not supposed to use your hobby as a business idea, but I wanted to open a yarn store. I was sitting in Hudson Hil’s when I saw the sign that said Carolyn’s was for sale. I thought it would be the perfect place for a store. My husband and I agreed it would be costly, but it’s an investment, too. There’s an apartment on the second floor, but we’re not going to be landlords yet. It’s the parking lot that gets people excited!

What do you know of the history of the original building?
It was constructed between 1860 and 1880. It was a bakery, then a bread store. For a while there were a bunch of buildings along the length of the property, but they disappeared. It became an attorney’s office. I believe Carolyn’s father bought it in the 1970s. We hoped to add a small addition, but once in, my husband, who builds houses, said, “It has to come down.” We bought the property in 2016 and spent a year working through the process. The demolition was done in March. We had a restoration architect document everything, and certain resources will go to the Putnam History Museum. We have 8-inch clapboard siding — it’s probably what the original exterior looked like. We salvaged a lot. We took brackets off the front and saved some interior doors, some of which were possibly originals. We also have the interior brackets from the bay windows. My husband poured the foundation and one of my kids is in the crew. Karen Parks, my architect and designer, and Garrison Woods, which did the demolition and is working on the reconstruction, have been great. People have been very nice. And our seven neighbors have been very patient.