Homeland Towers and its partner Verizon, who planned to build the cell tower on a hillside off Vineyard Road, near Route 9, sued Philipstown in federal court in February after the town denied their application.

The two sides negotiated a settlement and, this fall, appeared to reach a compromise: The town would allow a 190-foot tower (10 feet higher than first proposed) on the same private property but in a different location, closer to Route 9. Further, Homeland Towers would construct a second tower on rented space at the town highway garage instead of on a ridge in Nelsonville overlooking the Cold Spring Cemetery — conceivably ending a separate Homeland lawsuit against Nelsonville, which refused to allow a tower on the ridge. 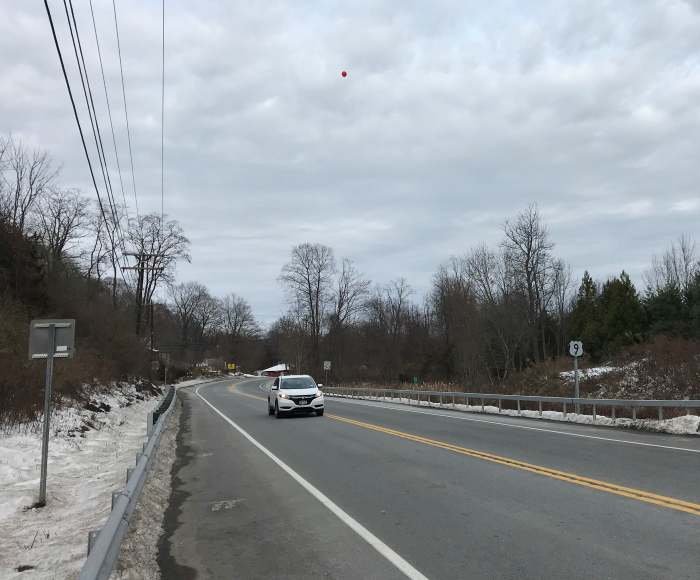 In a photo provided by a resident, a red test balloon shows the approximate height of the proposed cell tower (190 feet) looking north on Route 9 opposite the entrance to Magazzino.

A balloon test of the proposed Vineyard Road site in late November to demonstrate the tower’s height killed the potential deal, Shea said Thursday. It convinced the Town Board that the relocated Philipstown tower “was not the way to go,” he said. “It’s grotesque. The need for this just has not been proven” and town officials want that need established “before we go having this 190-foot tower as our welcome mat to Philipstown.

“It feels like these things are going to be obsolete in the very near future,” Shea added. (Some newer technologies do not rely on large towers.) “In my mind, the tower companies are scrambling to make money at our expense.”

Homeland Towers blamed the town for thwarting a settlement.

In a letter written the day after the board met, Robert Gaudioso, Homeland’s attorney, protested to Judge Vincent Briccetti, one of the federal jurists overseeing the case, that “after dragging out settlement discussions for over eight months and demanding another balloon test, other evidence, and alternative” proposals, town officials, “without explanation, declined to settle the matter, completely contrary to” their earlier stance.

The out-of-court proceedings have also involved about a dozen residents who live near the proposed Route 9 tower. In June, the group petitioned the court to be allowed to intervene in the case. Gaudioso objected, asserting they sought to raise “issues which will unnecessarily delay and complicate the litigation.”

The town’s attorney, Terry Rice, drafted a letter to the judge to support the residents, but, by his own admission, never sent it — prompting the residents to complain that he, too, was rebuffing them and overlooking Shea’s instructions to include them in the case.

Rice, who was assigned to the suit by Philipstown’s insurers, told Judge Briccetti on Dec. 6 that he had held off involving the residents while settlement talks continued. “Now that those negotiations have failed to produce a resolution,” he endorsed the residents’ intervention and said it could help resolve the conflict.

One thought on “Balloon Test a Bust for Cell Tower”