K9 officer will save hours of search time, says sheriff

The Dec. 4 decision allows Putnam to join an elite group. 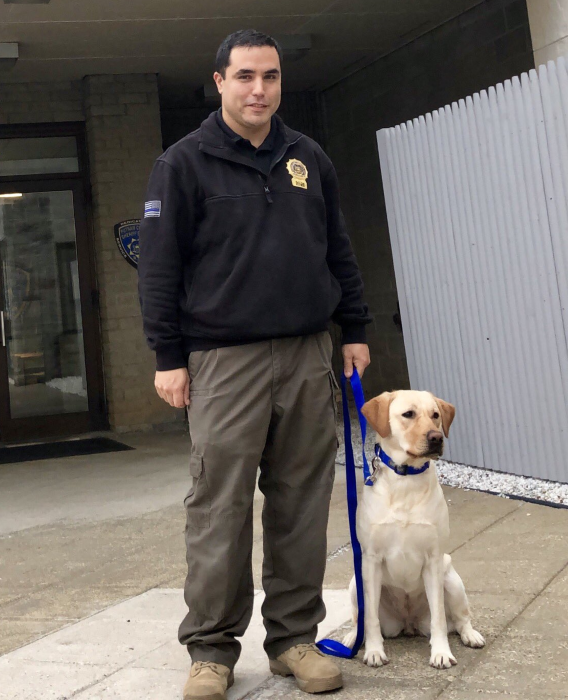 Sheriff Robert Langley told the Legislature’s Audit-Administration Committee on Oct. 29 that relatively few law enforcement agencies own such a K9 (the dogs more commonly detect drugs or bombs, or do tracking). Westchester County has an electronics dog but it mostly is used by the FBI in New York City, Langley said.

Connecticut trained the first electronics-savvy dogs in 2012. Now, dozens with names such as Bear and Brody but also URL, Cache, Browser and Queue work around the country.

“A dog can go into a home where there’s suspected child pornography” and in “an utter disaster of a room sniff out” a small electronic device, said Amy Sayegh (R-Mahopac).

“It’s a great thing,” added Joseph Castellano (R-Southeast). “There will be taxpayer savings in the fact that man-hours will be saved by having this canine.”

Toni Addonizio (R-Kent) said “we need to be pioneers,” open to innovative ways of combating crime.

But the Legislature hadn’t always sounded so enthusiastic.

After Joseph and Monika Stilwell of Patterson wrote the check on Sept. 11 (the anniversary of the 2001 terrorist attacks) to purchase the dog, nearly three months passed before the Legislature accepted the contribution and amended the Sheriff’s Department budget to include it — a seemingly pro forma step.

(The Stilwells last year donated about $120,000 for the Sheriff’s Office to purchase two drug dogs, Lex and Kato, as well as two Ford Explorers to transport them.)

While expressing willingness to add a seventh member to the county’s canine corps, legislators wanted more information and said they had concerns about long-term costs. “Does the expense justify the need?” Ginny Nacerino (R-Patterson) asked at the Oct. 29 committee meeting. 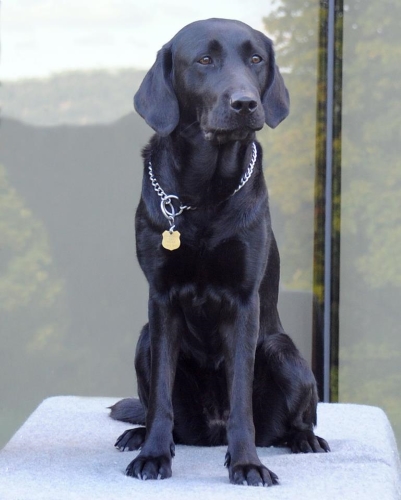 In 2012, the Connecticut State Police approached Jack Hubball, a chemist in the force’s forensic lab, to see if computer drives had a distinct smell that a dog could identify.

Hubball looked to the circuit board, found in every type of storage device, and discovered all contain a compound called triphenylphosphine oxide (TPPO) that keeps them from getting too hot. Similarly, every CD, DVD and floppy disk has a compound called hydroxycyclohexyl phenyl ketone (HPK).

Connecticut troopers began training two Labradors, Selma and Thoreau, who had been rejected as seeing eye dogs, to recognize TPPO and HPK.

“This program has absolutely turned up evidence that would have been missed or overlooked,” the detective who handles Selma told TechRepublic.com. “If a device is hidden in a drawer, under a table, in a vent, in a wall, the dog picks up on it.”

In 2016 the state police introduced Selma and Thoreau to the public and began training more dogs. Its first five graduates went to local departments in Alaska, Missouri and Virginia, the Massachusetts State Police and the FBI.

“You pay officers for hours and hours of time” to conduct a blind search that a dog can complete in 15 minutes, Langley said. “We are handling more and more crimes against children done over the internet,” including highly sensitive cases in collaboration with the federal Department of Homeland Security. He observed that frequently a child’s online interaction can lead to a physical encounter with a pedophile.

Will work for food

“We need to ensure we have the most up-to-date methods of taking pedophiles off the streets and keeping them off,” he said. “These children are being victimized not once, not twice, but thousands upon thousands of times when pedophiles put this stuff out, uploading it onto the internet. If we just put one person away, that dog has paid for itself.”

The Legislature put approval of the dog on the agenda for its next formal meeting, on Nov. 7. However, at that meeting, legislators postponed a vote and instead asked to confer with Langley privately about the dog and the department’s partnership with Homeland Security.

That private talk occurred on Nov. 19 at the Protective Services Committee. Subsequently, the committee endorsed the dog acquisition, clearing the way for the Dec. 4 vote. The dog purchased by the Putnam Sheriff, named Hannah, is scheduled to undergo three months of training with the Connecticut State Police starting in January.