We have the Romans, borrowing kitchen skills from the Greeks, to thank for the alchemy of egg-and-milk-based wonders known as custard, or flan.

We have the French to thank for crème and crème caramel, the haute version of custard in which caramelized sugar is poured into an uncooked, sweetened, vanilla-flavored base.

Crème caramel is sometimes cooked stovetop but more often it’s prepared in the oven. It additionally usually calls for a water bath — the partial submersion of the cooking pan in another pan partially filled with hot water. This is a culinary fail-safe as the process can be a delicate operation: temperature fluctuations of just 5 to 10 degrees can lead to curdling. (The water bath slows heat transfer and makes it easier to control the process.)

The objective is to obtain smooth-but-set cream custard with a liquid caramel base. Once the custard is set and cooled, it is inverted onto a serving plate and the caramel sauce, now on top, spills down the sides, hence the alternate French name, crème caramel renversée. Flan is a French word used to describe the exact same dish. It was borrowed from Spain. 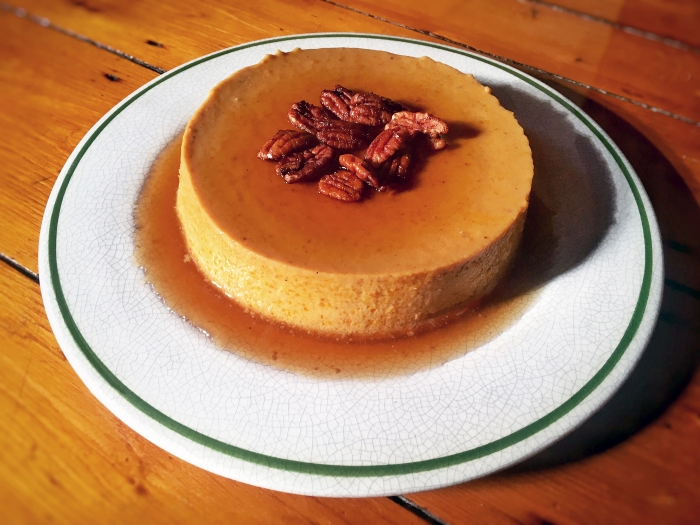 This recipe, adapted from the Barefoot Contessa, Ina Garten, uses sweetened condensed milk and evaporated milk, meaning you don’t have to use sugar (the caramel sauce supplies plenty) or heavy cream (which she replaces with mascarpone).

For this version, maple syrup adds a Northeastern accent and the canned pumpkin puree is superior for this recipe as it contains less water and fiber. Do not substitute canned pumpkin pie filling, which is sweetened and spiced. Spiced pecans are an optional but worthy holiday garnish (see the recipe, below).

For the pumpkin flan:

For the maple caramel:

Heat oven to 350 degrees. In a medium saucepan, warm oil over medium-low heat. Add dark brown sugar, water, five-spice powder and black pepper. Stir until sugar dissolves and mixture bubbles. Add pecan halves and cook, stirring, until pecans are thickly coated (about 3 minutes). Spread pecans evenly on a parchment-lined baking sheet. Sprinkle salt over all and bake until fragrant and crisp (about 8 to 10 minutes.) Cool completely and store in an airtight container.