Program will begin within six months

The Beacon City Council voted unanimously on Monday (Dec. 17) to begin offering a municipal identification card within six months. With the vote, the city joined three other municipalities in the Hudson Valley (Poughkeepsie, Middletown and Kingston) and about two dozen across the country that offer IDs. 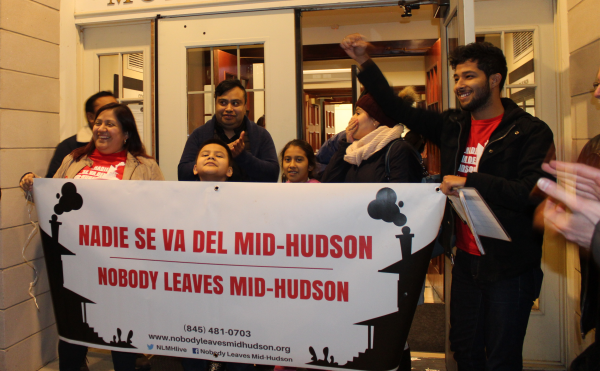 Members of Nobody Leaves Mid-Hudson celebrate at Beacon City Hall after the council created a municipal ID. (Photo provided)

The IDs had been championed by groups such as Nobody Leaves Mid-Hudson, which argued they would make it easier for individuals who typically have difficulties in obtaining government ID (such as undocumented immigrants, minors, the recently incarcerated, homeless, and transgender individuals) to participate in civic life, pick up children from school, retrieve prescriptions and interact with police officers.

The ID, which is voluntary, will cost $10, with discounted rates for minors, the elderly and those facing financial hardship. Applicants will need to provide a form of identification such as a passport, green card, consulate card or visa.

Although the law passed unanimously, Council Member George Mansfield said the city should spend the next six months making sure that businesses and institutions are prepared to accept the ID.

“I mean, I own a bar [Dogwood],” he said. “I want to make sure it’s OK if I start accepting these IDs as proof of drinking age.”