Beacon High School’s wrestlers dropped a 41-35 home match to a solid Brewster team on Dec. 20, falling to 7-4 on the season.

Because it lacks wrestlers at two weight classes, the team must forfeit the matches, which puts Beacon in a hole before its meets begin.

“Brewster is a very good team,” said Coach Ron Tompkins. “I thought for us to win, it would be close. But our problem is two forfeits. If we had won two close matches, we would have won the meet.” 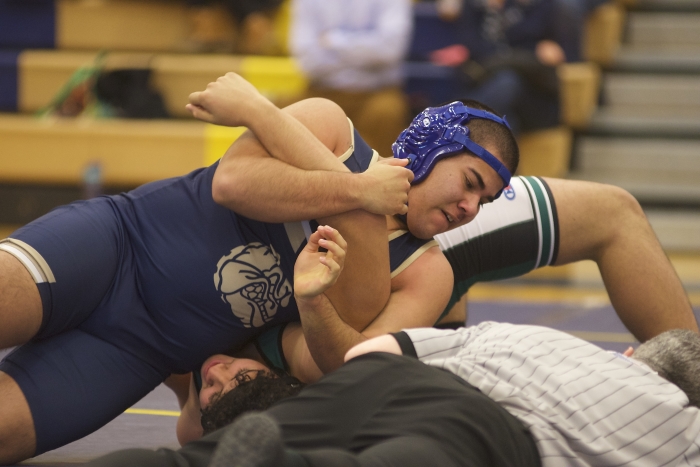 At 99 pounds, eighth-grader Chris Crawford won by pin to improve to 11-0. Tompkins predicted Crawford would do well at the 53rd Annual Mid-Hudson wrestling invitational scheduled for Dec. 27 and 28 at Arlington High School.

At 195 pounds, captain Dirani Haynes also pinned his opponent. “We needed a pin to stay in the match, and he came through,” Tompkins said.

Jeff Gutierrez evened his record at 5-5 with a pin at 220 pounds. “It’s his first year wrestling, but he works hard and picks it up fast,” Tompkins said. “He’ll challenge some good wrestlers.”

Junior captain George Pinkhardt improved his season record to 10-2 with a victory at 285 pounds. “He also came through with a big pin,” Tompkins said.

Tompkins says injuries have hampered the Bulldogs. “We have some kids missing,” he said. “Once we get everyone back, the team will be better.”