Five times each year, the members of Jenna Isabella and Ashley Linda’s journalism class at Haldane High School publish a school newspaper, The Blue Print. With support from the Haldane School Foundation, reporters and editors from The Current are working with the students to craft their stories and share their reporting with the community. Selections from the December issue appear below.

On the weekend of Nov. 2 to 4, eight Haldane High School students attended a Model UN Conference at the University of Connecticut. The conference was chaperoned by sixth-grade history teacher Mr. Sniffen and attended by Sophia Kottman, Joseph Carmicino, Damian Vladimiroff, Athena Stebe-Glorius, Andrew Nachamkin, Anneke Chan, Catriona Fee and Randall Chiera. This trip was made possible by a generous grant from the Haldane School Foundation.

The conference was a multi-day simulation of the various committees of the UN by hundreds of high school students from schools across the Northeast. In Model UN, individual students take on the role of a delegate from a specific country and represent the views and interests of that nation in a specific committee. 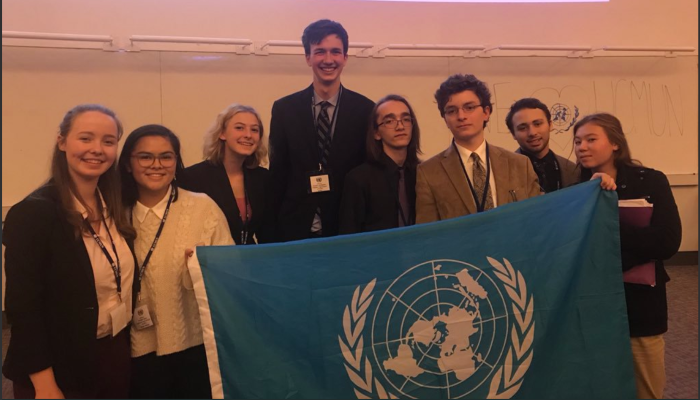 Haldane students took on various country and committee assignments, including India, Haiti and South Africa, on the UN Commission for Refugees, France on the UN Environmental Programme, Pakistan and Russia on the Committee on Crime Prevention and Criminal Justice, Israel on the Counter-Terrorism Committee, and on a special “alternate history” joint-crisis committee, Earl Henry Percy.

At the end of the conference, awards were given out for each committee for Most Improved Delegate and Best Delegate. This year, Haldane was fortunate enough to win two best delegate awards. Nachamkin, a junior, won for his representation of India on the UN High Commission for Refugees, and Fee for representing Israel on the Counter-Terrorism Committee.

The issues students debated in committee ranged from cyberterrorism to the Kashmir refugee crisis and nearly everything in between. In these committees, students (or delegates) debate these topics, work together to compromise and come up with a solution, which is enumerated in a working paper, which are then voted on by the entire committee to determine if it will pass to become a resolution.

These conferences are very engaging and provide an immersive opportunity for students to improve their research, public speaking, leadership and collaborative skills, among others. Vladimiroff, who represented Pakistan on the Committee for Crime Prevention and Criminal Justice, said: “I learned a lot about the diplomatic process and inner workings of the United Nations, and I was pushed to improve my work ethic and stamina in my committee.”

Model UN meets on Mondays during 10th period in Room 114, and new members are always welcome.

A Trip to the Movies with Liam & Riley

Marvel’s Avengers: Infinity War will surely go down as one of the best superhero movies of all time. It is a fantastic climax to the Avengers series and Part 2 is right around the corner. With more than 76 cast members in the film, it is an incredible feat that directors Anthony and Josh Russo were able to keep the movie clear and understandable.

The scenes in the movie are shot on an impressively large scale with dozens of characters fighting all at the same time. Standout performances include Robert Downey Jr. as Ironman, Chris Hemsworth as Thor, Chris Evans as Captain America and Josh Brolin as Thanos. 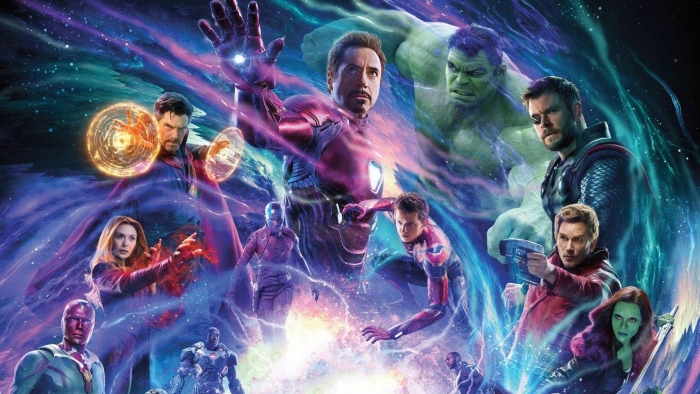 The film follows the battle between Thanos and the Avengers over the infinity stones — six magical stones with untold power. Thanos tries to obtain these stones with the goal of killing half of the universe and it is up to the Avengers to stop him. The plot of the movie is complex and there are about a dozen previous Avengers universe movies you should see beforehand to get a deep understanding of the complexity of each of the 70 characters.

Overall Avengers: Infinity War is one of my top films of the year; it has great elements of comedy, while staying dramatic as the heroes battle the seemingly undefeatable Thanos.

The newest blockbuster film from Disney came in the form of Solo: A Star Wars Story, the epic adventure of everyone’s favorite smuggler, Han Solo. Directed by Ron Howard and starring Alden Ehrenreich, Woody Harrelson, Emilia Clarke and Donald Glover, this film explores the origin story and the time Han spent prior to the events of Star Wars: A New Hope, giving this beloved character the backstory fans craved. 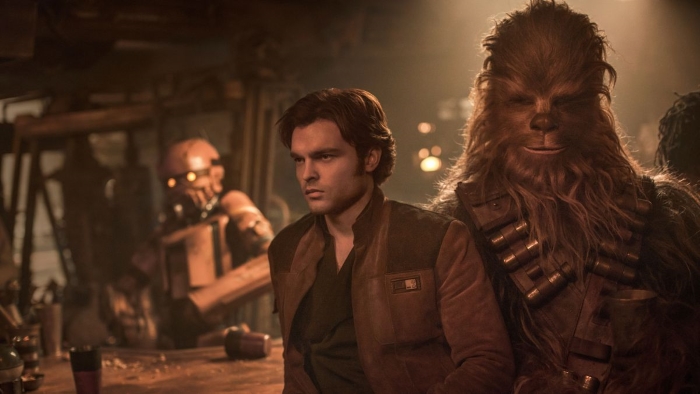 The film chronicles Solo’s escape from his home planet and his enlistment in the imperial military, including how he got his famous last name and met his faithful sidekick Chewbacca. Throughout his journey, we meet a collection of old and classic, as well as new and interesting characters, that help drive the story.

The drama department at Haldane High School is well-known for the variety of successful productions enjoyed by the community over the years. On Dec. 7 and 8, the cast and crew performed Shakespeare’s legendary work, Romeo & Juliet. Presenting a show of such caliber is no easy task and those involved spent months practicing lines, choreographing fights, and preparing sets in order to deliver an outstanding experience for the Haldane community.

The Romeo & Juliet cast and crew of more than 30 students was directed by Martha Mechalakos, and aided by parents and community members. Months of hard work paid off as the cast delivered their performance to an eager audience — tickets sold out for opening night. Though lengthy and delivered in the English of Shakespeare’s time, the actors delivered great performances throughout the entire play. 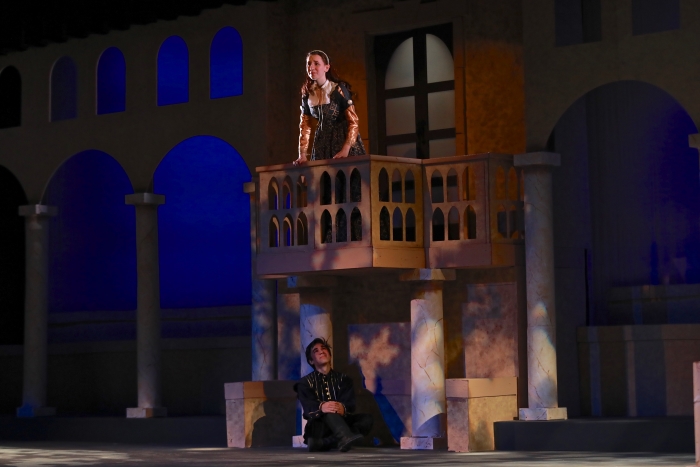 The show follows the infamous story of star-crossed lovers Romeo (Justin Roffman) and Juliet (Sasha Levy), as they play out their doomed romance amid an ancient family feud that divides Verona and threatens to keep them apart. The leads of the show played their roles in way that honored Shakespeare and conveyed the emotion of such a timeless classic.

Aside from the tragedy and romance, the nurse (Freya Wood-Gallagher) and Mercutio (Quinn Petkus), provided comic relief and entertainment and the actors often stole the scenes that they were in. Along with important characters like Friar Lawrence (Noah Bingham), Benvolio (Roisin Daly), Tybalt (Will Speziale), and a multitude of other characters (played by the rest of the talented cast), the tragic events of Romeo and Juliet’s love story play out in an unforgettable stage experience.

This show marked the end of an era for several seniors here at Haldane, including Randy Chiera, Daly, Eric Holmbo, Maja Maxwell, Reid Sandlund, Adam Silhavy, Speziale, Wood-Gallagher and Roffman, who all gave standout performances in their final play. The role of the lighting, sound, and stage crew is often overlooked and underappreciated but the job they performed made the show possible and allowed for a creative and entertaining evening for the audience. For those who wish to see more of Haldane drama, the community has the annual musical to look forward to in the spring.

I recently polled 111 Haldane High School students to gauge their reading interests. The wide range of responses did not reveal one single book as the most-read of 2018, but a majority of students enjoyed reading fiction books this year.

This year’s girls’ varsity soccer team participated in the state tournament in Cortland on Nov. 9. The students and faculty of Haldane cheered for their team as they sent them off with a high-energy ceremony before the girls got on the road. The inside of the bus was decorated with streamers, posters and photos of the girls playing soccer. After a five-hour bus ride, they arrived in Cortland. 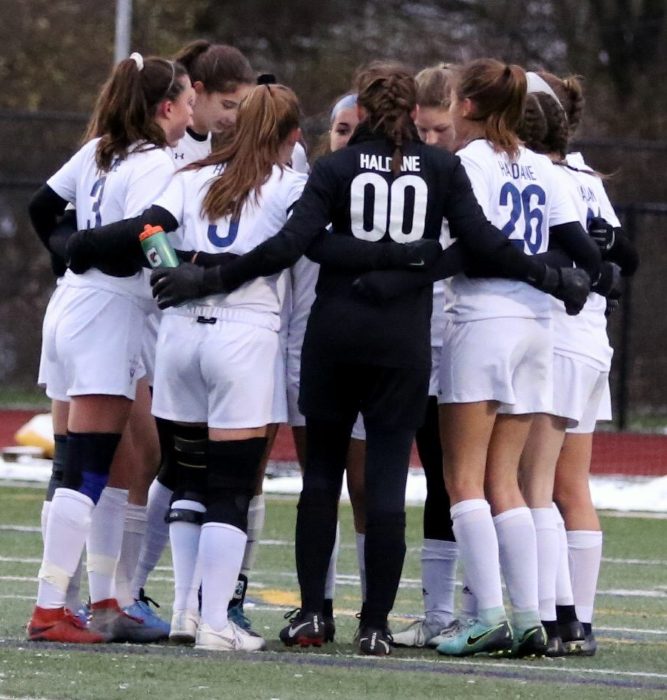 Members of the Haldane girls’ team huddled during their state semi-final game on Nov. 9.

The team attended a banquet and celebrated with the other teams competing in the tournament that weekend. Teams from each section of the state were present. A sketch was performed and a short speech was given by Haldane captain Julia Rotando. After the girls traveled back to the hotel, Clarion Inn, they spent the evening in preparation for the semi-final game the next day. The next morning the team went to a glow-in-the-dark mini golf course. Next, Haldane went to the Ithaca waterfalls and the morning ended with a team lunch at Applebee’s.

Their opponent, Stillwater, was undefeated with a record of 20-0-1. Haldane knew this wasn’t going to be easy but they went in wanting to win. Temperatures were below freezing and the snow was getting heavier as the game went on.

Stillwater came out strong and Haldane never backed down. The final result was Stillwater coming out on top with a 4-0 win.

“I am very proud of my teammates. It was a great season, I will never forget it. This was a great way to end my senior year,” said Katlyn Pidala. Kate Dwyer received the best sportsmanship award.