The Beacon Planning Board on Tuesday (Jan. 8) recommended that the City Council exercise caution, particularly with regard to scenic viewsheds, as it begins to consider applications for “small-cell” units and other types of wireless facilities.

The council last year adopted a law — Beacon was one of the first municipalities in New York State to do so — regulating the relatively new small-cell units, which are low-powered radio antennas typically placed on top of buildings or on utility poles rather than standalone high-rise towers. An attorney representing Verizon told the council last year that the units can boost wireless signals for 500 to 1,000 feet and are used to fill coverage gaps in high-traffic areas.

As applications for those units and other wireless structures trickle in — there are three on the table now — the council asked the Planning Board to review an older telecommunications law as well, to ensure that all of the city’s legislation is in sync.

A small-cell antenna in Newark (Verizon)

Together, the two laws strengthen the city’s ability to oversee the implementation of 5G and other technologies, said Planning Board Chair John Gunn.

There are two pending applications to place small-cell units in Beacon on existing utility poles at 2 Red Flynn Drive and 7 Cross St., both on the city’s west side. Those applications, submitted by Verizon, will go to the Planning Board for review.

The City Council is reviewing that request, and last month approved a Verizon proposal to add a rooftop antenna to equipment atop the Mase Hook and Ladder fire station on Main Street.

As more applications arrive, however, “it’s not going to be a pretty sight,” Planning Board member Gary Barrack predicted at the Tuesday meeting.

He said he had no problem with the legislation the board was reviewing but that he wasn’t so happy about cell towers in general. “It certainly will not enhance the look of the city or neighborhoods unless they were strategically placed in spaces where we wouldn’t see them,” Barrack said.

Even as cellphone use continues to grow (by one estimate, nearly 70 percent of the U.S. population uses them), and with it a demand for bandwidth, municipalities in the Highlands have resisted the industry’s perceived intrusion on scenic resources.

In Putnam County, Homeland Towers and Verizon last year sued Philipstown and Nelsonville after both municipalities denied applications for cell towers. In Philipstown, a tower had been proposed for a hillside along Vineyard Road, off Route 9. The Nelsonville tower would have overlooked the Cold Spring Cemetery.

In Beacon, Planning Board member Patrick Lambert said he has similar concerns about the potential for blight. “Once this tsunami starts, it’s going to be tough to reel in,” he said.

While 5G technology is on its way to Beacon, a fiber-optic network apparently is not. A Verizon spokeperson says the company has no plans (but declined to say why) to expand Fios, its high-speed internet, telephone and television service, into Beacon or Philipstown, although it is available in much of the rest of Dutchess and Putnam counties, along with Albany, Buffalo, Long Island, New York City and Syracuse. 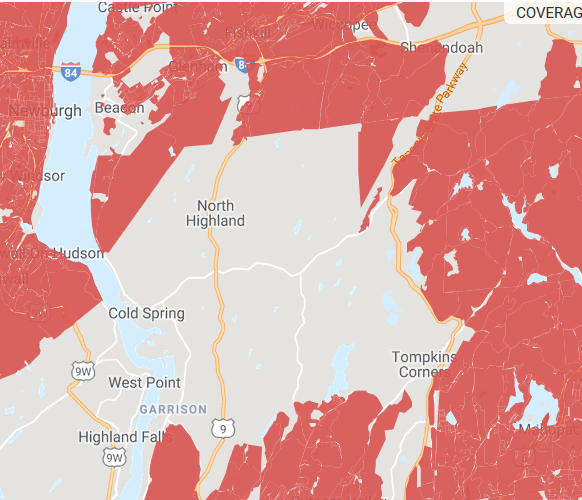 A coverage map for Fios created by Broadbandnow.com

The Howland Avenue application includes a map showing several Beacon sites “at various stages of development” for Verizon facilities, including the train station, an area called “Rombout,” the area near Cliff and Willow streets, an area called “Tioronda” and at the fire station.

While the federal government prevents municipalities from regulating wireless facilities based on health concerns — it leaves that to the Federal Communications Commission — it does give cities flexibility to regulate aesthetics.

The small-cell law adopted in Beacon last year, for example, requires a special-use permit from the City Council to install units on poles more than 50 feet high, within 20 feet of a home, or with equipment less than 15 feet from the ground.

Beacon’s older wireless telecommunications law, adopted in 2002, restricts radio towers and other wireless facilities in most cases from the waterfront or residential and historic zoning districts. Planning Board members on Tuesday said they’ll recommend that the City Council consider scenic viewsheds, as well, when reviewing applications.

But John Clarke, a city planning consultant, noted that could be difficult to implement. “Anyone can say ‘That’s my viewshed, so it’s important,’ right?” he observed.

Meanwhile, Beacon resident Stanislaw “Stosh” Yankowski has cautioned the council for months that the electromagnetic radiation, especially at higher 5G frequencies, emitted by cell phones and other wireless devices is more dangerous than the FCC is letting on.

“These things are eventually going to be all over the city,” he said, referring to the small-cell units. “It may take a few years to build out, but there are people out there that are electromagnetic sensitive.”

There is no conclusive science on potential health risks, and scientists have not identified any way that electromagnetic radiation could cause cancer. The National Cancer Society notes that it’s difficult to study “because the majority of individuals in the general population are exposed only intermittently” and individual exposure varies by population density, distance from the source, and the time of day or day of the week.